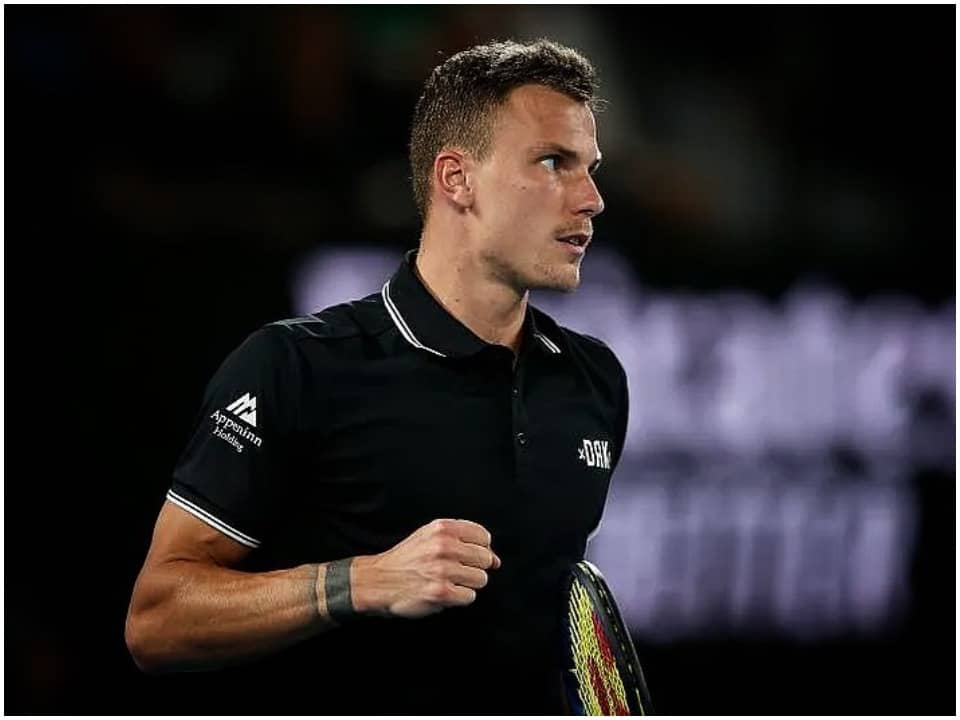 Márton Fucsovics is a Hungarian professional tennis player. The Ironman of Tennis, Marton Fucsovics came up as a huge surprise in the Wimbledon 2021. He reached into the quarter-final and all pumped up to face Djokovic and will try his best to win it in order to cement his place in the semi-final. Marton has achieved a career-high ATP singles ranking at no. 31 for high ATP singles.

He was born on 8th February 1992 in Nyíregyháza, Hungary. Marton started playing tennis at the age of 5 years. He very quickly achieved the rank in tennis and at the age of eight, he started playing in the field with 3-4 years old of age groups. In 2003, he first won the national championship of his age group and also for Nike Junior Tour. With that achievement, he got the chance to represent Hungary in the world Final in Sun City, South Africa. Marton was also having some talent related to basketball during his teenage but he chose to pursue Tennis as his career.

Fucsovics got his first success in 2009 when he won the US Open Boy’s Doubles title and in the consecutive year, he reached the semi-final of Australian Open Boys’ singles. A few months later to this title gaining championship, he won Wimbledon Boys’ singles. Throughout the entire tournament, he didn’t lose even a single set. He also participated in Doubles’ event along with Czech Libor Salaba and quickly reached the quarter-finals. Later this in 2011, he reached the semi-finals of 2010 US Open Boy’s Singles but he lost this championship to Jack Sock.

Marton was already connected with the U-18 national tennis team due to which he became an integral part of Hungarians. When he was in the team, he won the prestigious Valerio cup in Venice and was tagged with Hungary’s first-ever Boys’ European Summer Cups title. Marton worked hard his way to gain the title of being No. 1 in the ITF Junior Rankings 2010. As a result, he entered the Youth Olympics tournament but suffered a sudden loss in the quarterfinal against Oliver Golding.

In March, Marton reached the biggest final at Rotterdam but lost the title to Andrey Rubley. However, with this game, he returned to the top 50s in ranking. This was his second defeat out of five losses to Rubley in October 2020 including the other three consecution defeats in the quarterfinals at Dubai Championship, the second one at Qatar Open, and the third at 2021 Miami Open. Marton reached the quarterfinals of the 2021 Wimbledon Championships for the first time in his career. He, then, became the first Hungarian man in Wimbledon to reach this title since Jozsef Asboth in 1948.

In his 17th major main draw, he reached quarter-final and won the world’s no. 48 among all from his country making as last 8 since Balazs Taroczy in 1981. Marton reached the quarter-finals of Wimbledon, one of the best feats of his career probably. However, he couldn’t achieve the dream of winning it as he lost to defending champion and world no. 1 Novak Djokovic with a score of 3-6, 4-6 & 4-6. With this result, he guaranteed his result rank to be in the top 40s in the rankings.

Marton Fucsovics has a pair or a girlfriend. Although he has kept his life to be private from social media and profiles, has disclosed his pair with Anett Böszörményi. He is engaged with Anett for the last 3 years. Apart from Anett, he has no other relationship or commitments. He has developed his love for pets. He has a dog named Berry as a pet.