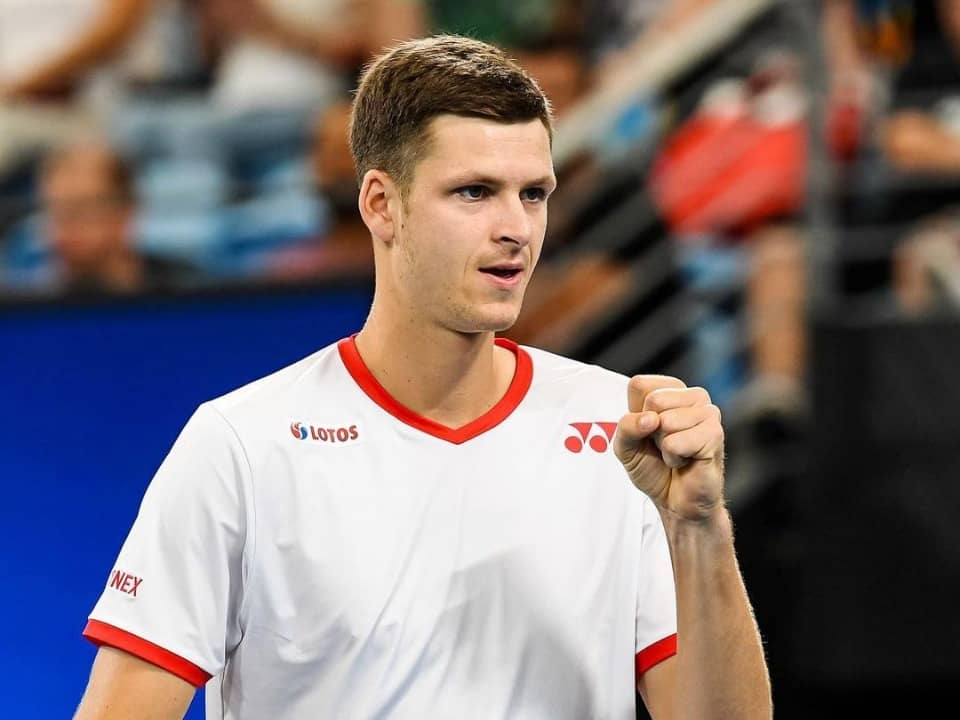 Hubert Hurkacz is a professional tennis player from Poland who was born on February 11, 1997. He is the current Polish No. 1 and has a career-high singles ranking of world No. 16 and a doubles rating of world No. 70 (both reached on 5 April 2021). Hurkacz, who won the 2021 Miami Open, is the first Polish player to win an ATP Masters 1000 singles championship.

Hurkacz comes from a family of athletes. Zofia Maliszewska-Hurkacz, his mother, was a Polish junior tennis champion. His uncles were both tennis players, while his grandfather was an international volleyball player. Hurkacz started playing tennis when he was five years old when his mother introduced him to the sport while she was practicing. His initial teachers were his mother and father, Krzysztof. Hurkacz attended courses and began to play more often. While watching Roger Federer on television, he grew interested in professional tennis. He has claimed that if tennis was not in his plans, he would most likely pursue basketball, motor racing, or further study.

Hurkacz, together with Kamil Majchrzak and Jan Zielinski, belonged to a group of the most gifted young Polish tennis players by 2014. Hurkacz reached the 2015 Australian Open boys’ doubles final as a junior. He qualified for the Next Gen ATP Finals in Milan in 2018, when he defeated Jaume Munar but lost to Frances Tiafoe and Stefanos Tsitsipas. In Winston-Salem in 2019, he won his first ATP title after defeating Benoît Paire in the final. At Wimbledon in 2021, he reached the quarterfinals, which was his best Grand Slam performance.

Hurkacz made his US Open debut in August of 2014. He began in qualification and was attempting to qualify for his third Grand Slam main draw in a row. To get to the first round of the US Open, he defeated John-Patrick Smith, Egor Gerasimov, and Pedro Martinez Portero in straight sets. He met Stefano Travaglia there, who, like many others, had succumbed to the intense heat and had retired. Hurkacz was defeated in the second round by Marin, the 2014 US Open champion. Hurkacz competed in the 2018 French Open main draw, where he defeated Tennys Sandgren in the first round. This was his first Grand Slam victory and his first win in an ATP main draw event. In the second round, he was defeated in four sets by third seed Marin.

Hurkacz began his season in Pune, India, at the Maharashtra Open. He continued in the Canberra Challenger, where he defeated Ilya Ivashka in the final and won the title. Hurkacz then made his Grand Slam debut at the Australian Open. He defeated Corentin Moutet in the first round of the 2019 Dubai Tennis Championships, then went on to win over No. 1 seeded player Kei Nishikori, which was his first win against a top 10 player. Hurkacz was defeated in three sets in the quarterfinals by Stefanos Tsitsipas, the tournament’s eventual runner-up. Hurkacz made it to the quarterfinals of an ATP Masters 1000 event for the first time in his career at the 2019 BNP Paribas Open in March.

He defeated Kei Nishikori in the third round and Denis Shapovalov in the fourth round on his way to the quarterfinals. He lost to Roger Federer in the quarterfinals. Hurkacz defeated Alex de Minaur and Lucas Pouille at the 2019 Mutua Madrid Open. After winning the opening set, he fell in the third round to Alexander Zverev. He continued in the French Open, where he was defeated in the first round by world No. 1 Novak Djokovic. Hurkacz defeated three higher-ranked opponents at the 2020 ATP Cup: Dominic Thiem, Diego Schwartzman, and Borna Coric. Hurkacz, the sixth seed, continued his winning ways in the ATP Cup, advancing to the ATP Auckland Open semifinals with a victory over Lorenzo Sonego, Mikael Ymer, and Feliciano López.

He seeded No. 31 at the 2020 Australian Open, advanced to the second round, defeating Dennis Novak before losing in straight sets to John Millman. Hurkacz competed in the UTR Pro Match Series presented by Tennis Channel in West Palm Beach, Florida, in May. In Winston-Salem in 2019, he won his first ATP title after defeating Benoît Paire in the final. Reaching the third round of a Grand Slam, as he did at Wimbledon in 2019, is his best result. In 2021 Wimbledon, he continued his brilliant form as he reached the semi-final and lost with a score of 6-3, 0-6, 7-6 & 4-6 to Berrettini.

There is no evidence that Hubert has a girlfriend. On his Instagram account, there are no indications of him. Fans, on the other hand, were surprised to see some girls cheering him on during his recent trip to Miami.