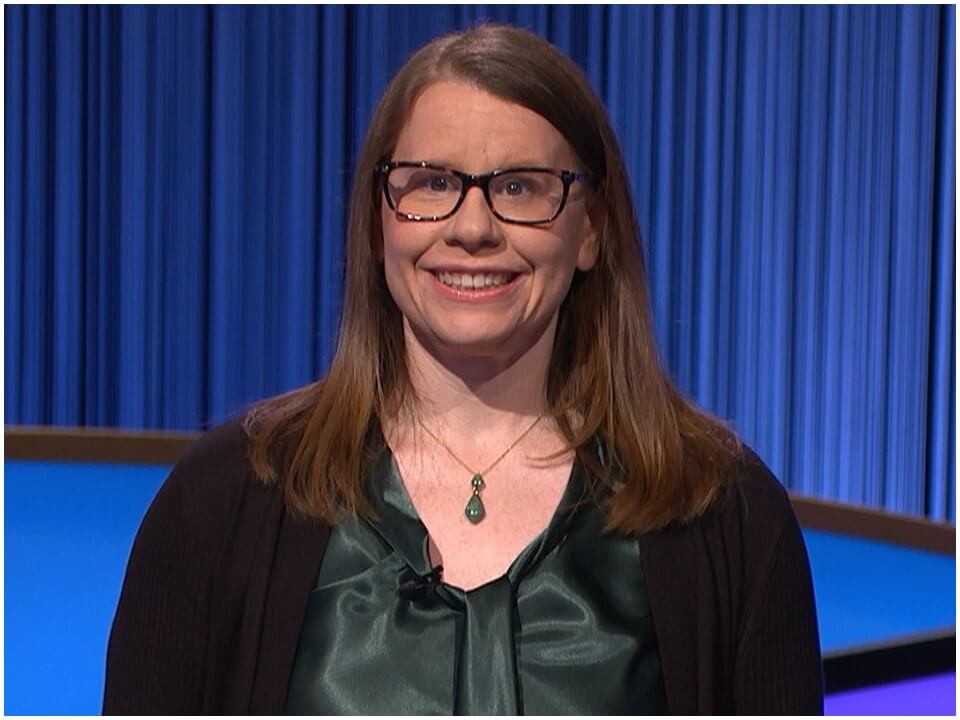 Margaret Chipowsky made a historic event on the show Jeopardy! by earning the winning streak. She stole the last-minute upset in a pretty thrilling episode of the game show. She describes herself as a lawyer who was born in Hopewell Valley, NJ, and is now available on the set of Jeopardy! with her winning prize of $18,800 as her first victory day of the show. Margaret will return to the show on 22nd March and will have the opportunity to earn more money. It is quite exciting and thrilling to watch the intelligent lady rooting for the questions on the set of Jeopardy!.

Margaret was born in September 1979 and brought up in Titusville. She is the daughter of Michael Chipowsky and Mary Jane Chipowsky. Her father, Michael Chipowsky is a former police chief who has given his duties towards Hopewell Township from 1995 to 2006. She is a graduate student of Hopewell Valley Central High School. She is now residing with her family in Lawrenceville and is working as an attorney at MDAdvantage Insurance. On the show “Jeopardy”, Margaret Chipowsky revealed that she has been watching the show as a kid or all-time in her life with her mom and dad.

Her parents still watch the show every day. Margaret said that she entered the show in December 2021 and later traveled to Los Angeles, California for the “tape day” in January 2022. She had the audition and she was picked but was unknown as she could ever be picked. She explained that her father has never been able to get information out of her but he was beaming like he and her mother both are proud of their daughter. Margaret tried for Jeopardy! for twenty years before finally making her journey on the show. Her parents wished her luck and all the best for her future journey on the show.

Finn Corrigan, who has been maintaining his journey for the last four days on the set, entered Monday night’s game show as the returning champion. He carried forward his two-day earnings of $39,602, which is quite impressive for a student from Vista, California. On Monday (21st March 2022), Finn Corrigan had the face-off with a Portlander named Karen Johnson (a member acquisition coordinator) and a New Jersey-based lawyer Margaret Chipowsky. She had her first jump out of the early lead of the show during the first round of Jeopardy.

She gave nearly eight answers correctly out of nine answers and had the total winning of $3,800 followed by Finn Corrigan and Karen Jonson, as both tied with the amount of $1,800. Things got competitive when during the Double Jeopardy round, Johnson found herself with the winning streak of $15,400 in the second set of questions followed by Corrigan with the winning of $11,400 and Chipowsky with $9,800. The final Jeopardy round set a different story for all three contestants. Margaret became the only contestant who answered the clue correctly.

She became a strong contender on the set of Jeopardy and earned a total of $18,800 followed by Finn and Johnson. Chipowsky surprisingly upset the game in the final Jeopardy round when she was trailing her fellow competitors Karen Johnson and the returning champion FinnCorrigan. She put her $9,000 as the betting amount for the final Jeopardy and answered correctly for the clue in the category of “singers”. She was the only contestant to answer the clue correctly. Margaret correctly guessed the name of the singer as Tony Bennett, where neither of her fellow competitors gave the right answer.

Margaret has not given any clue regarding her marriage life. It seems as if she is unmarried and is yet to disclose her past loving relationships. Also, there are no reports available on the internet about her husband or previous relationship as well.

Margaret Chipowsky has been earning a moderate life with her work in the field of law. She describes herself as an attorney who has been working with a company named MDAdvantage Insurance for years. It seems that she is capable of earning herself. Also, on the set of Jeopardy, she made the total winning amount of $18,800 making her lead the show on the day of 21st March 2022.