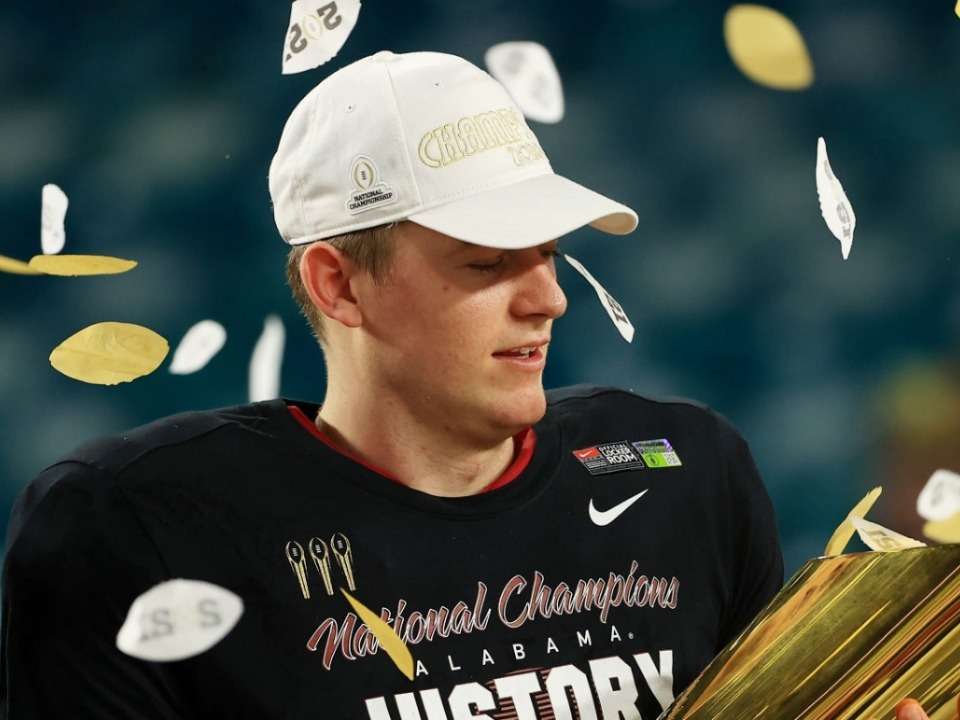 Mac Jones became a national sensation after being drafted in the earlier mock draft by the New England Patriots. He is an American football player who plays at the quarterback position and he has been a college football prodigy and is now a successful professional player. Mac showcased his skills in the NFL preseason game against Washington and is currently in the news despite being a rookie. Patriots make an unexpected move just a while ago by releasing Cam Newton and appointing Mac Jones as starting quarterback.

Mac Jones was born on September 5th, 1998 in Jacksonville, Florida, USA to his parents Gordon Jones and Holly Jones. His whole family is quite athletic and active in sports. His father was a tennis player at Florida State University and Flagler college but there is not much information available about his mother. He grew up in Florida with his two siblings Will Jones and Sarah Jane. His brother Will was a soccer player at his college, Mercer University and his sister played Tennis at the College of Charleston. Mac himself started playing football when he was five years old. Mac has not shared much about his early education but it is known that he attended and graduated with a high school degree from The Bolles school.

He was an active part of the football team during his high school days. Later to pursue higher studies, he joined the University of Kentucky but he later changed his college in 2017 when he was offered a scholarship by the University of Alabama. He was taken in the college football team in which he was positioned as a quarterback. He completed his Bachelor’s degree in business communications in 2019, he went on to do a Master’s in sports hospitality and management. The year-long program ended in December 2020 and he finally graduated from college with a master’s.

Ever since his school days, he started playing football which he continued in high school on a local level. Although, his career started when he started playing in the college football team “Crimson Tide” in 2017. His first match was Crimson Tide’s spring game where he was titled the MVP. The following season, he played 14 games and also made new records when he gave a 94-yard touchdown pass, second-longest in school history, against a game with Louisiana-Lafayette. In the 2019 season, he replaced an injured member as a starter and played well with securing 14 touchdown passes in 11 games. In 2020, when the original starter departed, he was positioned as a starter permanently.

The team played and won several matches and secured a spot in the 2020 SEC championship game. They played against Florida Gators and won with a great score. The win secured their entry to the 2021 Rose bowl semi finale game which they also managed to win. Mac also played with the team in College Football Playoff National Championship 2021. The team won in the last match against Ohio state Buckeyes and Mac secured 4500 yards and 41 touchdowns. He received several awards for his performance like the Davey O Brian awards, Johnny Unitas Golden Arm awards, and Manning awards. After the season, he was selected by the New England Patriots in the 15th Overall pick and he announced he would forgo his senior year and join the 2021 NFL draft.

Since he is one of the best newcomers in the professional scene, people want to know more about his personal life. He is currently in a relationship with Sophie Scott. The two met at the University of Alabama and have been dating since 2019. Sophie is a physiotherapist and also practices occupational therapy. She works at the University orthopedic clinic and spine center Tuscaloosa. She is also a social media influencer and model. The couple is currently in a long-distance relationship with Sophie settled in Tuscaloosa and Mac traveling for matches but Sophie always tried to attend all of Mac’s matches and support him.

Mac Jones has worked as a football player since high school and college and has won various matches and tournaments with the team. He has earned through price money received over the years and also through scholarships but as a college athlete, he was not paid. He has recently started his professional career in NFL and has also done various endorsements in this short time. As this is just the beginning of his professional career he does not own much wealth and assets at this point.  His estimated net worth as of 2021 is around $300,000.