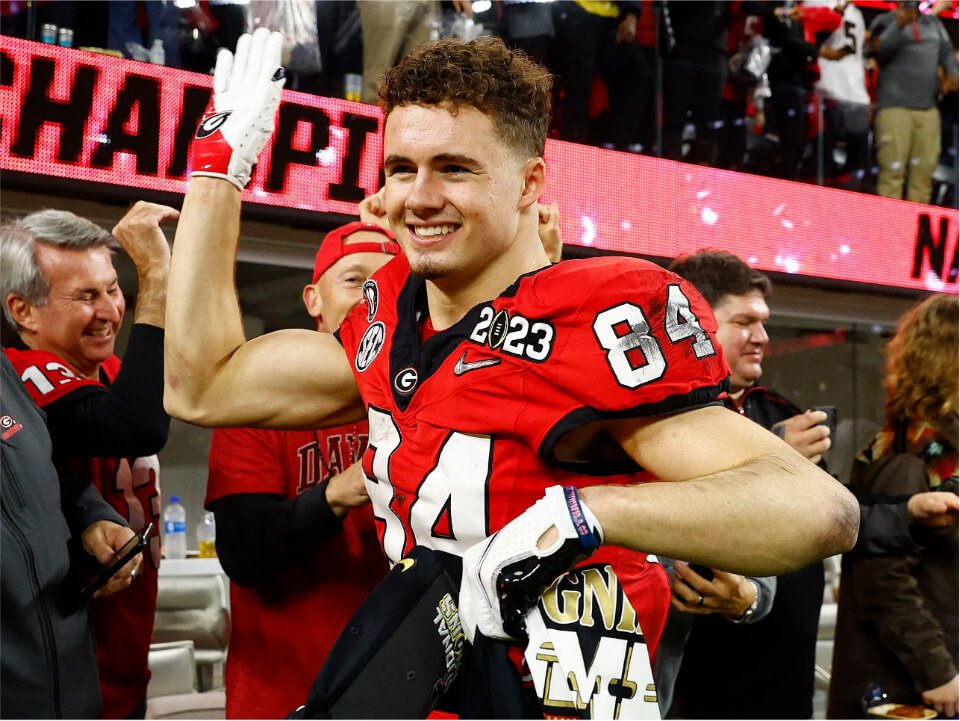 Ladd McConkey is an American Athlete, best known as a football wide receiver for the Georgia Bulldogs – No. 84 jersey. His contribution in the recent win to claim the second national title Georgia Bulldogs didn’t go unnoticed as so many NFL scouts are already keeping their eyes on him.

Ladd McConkey was born on 11th November 2001 (making him 21 years old as of 2023) in Chatsworth, Georgia, United States. He completed his education at North Murray High School in Chatsworth, Georgia. On 2nd February 2020, he committed to the University of Georgia and majored in Finance. His late grandfather is Vic McConkey.

His father Benji McConkey was a star quarterback player (from 1993 to 1994) at Dalton high school. He is the middle child and has an adorable sister named – Laine McConkey graduated from Murray County High School. His brother named Hinton McConkey is also committed to sports and plays as a quarterback for the University of West Georgia in Division II (2018).

Ladd began his career as a Georgia scout team member and wore a red shirt. He made the varsity team as a freshman and played while being at different positions – quarterback, running back, defensive back, and punter. He was also a return specialist. As a freshman year, he caught five touchdowns with 28 receptions for 430 yards.

His first career touchdown came against Vanderbilt. He also rushed for one touchdown. Once while playing against Auburn, he made record-breaking scores- 135 yards and scored one touchdown. Eventually, he was named the SEC Freshman of the Week after earning the 34-10 winning score.

He played in all of Georgia Bulldogs football games making seven starts. He scored two touchdowns, one receiving, and one rushing, against Oregon in the 2022 season opener. After that, he recorded a career-high six receptions against Kent State.

The following week against Mississippi State, he would rush for a 70-yard touchdown while also adding a 17-yard receiving touchdown. On 3rd December 2022, he left the SEC Championship Game against LSU, due to knee tendinitis. In the 2023 College Football Playoff National Championship Game, he recorded five receptions for 88 yards and two touchdowns in a 65–7 victory.

Ladd has been involved in a relationship with 21-years old Sydney Horne since December 2017. They have known each other since they were in fifth grade. His girlfriend, Sydney graduated from Northwest Whitfield High School. She is from Georgia and known as the daughter of Jon Horne (Father) and Amanda Defore Horne (Mother). She was with Ladd on Signing Day when he was a standout athlete committed to the University of Georgia.

Later, she is a regular presence for game matches. The couple regularly shares close pictures on Instagram. On Ladd McConkey’s Instagram on 16th April 2019, he shared prom pictures with SYD HORNE and wrote the caption – “Had the most amazing time at prom thanks to my beautiful girl❤️”. Later, on 1st December 2022, @sydneyhorne wrote the caption on her Instagram  – “5 years of love, growth, & way too much happiness!! 5 down & so so many more to go🫶🏻 love you more than ever❤️”

Ladd McConkey is a young footballer and committed to the University of Georgia as a three-star recruit. Currently, he is playing in his third season. He earned mainly from social media platforms. He worked with The Seven-Six, Apparel Co., and sold the LADD MCCONKEY Tee collection, which cost $29.76 each. It is safe to say that Ladd’s estimated net worth is around $80K.