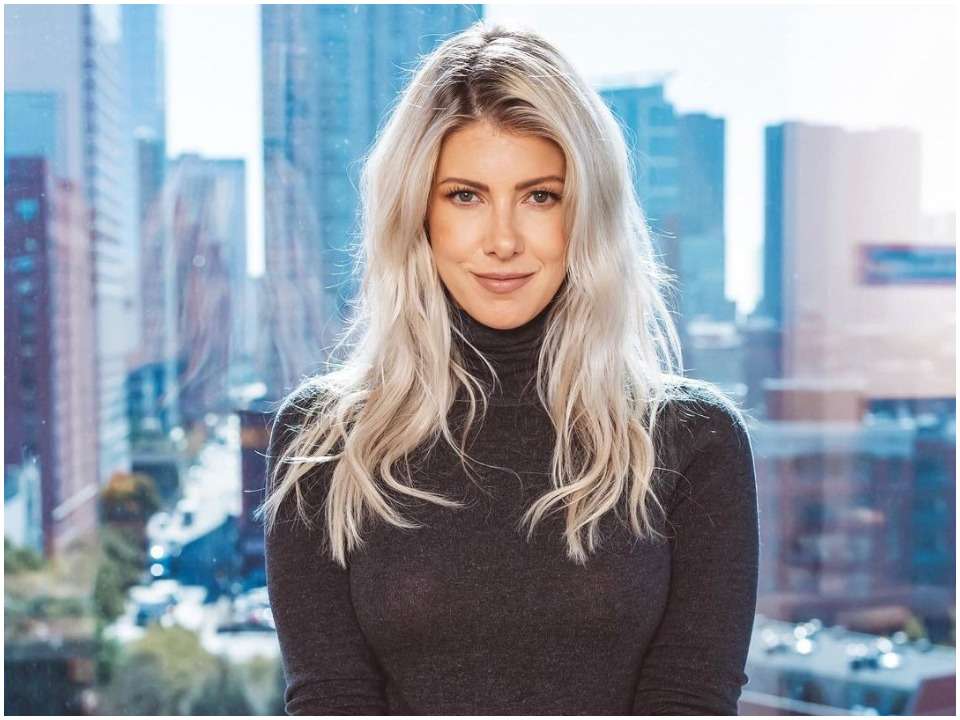 Kelly Rizzo is an actress. She is best known for her shows “unfiltered with Kelly Rizzo” (2018), “Extra with Billy Bush” (1994), and “Fablife” (2015). She also attained the limelight after she got married to the famous comedian Bob Saget. Kelly is no longer a stranger to the television industry. She has done many shows, series, blogs and appeared on television frequently.

Kelly Rizzo was born on 19th May 1979 in Chicago, Illinois. According to her ETR’s website, she describes herself as a “blonde Sicilian with a rocker-chic personality”. She recently gained huge popularity because of her food, travel blogs, and stories. She documents all her stories on her blog by the name “Eat Travel Rock”. The blog became famous in recent days making her gain immense popularity. Not only this, her blogs were so much loved by the audiences and her fans that it was later published in the form of a TV show. It was successfully aired on television in the past five years. Because of her shows and her blogging style or her way of describing things about traveling, she was named “Travel Queen” by Modern Luxury’s Michigan Avenue Magazine in 2017.

She is a well-known personality on Instagram and has gathered more than 150K followers on that particular platform. Just like her husband Bob, Kelly is not a stranger to the industry. She hosted a show called Eat Travel Rock that goes behind the scenes of travels across the world, behind the scenes of master chefs and rockstars. On her website, Kelly Describes herself to be “the blonde Sicilian with a rocker-chic personality”. She is an enthusiast of traveling and loves to carry her experience in the form of lifestyle and expertise. Kelly got herself featured on ABC, Bravo, EXTRA, and others.

Bob Saget was already married to his first wife named Sherri in 1997. Kelly and Bob got engaged in 2017 and later tied their knot in 2018. At the time, Bob Saget (who remained an actor for the show How I Met Your Mother) told US Weekly that he never planned to have another relationship in his life. This time he was going to connect with Kelly and it was going to be a big change for him. Kelly and Bob Saget spent their beautiful four years together. They recently posted a picture of themselves in December 2021 on the eve of Christmas. Kelly shared a heartwarming Instagram post with her husband on the festive day and a few days before her husband’s demise.

In one of his interviews, Bob Saget revealed that he never thought that he would ever find true love in the form of Kelly Rizzo (who caught his eyes) after getting divorced from Sherri Kramer. Bob Saget had remained a famous personality for the show “Full House”. He was married to his first wife Kramer for almost 15 years. But, they called it a quit in 1997. The former couple shared three daughters ahead of their divorce. Their three daughters are named Aubrey (born in 1987), Lara (born in 1989), and Jennifer (born in 1992).

As their children grew up, Saget was introduced to Rizzo and got a second chance in the form of her to show his love. The pair first announced their engagement in November 2017 after spending nearly two years while dating each other. Thereafter, the pair tied a knot. The pair also revealed their thoughts to US Weekly and said that they didn’t see themselves expanding their family further as Bob Saget was already having three daughters from his previous relationship.

At the time, Bob Saget called his then-fiance “magical”. He said that Rizzo has developed a connection with his three daughters. He also added that had been playing his role as a dad for many years and will soon be a grandfather in the future because one of his daughters was having a boyfriend at that time. The two told the US Weekly that they are thinking of hosting “really a small” wedding or ceremony.

They hoped to give their guests a “laid-back experience on a special day in October 2018 when they were expecting to exchange their vows. Throughout their marriage, the pair documented a fun-filled vacation. They were seen many times together spending date nights, low-key life at home while posting pictures on their respective social media. And since the world was hit by the pandemic in March 2020, Rizzo showed her love on social media expressing how grateful she is to have a husband like Bob Saget.

Kelly Rizzo is a food and travel blogger. She appeared in the TV show called “Eat Travel Rock” (ETR). She co-hosted the show with great enthusiasm and it ran successfully. Kelly belongs to Chicago and is currently residing in Los Angeles. She is for sure earning a hefty amount because of her blogs, TV shows, and other assets or involvement in the entertainment industry. Also, her husband Bob used to earn quite a good amount of money before his demise. They together make a net worth of somewhere between $2 million to $5 million.