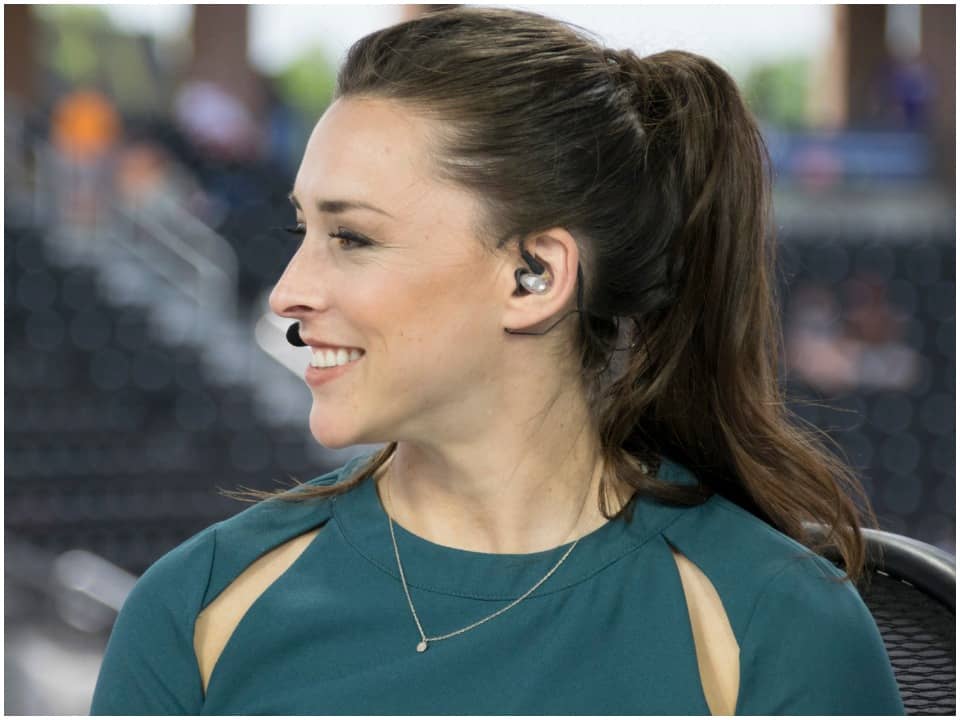 Kayla Braud is a former American Softball player and analyst famously known to work for ESPN and SEC network. She had a successful college softball career and was a three-time All-American now working as a professional and well-known analyst in the field.

Kayla was born in Eugene, Oregon, the USA on 1st August however exact year isn’t available so we assume she might be in her late 20s. She was born to her parents Denny Braud and Kelli Braud. She is known to have grown up with her three siblings, sister Megan and two brothers, Joey and Andrew. Kayla was inspired by her grandfather Bo Hammit who was a softball coach and also coached her during her high school years. she was born in a Christian family and is of white Caucasian ethnicity. She is currently in her late 20s

Kayla has not shared much about her early education but it is known that she completed her high school graduation from Marist school in Eugene. She was highly active in softball during high school and was part of the school’s team. Kayla graduated in the year 2010 and went on to join the University of Alabama for her college studies and finished her graduation in 2013 with a Bachelor of arts degree in Public relations. She was also part of the college football team, Crimson Tide.

Kayla started her career as a high school softball player. She was part of the high school softball team at Marist school where her grandfather was the coach and played for the team Eugene thunder for almost ten years. Kayla led the team to Nationals seven times and instantly broke records in her freshman year at high school and became the first all-state honouree and most valuable player during all four seasons of her high school. She was the Oregon 4A player of the year in her Junior and senior seasons and was named as Number 1 record-breaker by ESPN Rise.

In 2010, she graduated from high school and joined the University of Alabama. She was part of the college team- Crimson tide as an Outfielder. Kayla immediately became the SEC freshman of the year in her freshman year and was also among the top 10 finalists for USA player of the year. She also broke the Alabama single record for batting average with a 0.505 clip which was also the third-best nationally.

In her sophomore year, she was again titled on various occasions for her performance in the season and became the Capital One Academic All-America softball team and an NFCA All-America Scholar-Athlete. In the USF Tournament, she scored seven runs and had a game-hitting streak of 28 which led to the second-longest streak in the History of the Crimson Tide. The following year, she was again named the Capital one academic all-American player for the second time in the row and became the national champion with the 2012 women’s college world series crown.

In her senior year, she again received several honorary titles and became the 2013 class award winner which honors the attributes of NCAA Division I senior student-athletes in four areas: community, classroom, character, and competition. Besides her sports career, 2010, she also worked as an individual hitting and fielding coach and also interned at the Brand Marketing Department for a few months in her senior year 2013. Kayla was immediately hired after her graduation as a college softball analyst by ESPN in 2014. She started covering the season and postseason of the game and worked as a commentator and studio analyst. She later joined the SEC network and became the co-host for the show Rally cap along with Dari Nowkhah where she would talk about weekly softball games and progresses in the field of softball and baseball.  In 2019, she started working as an in-game analyst for the SEC network.

Kayla is highly active on social media platforms. On her Instagram account, she currently has a total of 6152 followers where she likes to share snippets of her work, old memories from hr college games, pictures with friends, family, etc. She is also known to be on Twitter since 2011 and currently has 11.1k followers. Other than this, she is not known to have any social media account like Facebook, Snapchat, etc.

Kayla has not shared much about her personal life but it is known that she is currently married to her long-term boyfriend David. The couple got married in august 2017 and have been together since then. she has often shared her wedding pictures on her social media and celebrates their anniversary every year. The couple is not known to have any children as of now but has hinted at plans in near future. She has kept her life private and has not shared much with media and on social media as well.

Kayla has been working as a softball analyst for several years and has been highly active in the profession. She had earlier earned through her successful softball career and later started majorly supporting her income through her job as an analyst. She has worked hard to build herself a comfortable lifestyle and her net worth as of 2021 is estimated to be around $1.5million.