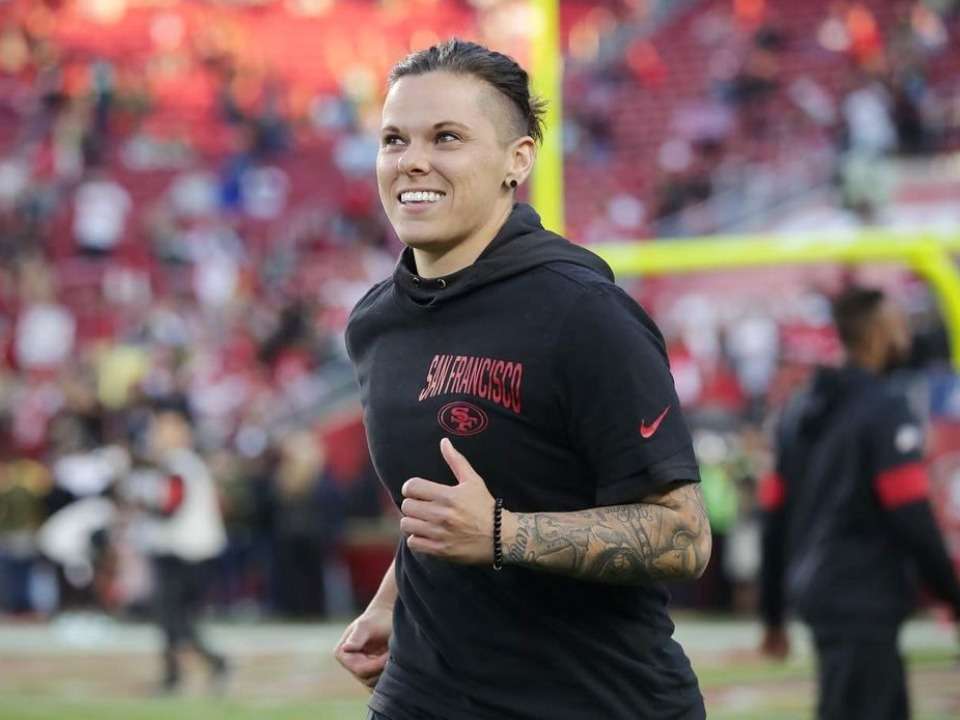 An American Football Coach, Katie Sowers stands out against all odds and represents her sexuality without any fear. She is considered the first female and openly gay coach in Super Bowl history. She is a courageous lady, who exquisitely challenges the world and proved her worth all over.

Katie Sowers was born on 7th August 1986 in Hesston, Kansas, United States to Floyd Sowers, who was an educator, coach, contrarian, and prolific Facebook satirist who died on 19th June 2020 at the age of 72 and Bonnie Sowers. She shared her childhood with her elder sisters Stephanie Sowers and her twin sister Liz Sowers, who is the player of the West Michigan Mayhem, the Kanas City Titans, and the Kanas City Tribe.

Katie went to gain knowledge from Hesston College and Goshen College in the 2000s for her post-secondary education. For her further studies, she attended the University of Central Missouri in the 2010s and graduated with a Master’s degree in kinesiology in 2012.

Sowers initiated her football career while playing for the woman’s football alliance for the West Michigan Mayhem and the Kanas City Titans when she was studying at Goshen. She was a part of the Woman’s national American football team. Later she got retired in 2016 due to her Hip injury. In the same year, in summer she joined the National Football League with Atlanta Falcons as an intern. She worked with Falcons and served as an internal scout till she got transferred to the San Francisco 49ers in June 2017.

She got recruited by the ‘Bill Walsh Diversity Coaching fellowship’, which helps minorities to get into NFL coaching positions. Later she became a seasonal intern before being converted to full-time offensive assistant. Her contract with the 49ers expired after the 2020 season.

Sowers is seen active on social media while posting several pictures and videos. On her Instagram account @katesowers, she has a huge fan base of 178k followers, she promotes the Gay Community there and shares her pictures playing football. On her Twitter account, she has gained around 59.6k followers under the username @KatieSowers.

Katie has been in a romantic relationship with her girlfriend Cara Catures. Cara was not out as gay before dating her. The couple shares their cozy pictures on social media. The information regarding Katie’s past dating life is not out yet. Currently, they both are fighting all the odds to be with each other and are happy to reveal who they actually are.

Being able to live her dream life as a coach, she has accumulated a decent income over these years and is expecting more. Her estimated net worth is $1.5 million and her annual salary as an offensive assistant coach of the San Francisco 49ers has not yet revealed. She is at present, living a happy and luxurious. She earns her fortune mostly through her professional career being a football coach.