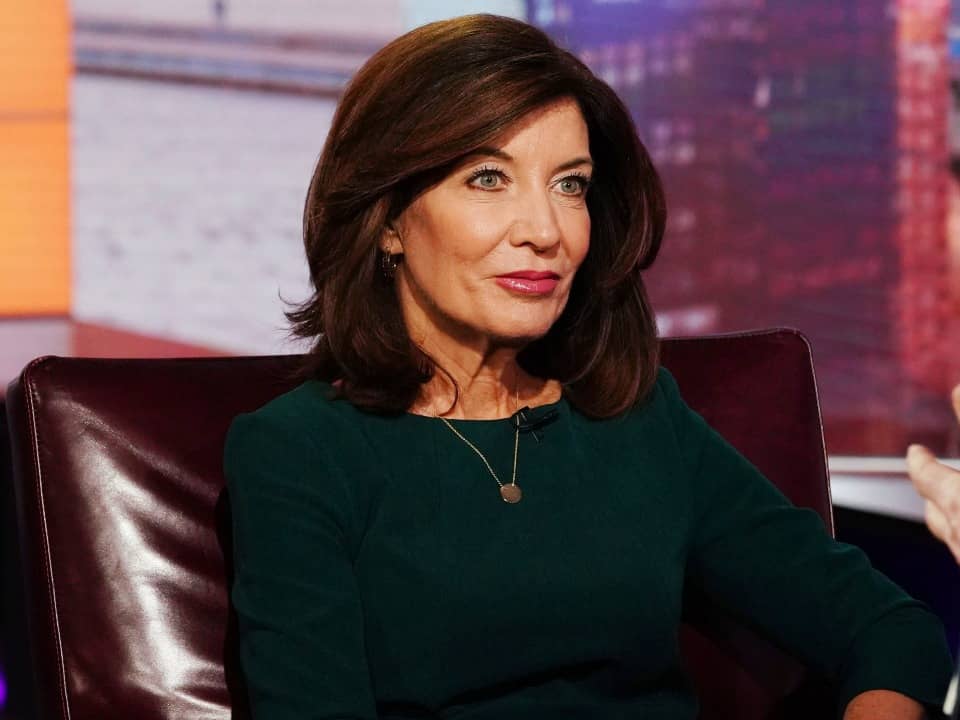 Kathy Hochul is an American Lawyer who is currently serving as the lieutenant governor of New York. Before being in this position, she was the US representative of New York from 2011 to 2013. She was also chosen as the first Democrat in the district in the last 40 years. Kathy was the country clerk of Erie County from 2007 to 2011. Before this, she was a member of Hamburg, a practicing attorney, and a legislative aide.

Apart from all these positions, she has also worked as a government relations specialist. After Cuomo’s resignation, the democrat Kathy took the charge as the first female governor of New York and said to end “distractions”. Kathy replaced Andrew Cuomo and won the primary election for the nomination of New York Governor from the Democratic party.

Kathy was born on 27th August 1958 and raised in Buffalo, New York. She is the second of all six children in her family. Her parents were named John P. Courtney and Pat Courtney. Her father was also called by the name “Jack” and was a clerical worker while her mother was a homemaker. Her family had to struggle because of the financial crisis. During her early years, she had to face these crises while living in a trailer near a steel plant. By the time Hochul attended college, her father started working for an IT Company to which he headed later.

Kathy started her political career during her college days at Syracuse University. During her college days, she participated in many events leading to the welfare of students. She had to lead the boycott of the bookstore over a price hike. In the student newspaper “The Daily Orange” she was awarded grade “A” citing the changes made in college. She received a college degree BA from Syracuse University in 1980. Later in 1984, she received JD from Catholic University Columbus School of Law.

Soon after graduating from law school, Kathy Hochul started working for a Washington DC law firm but soon got unsatisfied because of the work presented there. Afterward, she worked as a legal counsel and legislative assistant to John LaFalce (US Representative) and Daniel Moynihan (US Senator) and later with New York State Assembly before officially seeking the elected office. While in her political career, during her earlier days, she became involved in local issues. She was elected as a Democratic and conservative party candidate for Hamburg in 1994. By gaining that position, she served the board for almost 13 years till the year 2007. While being in this position, she led many efforts to remove toll booths.

In May 2003, Kathy Hochul was appointed as deputy of Erie County clerk David Swarts. And when Swarts left the office in 2007, Governor Eliot Spitzer appointed her for the post. In an intervention, Kathy Hochul opposed the decision of Spitzer allowing the undocumented immigrants to apply for a driver’s license without gaining a social security card. Later in 2007, she was elected to fill the remainder of Swart’s term. She was re-elected for four ballot lines including Working Families Party, Independence, Democratic and Conservative. She was served with 80 percent of the votes and gained the position defeating Republican Clifton Bergfeld.

Recently in August 2021, Kathy took the center stage. Kathy took the responsibility to lead the case of Governor Andrew Cuomo who was found to be involved in sexual harassment allegations and Kathy was appointed to take the five-month investigation into it. Kathy was appointed to seek the decision on whether he should have given the resignation or not. The findings of the investigation were submitted in a 165-page report where it was found that Cuomo sexually harassed 11 different women.

He harassed his current and former employees and one of those women hit back with her claims and set statements in public. Cuomo was claimed to harass these 11 women by involving in unwelcoming and non-consensual touching. He was also supposed to make sexual nature comments that created a hostile environment for the employees. Inquiries have already been set for these allegations where Cuomo had words to say that he was never involved in touching anyone inappropriately and sexually.

Kathy tied the knot with William Hochul who is a former United States Attorney- western district of New York. Currently, they reside in Buffalo, New York, and together have two children.

Kathy Hochul’s base salary is assumed to be $ 151,500 per year with an estimated net worth of more than $2 million. All this wealth she amassed came from her prosperous career which includes her private investments as well.