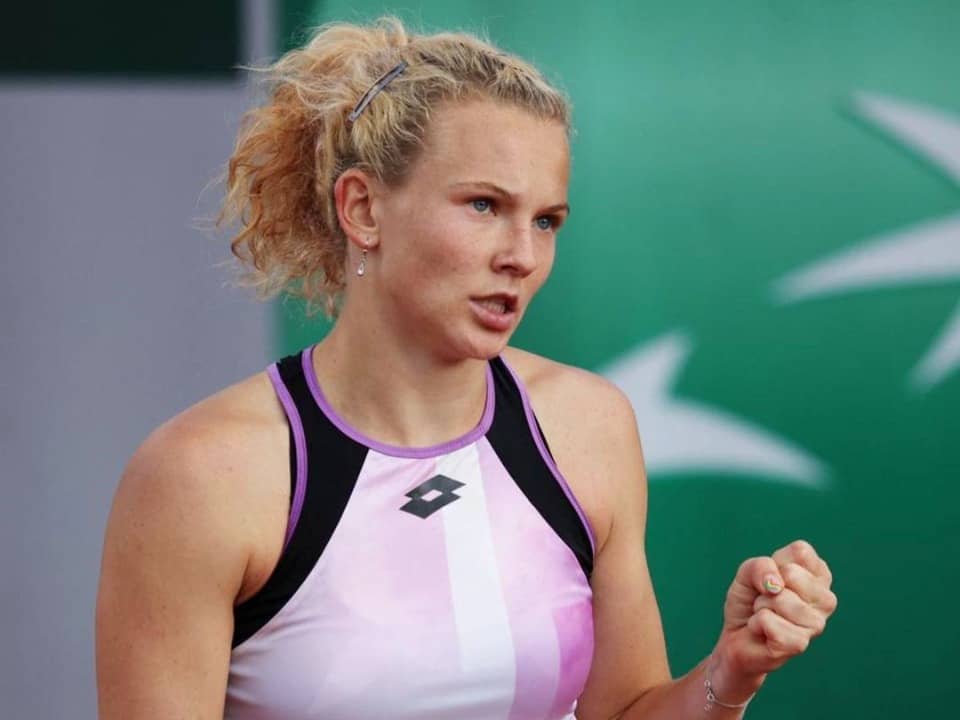 Katerina Siniakova is a professional Czech women’s tennis player who competes internationally. After winning two Grand Slams back to back with fellow country star Barbora Krejcikova, she became a former No. 1 doubles player at the 2018 French Open and the 2018 Wimbledon Championship. Katerina is all set to win yet again Wimbledon 2022 title in the Women’s double. The pair would be facing Lyudmyla Kichenok and Jelena Ostapenko in order to secure their place in yet another Wimbledon final.

She was born on 10th May 1996 in Hradec Kralove, Czechia, Czech Republic. Siniakova is the daughter of a Czech mother, Hana, and a Russian father, Dmitry, a former boxer and her coach. In June 2012, she began competing on the ITF Women’s Circuit in the Czech Republic. She won her first ITF championship in a doubles competition there. In December of 2012, she was ranked No. 2 in the world for junior tennis. She won the girls’ doubles titles at the French Open, Wimbledon, and the US Open in 2013, alongside fellow Czech Barbora Krejková.

In June 2012, she made her ITF Women’s Circuit debut in the Czech Republic. She won her first ITF championship there, in a doubles competition. In 2013, she made huge strides. She began the year outside the top 1000 in both singles and doubles but ended the year inside the top 200 in singles and the top 300 in doubles. After defeating Kathinka von Deichmann in three sets in the $10K Frauenfeld in March 2013, she earned her maiden ITF singles title. Siniaková made her WTA Tour debut two weeks later, competing in the Miami Open qualifying draw. She advanced to the main draw after defeating Mandy Minella and Alexa Glatch in qualifying, but she lost a three-set match against Garbie Muguruza in the first round.

She reached her first major ITF final, the $75K Sharm El Sheikh doubles event, in November 2013, but lost to Anna Morgina. Katerina made her Grand Slam debut at the 2014 Australian Open after passing qualifiers, although she was defeated in the first round of the main draw by Zarina Diyas. She made significant improvement in singles in October 2014, reaching the semifinals of the Premier-level Kremlin Cup 2014 before losing to Anastasia Pavlyuchenkova in the semifinal round. Katerina performed better in singles at Wimbledon 2016, reaching the third round of the tournament for the first time, defeating Pauline Parmentier and Caroline Garcia.

She began the 2017 US Open by overcoming Peng Shuai in the first round, then defeated world No. 4 Simona Halep in three sets, claiming her first win over a top-10 tennis player. Her winning streak was extended after she defeated qualifier Nina Stojanovic and world No. 9 Johanna Konta. At the US Open, she defeated world No. 4 Caroline Garcia and former world No. 1 Garbié Muguruza. She and Krejková reached the final of the WTA Finals in doubles at the end of the season, however, they lost to Kristina Mladenovic and Timea Babos. Her first notable performance of the 2020 season came in the first round of the Premier-5 Italian Open 2020, where she overcame former world No. 1, Angelique Kerber. She was defeated by Daria Kasatkina in the same round.

She is in a relationship with a fellow younger ATP Australian star Tomas Machac. In the past, the pair confirmed this in a social media post and quite often shares photos of them having quality time together. Recently, Tomas was spotted in the Olympic game where she won the gold medal in a double event with Barbora.

Katerina is probably enjoying the best span of her career as she is making a handsome amount by following what she likes the most. She has won two back-to-back grand slams with Barbora so it’s obvious that she would be rocking so much wealth from her endorsements and sponsorship as well. Her current yearly salary is $6,542,004 while her net worth is estimated at around $2 million.