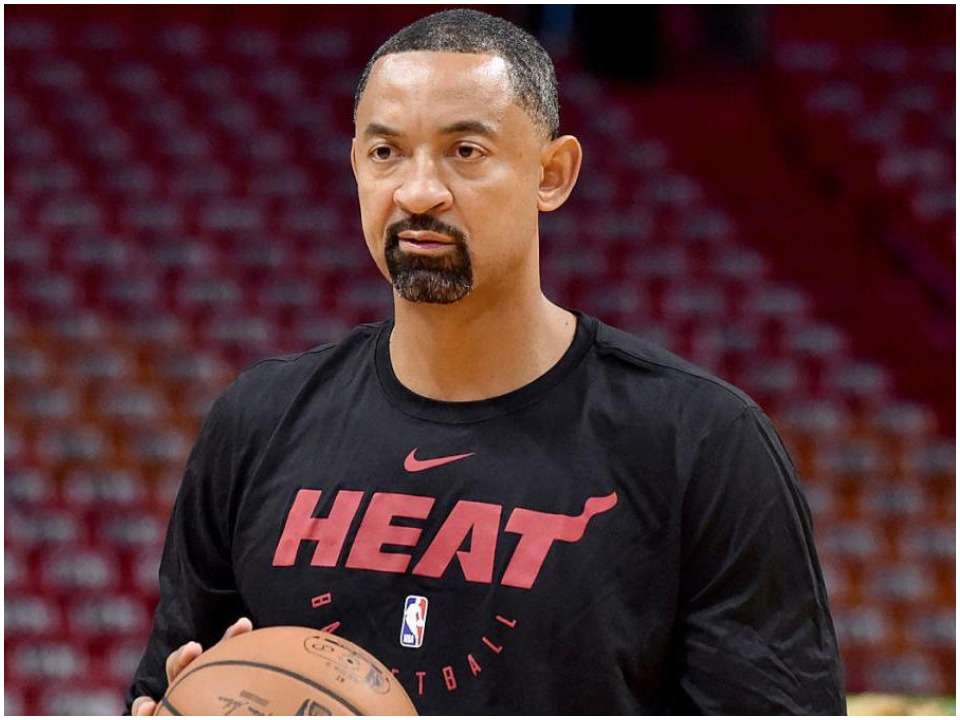 Juwan Howard is an American personality who is a former basketball player by profession and is currently heading the coaching work of the Michigan Wolverines men’s team. Previously, Juwan was the assistant coach for the Miami Heat of the National Basketball Association (NBA). He served in the NBA from 2013 to 2019 after he played for the NBA from 1994 until 2013. Juwan is currently in the news because he threw a punch on the face of Wisconsin’s head coach Greg Gard on 20th February 2022. The incident happened after the Michigan Wolverines lost the game against the Wisconsin Badgers and the head coach of the Badgers grabbed him with his left hand.

Juwan Antonio Howard was born on 7th February 1973 and as of 2022, he is 49 years old. Howard’s mother is Helena who was an employee at one of the Chicago restaurants when she became pregnant with Juwan. On the other hand, Juwan’s father Lorey Watson was working in the Army and had just returned to a phone company job in Chicago. The two married each other after they realized that Helena was pregnant with Howard. Juwan Howard’s mother who was (then) 17 years old didn’t want to get restricted because of the burden of a child.

This is the reason Juwan was adopted by Jannie Mae- Helena’s mother. Howard had no other siblings from his biological parents. His grandmother became the primary influencer of his life. Whatever he achieved in his life was because of her blessings. While growing up, Juwan always tried to keep his grandmother away from gangs and other members of society. He bought a three-bedroom apartment on 69th street on the side of Chicago and as he grew up and became one of the leading sports personalities, he became the pride and joy of his only relative by his side, that is, his grandmother.

He was 15 years old when he started his sophomore year in 1988. He was honored as one of the best sophomore basketball players in the Chicago metropolitan area. As soon as Juwan entered his junior year, he was listed as one of the best basketball players in Illinois. By that time, he was an honors student. After completing his junior year/season, Juwan became one of the leading and one among the top 10 Illinois players, who was invited back to Nike All-American Camp at Princeton. Juwan was named Most Valuable Player (MVP) at the Boston Shootout and Nike Camp.

Also, he was given the name of the best prospect in the country. He became the first NBA athlete and by this, he made a successful career in basketball fulfilling the dream of the only lady in his life, that is, his grandmother. He was given the nomination of the best defensive big men in the country. Later in May 2019, he was named as the head coach of the Michigan Wolverines men’s basketball team, with which he made a five-year contract for heading the coaching career. In November 2021, Howard was signed by Michigan to have a five-year contract and an extension through the 2025-26 season.

He is the father of a total of six children and was connected personally with four different women at different times. One of Howard’s children is his son named Juwan Howard Jr., who was born on 5th February 1992, and whom he shares with Markita Blyden. On 6th July 20002, Howard married Jenine Wardally and they together gave birth to two sons named Jace (in late September 2001) and Jett (who was two years younger).

With his achievements and hard work, Juwan Howard became the first NBA player to sign a $100 million contract with any company. By now, Juwan makes a net worth of around $80 million. He is currently serving as the coach of the Michigan Wolverines men’s team. Between 1996 and 2006, he came into the limelight when he started earning a salary of around $15 million per year.