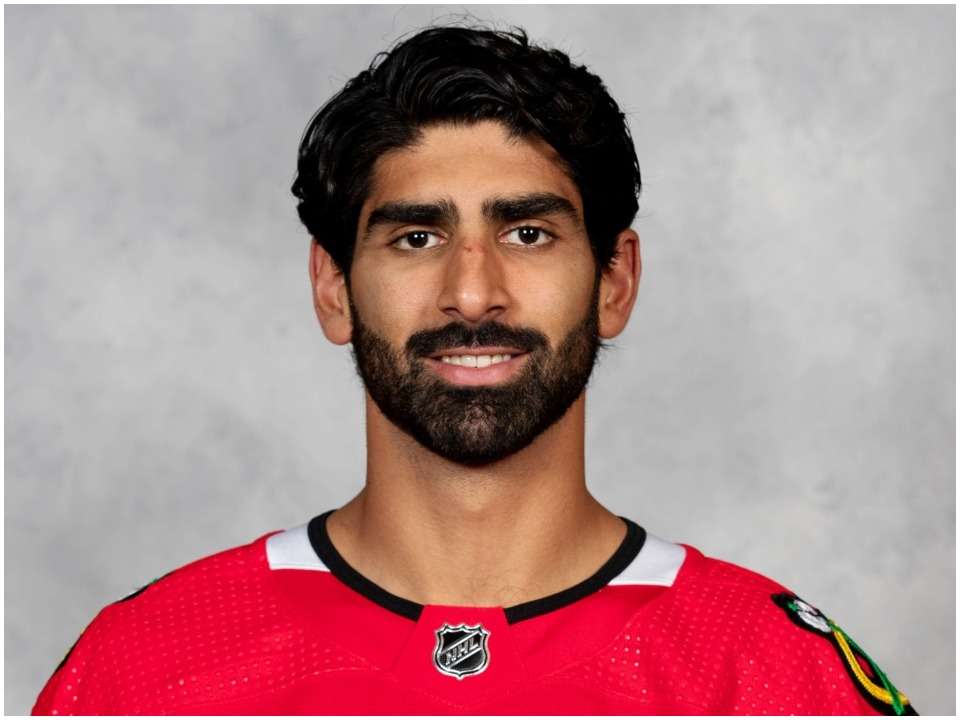 Jujhar Khaira is a Canadian Ice hockey player currently playing at the center position for Chicago Blackhawks at the National Hockey League. he is one of the few Punjabi descent hockey players in the NHL and is famously known for his skill and gameplay.

Jujhar Khaira was born on 13th August 1994 in Surrey, British Columbia, Canada in a family of athletes. Both his parents Sukhjinder Khaira and Komal Khaira were volleyball players in the city and his brother Sahvan is also an ice hockey player who played for the Calgary Dinos team in 2019-20 and attends the University of Calgary. Jujhar grew up with his family in British Columbia and is known to be of Indian (Punjabi) descent. Jujhar is believed to have completed his high school education from a local school in British Columbia where he grew up but the exact name of his institute is unavailable. He is also known to have attended Michigan tech for his college education and to continue his collegiate hockey career.

Jujhar started his career in 2012 when he was drafted by the Edmonton Oilers team in the British Columbia Hockey league. later, he also played collegiate hockey for his college. However, he only played one season with the team after which he went on ahead with his junior league career. He started his junior league career with Everett Silvertips and later joined the Edmonton Oilers team in 2013. Khaira made his debut in the 2013-14 seasons with the affiliate team Oklahoma City Barons and played his first season with impressive records. He later played for another affiliated team Bakersfield Condors and during the 2015-16 season, he played his first-ever national hockey league game against the Pittsburgh Penguins.

Jujhar Khaira ended the season with a total of 15 games and in the following season, he played against Arizona Coyotes and Montreal Canadians against which he scored multiple goals. Recently, in the 2020 season, he was signed as a free agent for two years with the Chicago Blackhawks team.  In the more recent game against the Rangers, Jujhar suffered an injury after he collided with the defenseman of the opposite team, Jacob Trouba. Trouba is said to have rammed his shoulder into Jujhar’s chin due to which he fell. He was taken to Northwestern Hospital for examination and was found responsive.

Jujhar has not shared much about his personal life and hasn’t been known to be in any sort of romantic relationship with anyone. Even currently, he is believed to b single. Other than this, he is known to be a dog person. Jujhar currently has 19.2k followers on his Instagram account where he likes to share pictures with friends, family, and friends and also likes to share about his career. He is also highly vocal about his opinions over social media and recently shared his views about the Farmer’s protest in India.  On his Twitter account, he currently has 7652 followers.

Jujhar Khaira has been part of several junior league games as well as in the National hockey league and has earned a lot of income through his career as a professional hockey player over the years. His exact income however cannot be assessed but his net worth as of 2021 is estimated to be around $3.5million.