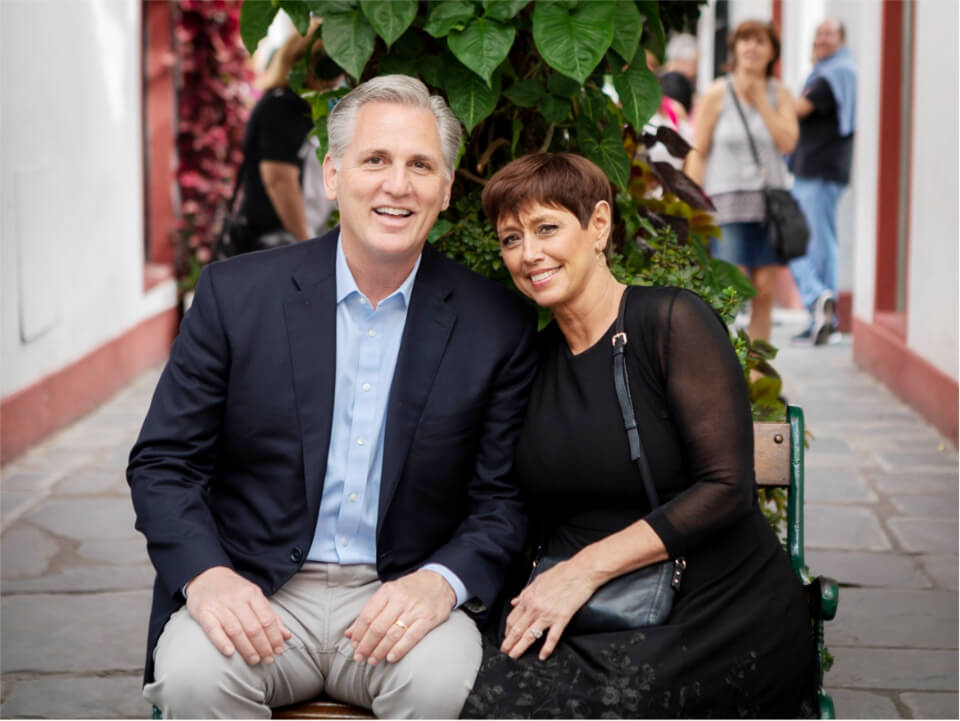 Judy Wages, known as Mrs. Judy McCarthy, is the wife of the famous America-based politician, Kevin McCarthy. She is always spotted with her husband at major political events. Her Husband, Kevin McCarthy, served as House minority leader in the United State House of Representatives from 2019 to 2023.

Recently on 7th January 2023, her husband was honored and was made to hold the position of “the 55th speaker of the U.S. House of Representatives”. This created a buzz in the town to know more about Kevin’s family members, including his wife, Judy. Also, Judy is often seen supporting Kevin in front of the media and at various events.

Judy Wages was born on 6th December 1964. As of January 2023, she is 58 years old. Her parents’ names were Sharon and Harvey Wages. She has four siblings and was raised in the town of Bakersfield, California. She grew up in a close-knit community that fostered her fundamental values in life from an early age; faith, family, and friends. Her brother’s name is Harvey Wages and Willian Wages. Willian was in the spotlight for allegedly lying about ancestry in 2018. He was involved in some legal matters because of the ancestry properties. This also affected the relationship and marriage life of Judy Wages.

Judy started her profession and is always looking for a way to support her family. After marrying Kevin McCarthy, she served for the California Republic Party. In 2014, she served as a trustee at Ford’s Theatre. During that time, she had a true passion for celebrating the site of President Abraham Lincoln’s assassination in 2014. While working, she has also worked full-time for the California Republican Party. She also raised hundreds of thousands in fundraiser money for shaping the nation’s fight for freedom.

Judy Wages is a happily living married woman. She has been the wife of Kevin McCarthy since August 1992. She met her husband in biology class at Bakersfield High School. Both fell in love from a young age, according to various sources. Her husband, Kevin, serves California’s 23rd U.S. House of Representatives district.

In 2015, her husband, Kevin McCarthy, was accused of having an affair with Representative Renee Ellmers. That incident didn’t affect Judy and Kevin’s relationship, either. She always supported and stood with her husband. However, Kevin and Renee Ellmers denied the allegation. Judy is simple, not showy, and has a caring personality. She is the mother of two children named Connor (Son born on 3rd April 1994) and Meghan (Daughter born on 2nd August 1996)- sharing with Kevin.

Kevin and Judy maintain a flexible schedule for raising the children and looking after their upbringing, career, and education. Her son, Connor, graduated from Georgetown University and tied the knot with his wife, Emily Norris, in December 2020. Her daughter, Meghan, was diagnosed with Lyme Disease.

Judy Wages McCarthy is recognized as the wife of Kevin McCarthy. It is safe to say that Judy and her husband, the famous politician, are earning well. Their estimated networth can be assumed somewhere around $5 Million.