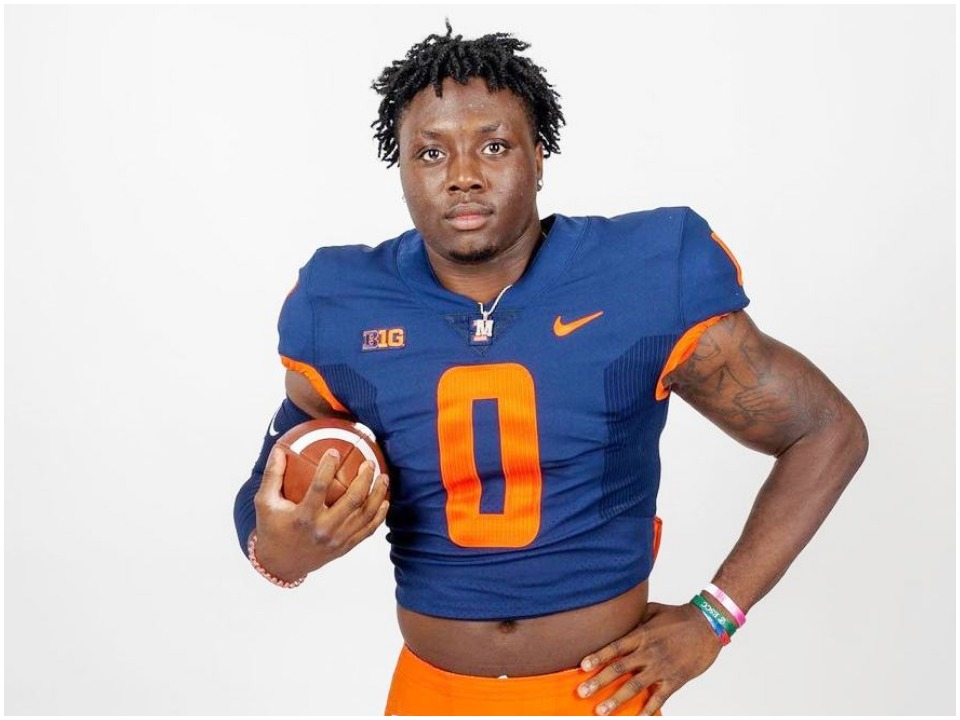 Josh McCray is an American Football player currently playing for the University of Illinois Football team as the Running back. He was one of the most popular and highly rated three-star recruits after high school and has maintained an excellent career record to date.

Josh McCray was born on 24th February 2002 and is the son of Chris Ann. He has not shared much about his mother and other family members. He belongs to an African-American family and grew up in Alabama. Josh completed his high school education at Enterprise High school. He then joined the University of Illinois in 2021 to further his football career and is currently in the freshman year of college pursuing a bachelor’s degree in General studies.

Josh started his career during high school where he played football for the school team. He started playing as the running back for the team and also played as the linebacker and wide receiver. In his junior year, he completed 604 yards and also helped the team to reach Alabama into 7A state playoffs 2020. In his senior year, he completed 774 yards and 11 touchdowns and maintained an average of 7.0 yards per carry. He finished his high school career in 2020 and was ranked as a three-star recruit by all major ranking and sports agencies like Rivals, ESPN, and 247 sports.

He was also invited to the Under Amor All-American Camp series and ESPN 300 Elite underclassmen camp. In 2021, he joined the University of Illinois as a running back and started playing for the team in the 2021 season. He made his debut against the UTSA team in 2021 and finished 18 yards with 5 carries. He also made a career-high record of 167 yards with 24 attempts in a game against the Purdue team. His performance with the team has been excellent so far and he also became the team’s MVP in the game against Nebraska.

Josh has not disclosed anything about his personal life as of yet and is not known to have had any romantic relationships. He likes to keep his personal life out of the limelight and is currently believed to be single. He is highly focused on his career as of now. Josh currently has 1605 followers on his Twitter account which he joined in 2018. He is also known to have an Instagram account where he currently has 2620 followers and only posts about his career and games.

Josh McCray is currently a collegiate level sportsperson and thus he does not earn regular income however, he earns a lot of income through winning matches and rewards through football. His net worth as of 2021 is unknown but his family’s net worth is estimated to be around $800,000.