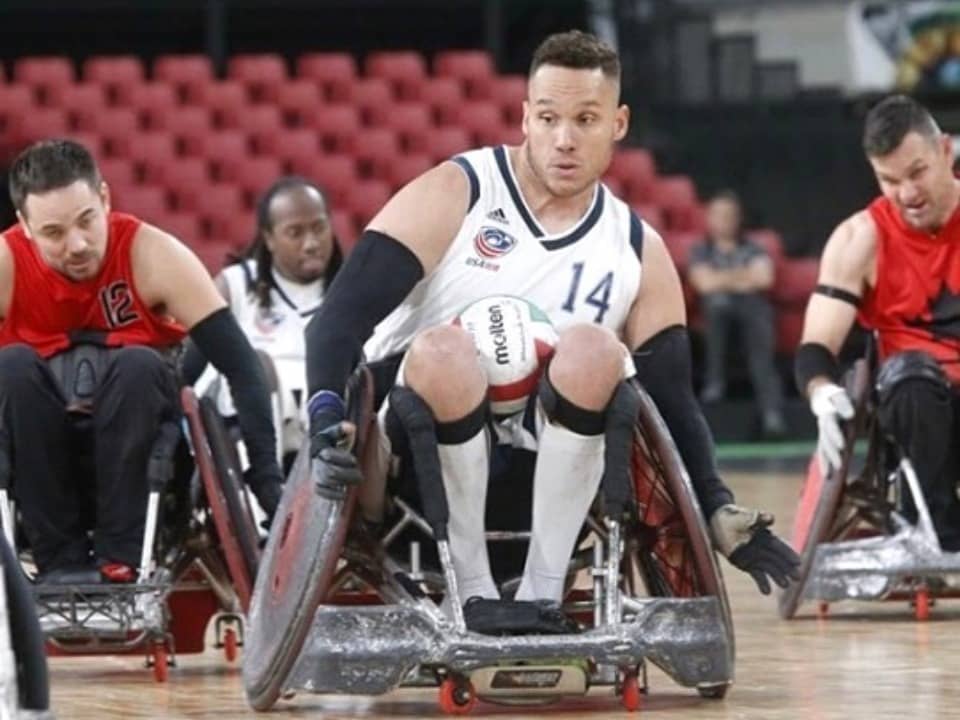 Joe Delagrave is a wheelchair rugby player. He was in his 12th year when he started playing for US Wheelchair Rugby National Team. One of his major life events brought a huge change in his life when he conquered the obstacles after sustaining a life-altering spinal cord injury. He loves to spread his life story and has attained a great life journey from being a college player to wheelchair elite athlete.

Joe was born on 21st March 1985 in Racine, Wisconsin and his parents are Daniel and Debra Delagrave. He spent most of his childhood and cherished those memories with his one brother Lander and three sisters, Gina, Electra and Caprice. For his education part, he went to Prairie du Chien High School and went to higher studies at Winona State University followed by the University of Northwestern and Grand Canyon University.

Before Delagrave’s rugby playing days, he was heavily involved in playing active games like basketball and football. At the age of 18 years old in 2004, he met his life-changing event that took away all of his dreams and made her personal life in a whole new different direction. He was normally enjoying his day on the river with friends when suddenly the boat flew backward and hit his head. He fell off the boat and broke his neck. This incident left him paralyzed from the chest down. Joe had been playing sports his whole life and was determined to find a way to live an active life despite being paralyzed.

His search finally ended in 2006 when he got to know about rugby and this made him return to the field again. Strength, inner drive, and determination taught Joe to open his career again as a Paralympian. He delivered a bronze medal while performing for London 2012. Joe is expected to make his comeback with and dream come true with Tokyo 2020. He has learned to overcome the ups and downs of his career as a wheelchair rugby player and still maintained a top position in the list of Paralympics. In the year when COVID-19 elevated, there was one thing that made the spirit of the fearless man and that was to keep basics and improving the game with time.

Joe intended to take the year as a chance to improve himself and take the year as a bonus to get better. He worked on his weaknesses and put on his strength to get ready for Tokyo 2020. Joe made himself a little stronger and faster than before. He took up the good spirit to complete his job so that he could roll around Tokyo Paralympics 2020. Joe attended few training camps before heading towards Tokyo 2020. His chances were relatively high to get selected for the same. He was currently serving as the co-captain for the team who not only had the hard-won experience in Paralympic Games but also directed the team to win Parapan American Games with a gold medal in 2019. Delagrave believes that the current team would surely build its foundation in Tokyo 2020 that would be special.

Joe Delagrave has spent almost 12 years while being wheelchair rugby for the USA team. He is currently 35 years old and has experienced triumphs and disappointments on rugby courts. Joe is hoping for the best things to happen like before in the 13th year also. He is going to participate with his team in Tokyo Olympics 2020. Delagrave has his home in Wisconsin where he was brought up and he is currently residing in the same city with his wife and three children (two sons and one daughter). In addition to being a husband, father of three kids, and a rugby player, he is also a motivational speaker.

After meeting the life-changing incident of his life, what encouraged him to be active and functioning was the Bible verse that was written on his shirt that he used to wear. It says that if you trust in Lord from all your heart and lean on your understandings; you can easily acknowledge or direct your path. That verse changed his life as he felt invincible about being at the age of 19 and tried a lot to put his efforts again.