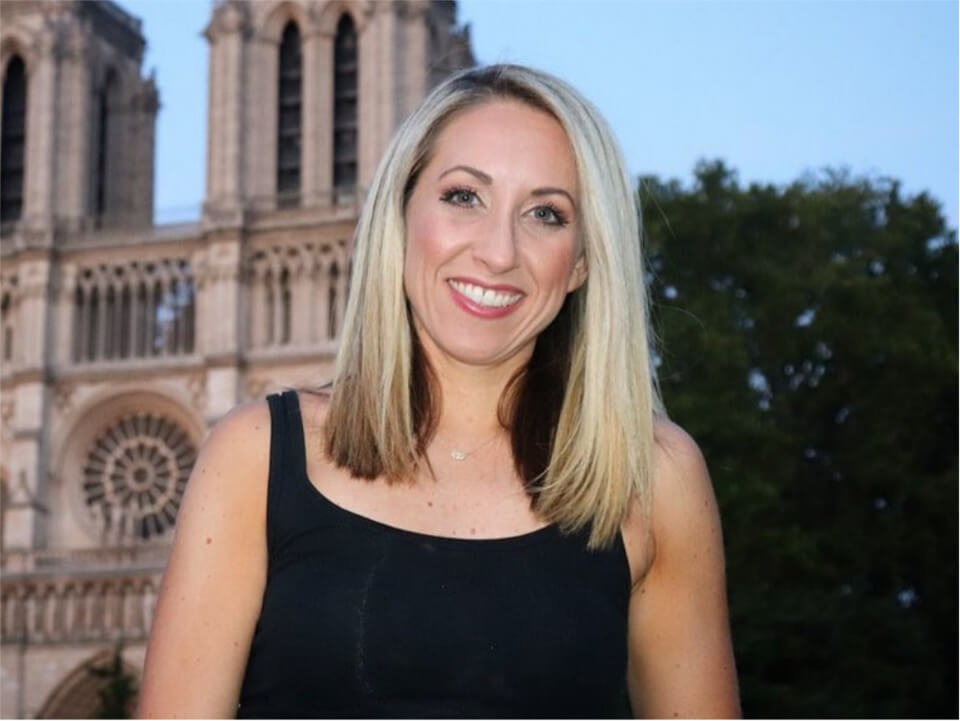 Jenna Laine is recognized as an NFL Nation team reporter at ESPN. She is responsible for providing daily news reports, including insight and analysis about the Tampa Bay Buccaneers. Furthermore, she appeared on ESPN Radio and television programs. She won the title of 2008 Southeastern USA fitness and also appeared at the NPC Europa Show of Champions, where she finished while being runner-up.

Jenna Laine was born on 5th June 1984. As of January 2023, she is 38 years old. She was raised in St. Petersburg, Florida, USA.where she completed her schooling with good grades. In 2003, she enrolled at the University of South Florida, where she served as a Correspondent for the school newspaper. She worked for USF St. Petersburg’s “Scoop” Magazine and was mentioned in USF St. Petersburg’s Regional Chancellor’s List (Dean’s List). In 2007 she earned her degree in Mass Communication and Broadcast journalism. Talking about her family, she has not shared any information in public.

Jenna started her professional career path as a sports journalist. From Sep – Feb 2008, she served as Freelance Videographer for United Soccer League’s Soccer Fest. In Jan 2009, she served as Writer for NFL.com Blog Blitz, powered by Sports Fan Live. There, she covers Tampa Bay Buccaneers, providing game coverage reports and analysis, conducting player interviews, and much more. Later, she left it, and in Nov – Dec. 2010, she covered all Bowl Week events from 18th December to 22nd December and Gameday for the Official Beef ‘O’ Brady’s Bowl. She also provided social media updates throughout Bowl Week.

From Jan – March 2011, she served as a Field Reporter. She conducted on-camera interviews for the Lingerie Football League (LFL) Tampa Breeze and Philadelphia Passion for MTV 2’s Friday Night Football, broadcast in 45 countries worldwide. In May 2011, she joined CBS Sports Radio at 1010 AM. There, she co-hosted and produced “The Sports Mob,” a sports talk-radio show airing Monday – Friday, 6–8 pm. Later, she left it in May 2012. In August 2014, she served as a correspondent for FOX Sports 1, regularly appearing on FOX Sports Live and America’s program show throughout the 2014 season.

Afterward, she joined Genesis Communications (Radio, Digital Web Publication, and Video Production Company) in Tampa, Florida. Initially, she served as Radio Host, Your Wake-Up Call on AM 820 News (Tampa Bay) and AM 1190 News (Orlando). Later, she served as the Afternoon drive host of Sports Talk Live on Sports Talk 1040 The Team, airing Mon-Fri 3–6 pm throughout the Tampa Bay area.

Later, she left it in April 2016. From Sep 2018 – Aug 2021, she was one of three panelists on “The Insiders”, Tampa Bay Buccaneers’ program show on Tampa’s ESPN Radio affiliate, 620 WDAE/95.3 FM. Airs Sundays from 9–10 am. Jeena achieved a successful and honorable position for her work in the sports journalism field. Currently, she serves at Tampa Bay Buccaneers for ESPN NFL Nation.

Jenna is a member of the Association for Women in Sports Media (AWSM) and the Pro Football Writers of America (PFWA). She also volunteers with several local organizations, including Angels Against Abuse, an advocacy group for foster children in the Tampa Bay area, and the Kind Mouse. Jenna regularly takes part in various quests in Relay for Life and Making Strides Against Breast Cancer events with the American Cancer Society. In addition to this, she also helps a local food pantry which provides assistance to families in transition.

Jenna started her career as an intern for USF’s Multimedia Journalism Program in partnership with WFLA News Channel 8 and TBO.com. She served there from January – May 2006. Later, she was picked by USF’s School of Mass Communications faculty to participate in a full-time, paid internship at WFTS Channel 28. She served as the Scripps Howard Foundation intern from May-Sep 2006.

During that time, she learned about reporter duties, including shooting, non-linear editing, voiceover work, writing script, on-camera reporting, and anchoring. She is also one of 12 contestants participating in WUSF TV’s Florida Focus news show. In August 2007, she worked at Pewter Report Magazine & Pewter Report.com. There, she produced all video elements and contributed print stories. Later, In May 2008 left it.

Jenna Laine is still single. As of January 2023, Jeena does not reveal any details related to her relationship or marital status.

Jenna Laine is ESPN and social media personality. She worked as a sports journalist and earned success, a fan following, and a fortune career. Jeena’s estimated net worth is around $4 Million.