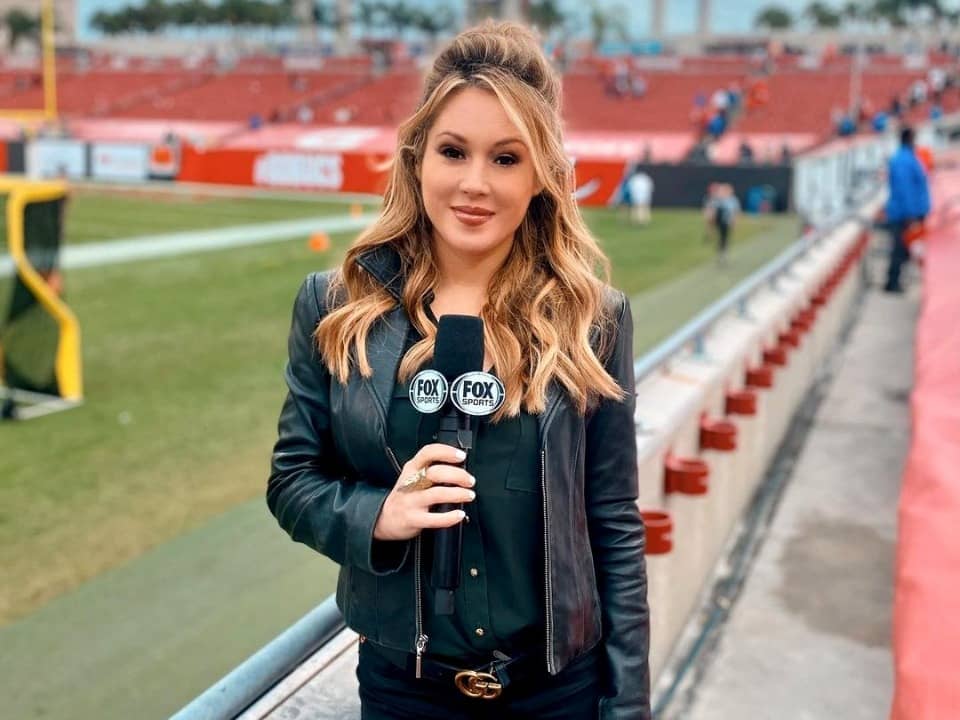 Jen Hale is an accomplished American sports journalist, author, and TV host. She is an ambitious woman who works as an NFL sideline reporter for Fox Sports. Jen has hosted Fox Sports 1 shows Skip and Shannon: Undisputed and Lock It In as a substitute. She covers shows like The Basketball Tournament for ESPN, Westminster Kennel Club Dog Show, NBA’s New Orleans Pelicans for Bally Sports New Orleans, and College Football for Fox Sports.

Jen Hale was born in the southeastern state of Louisiana called New Orleans on 28th February 1978. She grew up in Alabama and loved sports since she got into school. Jen wanted to become an Attorney and has full knowledge of political science. She developed her interest in broadcasting when she appeared as a political analyst for a student-run television program at her college. She was a ‘competitive gymnast’, cheerleading, homecoming queen, and Miss LSU during her college days. There’s not much known about her parents but her father died few weeks after she completed high school. Jen studied at Apple Valley High School of Alabama and later completed her bachelor’s degree from Louisiana State University as well master’s degree from Northwestern University’s Medill School of Journalism. She has also studied the US-German relationship after the fall of Communism from Germany.

Jen Hale started getting experience of news and TV when she was in college. She started to work as an intern for CNN in their Washington D.C. bureau. Jen got into her professional career by covering politics for KNOE-TV, which sent her to Baton Rouge as their capital correspondent. She became a weekend anchor and reporter for WVTM in Birmingham, Alabama. Jen interviewed former athletes and special guests at LSU football games to put on their website. After admiring her work with New Orleans Saints, the Saints organization recommended her to Fox Sports.

In 2009, Jen wrote a book called Historic Plantations of Alabama’s Black Belt in which she explores the history of seventeen of the finest plantation homes in Alabama’s Black Belt. Jen served as a Sideline Reporter for TNT’s coverage of the 1st round of the 2017 NBA Playoffs. In 2020, she covered The Basketball Tournament in Columbus, Ohio for ESPN, she was the only reporter there due to COVID-19.

Jen is currently focusing on her career and is single. She is not dating anyone right now and there is no evidence of her past relationship with anyone found on the net. Jen aside from being a reporter is also a social media influencer. She has a huge fan base on Instagram. She has a verified account on Instagram under the username @jenhale and 44.7 k people follow her. Jen is also active on Twitter under the username @JenHale504 with a following of 46.9 k people. She also has a page on Facebook followed by 29k people.

Jen Hale is a self-built and talented sideline reporter, she has come a long way in her career and had earned a decent amount of money. Her net worth as of now is around $500,000 USD. She has recently bought a 500 square foot condo in French Quarter, New Orleans.