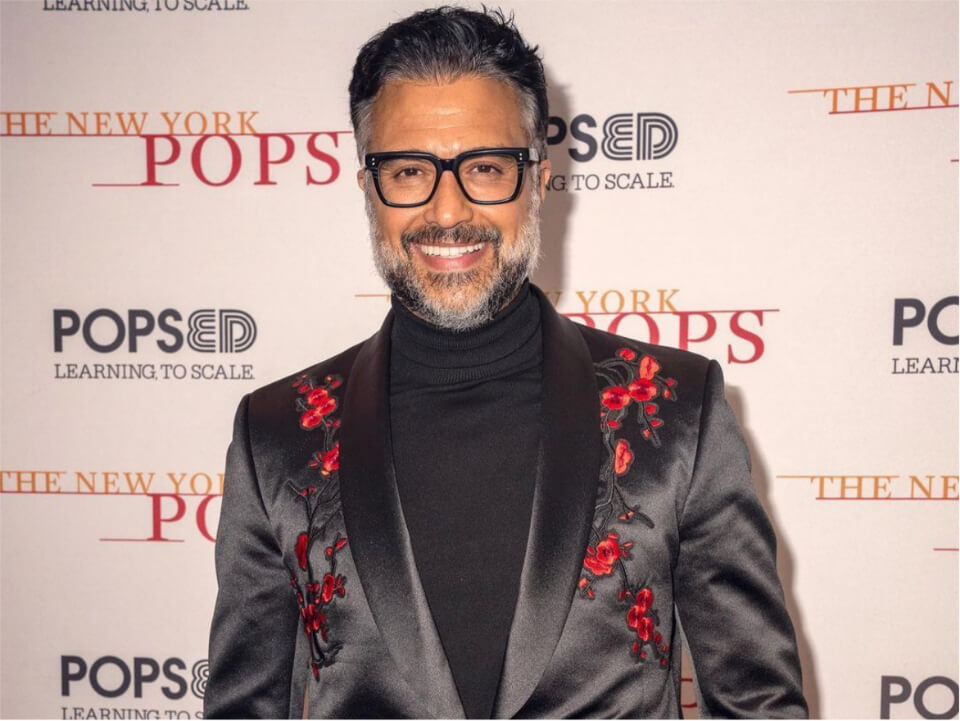 Jaime Camil, in full, Jaime Federico Said Camil de Saldanha da Gama is Mexico-born American personality who is a singer, actor, host, musician, TV personality, and singer. He is best known for his roles in the television shows like La Fea Más Bella and Jane the Virgin, which later brought the nominations for Critics’ Choice Television Awards in the category of a best-supporting actor in a comedy series.

Jaime Camil was born on 22 July 1973 in Mexico City, Mexico. His father’s name is Jaime Camil Garza, who is a businessman and his mother’s name is Cecilia Saldanha da Gama, who is a Brazilian singer. Jaime received his bachelor’s degree in business administration from Universidad Anáhuac. He also studied acting in New York, Los Angeles, and Mexico and later had his training in opera in Italy. Camil is the brother of two half-siblings and three step-siblings. He has an older half-sister named Issabela Camil, who is an actress as well as a model and pursuing her extensive career in Latin countries of America including Mexico.

Camil started his career in 1993 and began working as a radio commentator on Radioactive 98.5. He had changed in many of his professions beginning in 1993.

He made his debut on the small screen while hosting the show El show de Jaime Camil. Later, he also worked as the host of TV Azteca’s Qué nochecita con Jaime Camil (1996) and Televisa’s Operación triunfo (2002). He worked as the co-host and host for the programs like Aventura por México with Javier Poza, and the Mexican edition of the game show, El Gran Show in 2009 and 2010 respectively.

Music Albums and travel to the countries

In 1999, Camil released his first album “Para estar contigo”, which made him travel to different cities in Mexico, South America, and the United States. He participated in El Ultimo Adios (The Last Goodbye), a program that gave tribute to the victims of 9/11. Thereafter, he released his second disc named Una vez más in 2002 and other single albums like Dime and Muriendo por ti (together the singles rose to fame and attained billboard numbers as #17 and #24).

Camil began working in television in 2000 when he first worked for Mi destino eres tú (2000), and later he worked for another show named Mujer de madera (2004). This particular film in 2004 eventually brought Jaime Camil to universal attention and he became a romantic comedy telenovela La fea más bella (2006–2007). His interpretation of Don Fernando Mendiola made him earn nominations for the best actor role in the Premios TVyNovelas. He also worked for another telenovela named “Las tontas no van al cielo” (2009), where he worked with Jacqueline Bracamontes. His next telenovela was named Los Exitosos Pérez (2009–2010) in which he played twins and which was, in reality, an Argentinian and Mexican co-production and took him to South America.

Jaime is a happily married man with his small extended family splitting the time between Los Angeles and Mexico City. His wife’s name is Heidi Balvanera worked as a model. Both the partners have raised two children after their marriage and their names are Jaime (III) and Elena Camil.

Jaime Camil is a well-established singer, album owner, host, musician, TV personality, actor, and a great husband and proud father of two children. He is of Mexican and Brazilian descent and possesses a net worth of around $ 15 million, as per Celebrity Net Worth.