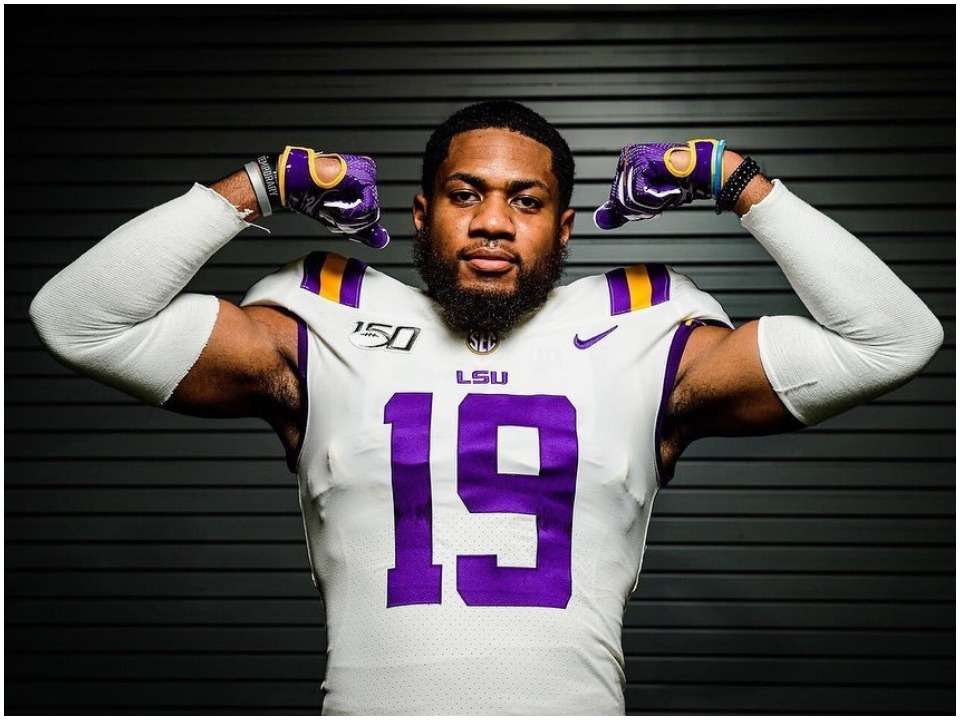 Jabril Cox is an American Football player for NFL team name Dallas Cowboys. His position is as a Linebacker. Along with that, he has played college football for North Dakota State University and Louisiana State University. He has also won three times FCS Championship in 2017, 2018, and 2019 and twice FCS All American.

Jabril Cox was born on 16th April 1998 in Kansas City, Missouri, United States of America. The names of his parents are Lotu Cox and James Cox. He has six siblings where one of the younger brother is named Jasir Cox. At a young age, he was very active in playing sports with his siblings.

Jabril went to Raytown South High School and completed his high school education. Later he went to North Dakota State University. Along with his studies, he also managed to play football for the school and college team. He took a transfer to Louisiana State University for better opportunities as a player.

He started his college career and was redshirted in his freshman season until he was converted into a linebacker. His appearance was seen in 15 games with 8 starts, registering 75 tackles, 13 tackles led to a loss, 4.5 sacks, 6 quarterback hurries, 3 pass breakups, and 3 fumble recoveries. He was seen playing against Youngstown State University, Sam Houston State University, and many other games where he was named as a second team All MVFC and the conference Newcomer of the year.

As a sophomore, he had a score of 15 starts, 91 total tackles, 9.5 tackles for loss, 4 sacks, 7 quarterback hurries, and 4 interceptions two of which he returned for touchdowns. Due to amazing performance, he was named as the Defensive Player of the year and first team All MVFC.

As a Junior, he played against University of South Dakota, Illinois State University, James Madison University, FCS Championship, and many more teams. He started 15 games and made 92 tackles, 57 Solo tackles, 9.5 tackles for loss, 5.5 sacks, 5 quarterback hurries, 1 interception, and 6 pass breakups.  Along with that he also contributed to winning 3 FCS Championship. His career was finished with Bisons, with 38 starts in 45 games, 258 tackles, 14 sacks, 6 interceptions, and scored two defensive touchdowns.

In 2020 he was transferred to Louisiana State University where was seen playing against Mississippi State University, University of Alabama, and at CFP Championship. He collected 58 tackles, 6.5 tackles for loss, 1 sack. 1 fumble recovery, 8 pass breakups, and 3 interceptions. The same season he announced to enter 2021 NFL Draft.

On 20th May 2021 he signed a rookie contract and was selected by Dallas Cowboys in the 4th round and 115th overall of the 2021 NFL Draft. Dallas has removed their player named LB Jaylon Smith and selected him.

Jabril is currently single. The details about his current or previous relationships are not under limelight yet. He enjoys spending most of his time with his parents and along will that also likes to bring them to watch the match.  Moreover, he spends most of time preparing for the upcoming matches and with friends as well.

Jabril Cox has earned a lot from his career by playing football professionally. His salary is estimated around $660,000 with a signing bonus of $192,813. According to sources his net worth has been estimated around $4,251,252. He also earns by attending various events and brand endorsements.