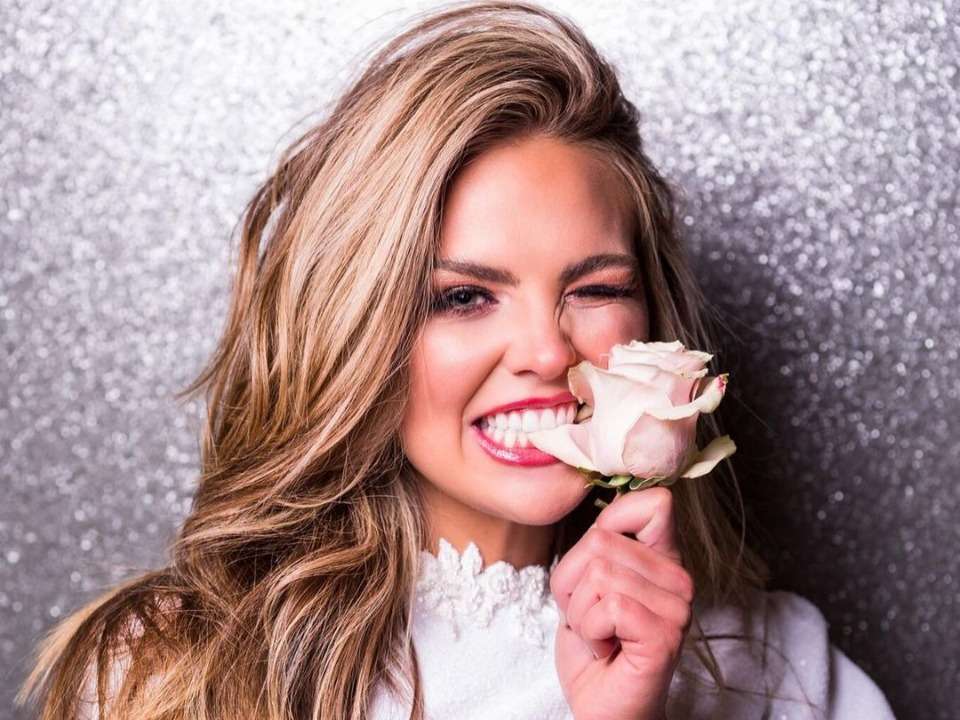 The beautiful and gorgeous Hannah Brown is an American Television Personality and a former beauty pageant titleholder. Hannah rose to fame after she played the lead role in the season of “The Bachelorette.” Hannah Brown won the crown of Miss Alabama USA 2018 and competed in Miss USA 2018. She also won season 28 of Dancing with the Stars on November 25, 2019, where she participated with Alan Bersten.

Hannah Kelsey Brown, popularly known as Hannah Brown was born on September 24, 1994, in Tuscaloosa in Alabama, United States of America. She is the daughter of her father, Robert Walker-Brown, and her mother, Susanne Brown who raised her in Tuscaloosa and in nearby Northport, Alabama, and she doesn’t have any siblings. Brown studied at Tuscaloosa Country High School, and later in 2017, she graduated from the University of Alabama from where she received a degree magna cum laude from the University’s College of Communication and Information Sciences. She was a member of the Alpha Upsilon Chapter of the Alpha Chi Omega sorority when she was in college. Hannah worked as an interior designer in Northport.

Brown began her pageantry career when she was 15 years old. She started competing in local Alabama teen pageants. As a teenager, she won the position of the first runner up in Miss Alabama’s Outstanding Teen 2010 and second runner up in Miss Alabama Teen USA 2011. In Miss Alabama 2013 Brown competed, representing Tuscaloosa, but did not win the competition. She again tried in 2017 but did not succeed. She returned the following year, where she represented West Alabama and was crowned as Miss Alabama USA 2018. As she won this title, she was given a chance to represent Alabama at the Miss USA 2018 competition which was held in Shreveport, Louisiana.

During that time, she was a roommate with the Miss North Carolina 2018 Caelynn Miller-Keyes. Hannah chose the platform of mental health and awareness as she had gone through anxiety and depression before for several years. The pageant was then won by Sarah Rose Summers of Nebraska. Hannah gained huge attraction in 2018 where she was cast in the 23rd season of The Bachelor, starring former professional football player Colton Underwood. The host Chris Harrison announced Brown as the lead for the upcoming 15th season of “The Bachelorette.” Brown is the first Bachelorette cast to not have a place in the top four seasons of “The Bachelor.”

In the season finale, she chose Jed Wyatt as her fiancée though they broke up later after filming it, and emerges through people that Wyatt was in another relationship. Hannah is really hardworking and dedicated to her career but currently, she has not mentioned anything about her upcoming projects. Currently, she is focusing on her dating life and it has been announced that she won’t be taking part in the next season of “The Bachelors.”

In May 2016, Brown used a racial slur while singing along to the lyrics of “Rockstar,” a song which is sung by DaBaby on Instagram Live. She was then criticized a lot by the media and other former cast members of The Bachelors. She then issued an apology for her actions on her Instagram which was well received.

The former Bachelorette had two serious relationships before 2019. Hannah dated her high school love named “Brandon Hall” later breaking up with him. Later, she dated Austin Williams for roughly one year when she was studying in the college. In July 2019, she asked up Tyler Cameron on a date for which he agreed but shortly after that, the couple broke up and that she is single. She has also dated other men like Colton Underwood, Peter Weber, Jed Wyatt and had a rumor about dating Adam Woolard. She then revealed in February 2021 that she and Adam Woolard are dating.

Hannah Brown, who is a model, Reality Star, and an Interior Designer as well, earns an estimated net worth of $200 thousand USD which she earns through her hard work and her passion for her work.