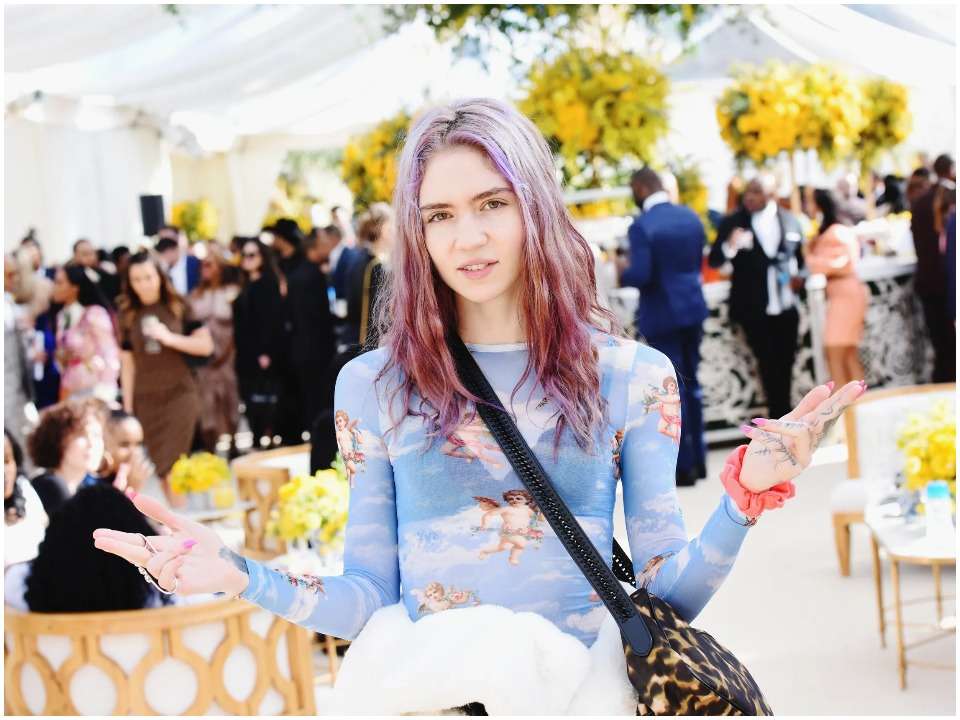 Grimes Musk is a popular Canadian singer, songwriter, musician, and song record producer. Grimes is her professionally known stage name, her real name is Claire Elise Boucher. She was born in Vancouver. Her music is largely incorporated with elements of hip hop, electronic, dream pop, and R&B, with the essence of feminism and sci-fi themes. In her career as a musician, she has written five studio albums: Geidi Primes, Halfaxa, Visions, Art Angles, and Miss Anthropocene. She is most popularly known for her acclaimed singles like Pretty Dark released in 2019 and We Appreciate Power released in 2018.  Over the years the talented singer has won many accolades and awards like the video of the year in 2017 for her music video of Kill V. Maim and Electronic album the year in 2013 for her third album Visions.

Grimes Musk was born on 17th March 1988 and raised in Vancouver, British Columbia, Canada. Belonging to a French Canadian, Italian, Métis, Ukrainian background, she grew up to be a Roman Catholic and she was enrolled in a Catholic school. Her mother’s name is Sandy Garossino. She is an arts advocate and crown prosecutor. Grimes’s father was a former banker who currently works in the business side of biotech. She grew up with two siblings, all boys named Mac Boucher, and Daniel Boucher.

She also has a stepbrother named Jay Worthy, with whom she frequently collaborates. All of her siblings are working in the show business. Grimes went to Lord Byng Secondary School and graduated in 2006. She then relocated to Montreal from Vancouver to attend McGill University where her major was neuroscience and Russian language. She later left the school in 2011 before she could complete her degree.

The singer first started releasing her solo music in the late 2000s. In 2007, she started writing songs under her pen name Grimes. She released two albums Geidi Primes and later Halfaxa on Arbutus Records in 2010. She signed with the 4AD label at the same time. Her third album Visions released in 2012 which led her to fame. With singles on the album like Genesis and oblivion, she became highly popular and received the Juno Award of the Canadian music industry for electronic album of the year.

Her fourth album was called Art Angles that was released in 2015. It also received high praise from critics and publications naming it as the best album of the year. In 2020 she released her fifth album, Miss Anthropocene.

Between 2007 and 2010, Grimes Musk was in a relationship with Devon Welsh. He was the lead singer of Majical Cloudz. They met at a college’s first-year dorm party at McGill University. Between 2012 and 2018, Grimes dated another musician Jaime Brooks. He was in the electronic genre and often supported her on her visions tour, participating as Elite Gymnastics. Since 2018, she began to date the famous entrepreneur Elon Musk. They met on Twitter. On the 4th of May, 2020 Grimes gave birth to their first child, a son named X Æ A-12. Their son was born in California where his name violated the naming law of the state so they changed it to X Æ A-Xii. X is his first name.

He was Elon’s 7th child and Grimes’s first. In September of 2021, the couple got separated for a brief period. In December they welcomed their second child, Y through surrogacy. Recently the news broke that Grimes Musk and her partner Elon Musk had their second child in December of 2021, secretly from the public media. They had a beautiful baby girl whom they named Exa Dark Sideræl. They fondly call her Y matching with her older brother whom they call X. Y was born via surrogacy, just after a couple of months when the couple reunited after being separated for a while.

She is probably enjoying her career as a singer which is her main source of income probably. Apart from this, her name is linked with the Richest person on the Earth Elon Musk, so it is obvious that she must be earning millions from it. In addition to this, she should be doing music concerts and tours so her estimated net worth is around $3 million.