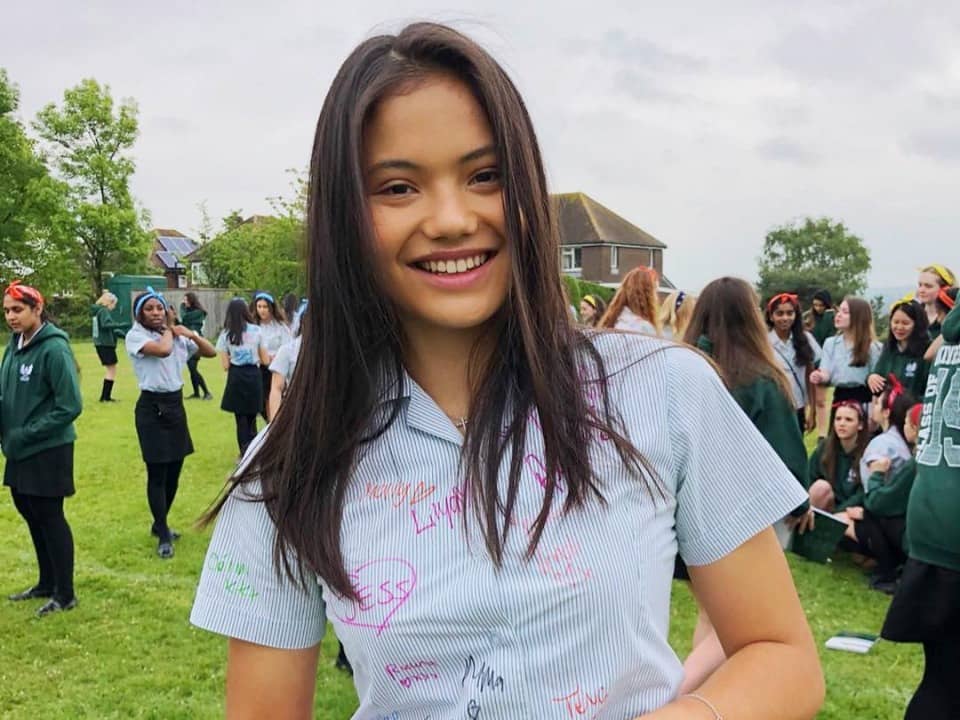 Emma Raducanu or popularly known by the name Emma is an 18-year-old British tennis player. She initiated her career at an early age of just 5 which turns her none less than a prodigy. Emma achieved great heights at a very young age and participated in various tennis tournaments which do include some prominent ones like Women Tennis Association Tour, Wimbledon, Grand Slam, and many more. She had been ranked 333 worldwide by the WTA in the singles category in March 2020. Emma stunned the whole world with her amazing aggressive game in the US Open 2021 where she reached the final for the first time. She is all set to showcase her talent on the court and aims to win Wimbledon 2022.

Emma Raducanu was born in Toronto, Canada on 13th November 2002. However, later on, her whole family moved to the U.K, London when she was 2 years old and she further grew up there. She was born to Mr. Ian, who is of Romanian origin, and Renee, who is of Chinese descent. Emma has a brother as a sibling, however, there aren’t any appearances of him on socials.

Besides playing tennis, she loves to write, draw, read and play football. Being an 18-year-old girl, she just finished school at Newstead Wood School in London and she credits her 7 years there for developing her mind and social skills for tennis. She is an A grade certified in Maths and Economics. Moreover, she gives as well as hope for the best things on as well as off the field. Her parents expect none less than an A grade in her academics, for the rest of which she has to work hard and focus on her academic coursework.

She started playing tennis when she was just 5 years old when she joined Bromley Tennis Academy. She is a right-handed player and attained 338 ranked as of 28th June 2021, although her career-high ranking is 333 which she got in march 9,2020. Emma is the youngest British woman to reach Wimbledon 4th round. In June, Raducanu made her main draw grand slam debut on a wildcard to the 2021 Wimbledon championship. She advanced to the fourth round with initial victories over Vitalia Diatchenko and Marketa Vondrousova. She was the youngest British woman to reach the Wimbledon third round since Elena Baltacha in 2002, also as an 18-year-old.

Emma defeated Sorana Cirstea to reach the fourth round, becoming, at 18 years and 239 days old, the youngest British woman to reach the last 16 in the Open Era, and guaranteeing herself a place in the top 200 in the WTA rankings, a more than 150 place improvement from her ranking at the commencement of the tournament of World No 338. Moreover, Raducanu is currently coached by Nigel Sears, who formerly coached Amanda Coetzer, Daniela Hantuchova, Ana Ivanovic, and, most recently, Anett Kontaveit. Sears has worked with Raducanu at varying points in her career, starting when she was 15. Emma became a teen sensation as she continued her amazing form in Wimbledon 2021.

It was quite impressive that she reached Round of 16 despite being 15 years old. Emma lost to Ajla Tomljanovic as a walkover with a score of 4-6 & 0-3. She felt health issues and felt difficulty in breathing so she had to retire but was able to impress with her gameplay. With this feat, she gained a massive fan following and surprised the world with her temperament and class. Apart from this, she also gained a wild card entry to  San Jose which will be held next month in Mubadala Silicon Valley, California. Emma gained global media stardom because she climbed all the way into the finals in the US Open 2021. In the finals, she defeated Leylah and created history for herself by clinching the first-ever grand slam.

It can be clearly observed that she does not maintain enough connections with her fans on social media, moreover, she posts very rarely on Instagram(@emmaraducanu), till date she had posted just 73 photos and videos on her Instagram, furthermore she does not create enough connections with her fans by coming live regularly and she has a total follower count of 121K and most importantly she owns a verified badge over there. however, she does not have a large fan following on Twitter she has a follower count of 25.5K although, she is verified on Twitter as well. (@EmmaRaducanu).

Being an 18-year-old girl, it is obvious that she is not married, however, no such proof relating to relationships and dating could not be found on social media as well as on the world wide web.

Emma Raducanu had earned prize money of approximately $35000, and her estimated Net Worth of $50k-$100k. Her only source of generating income is playing tennis as a professional player.