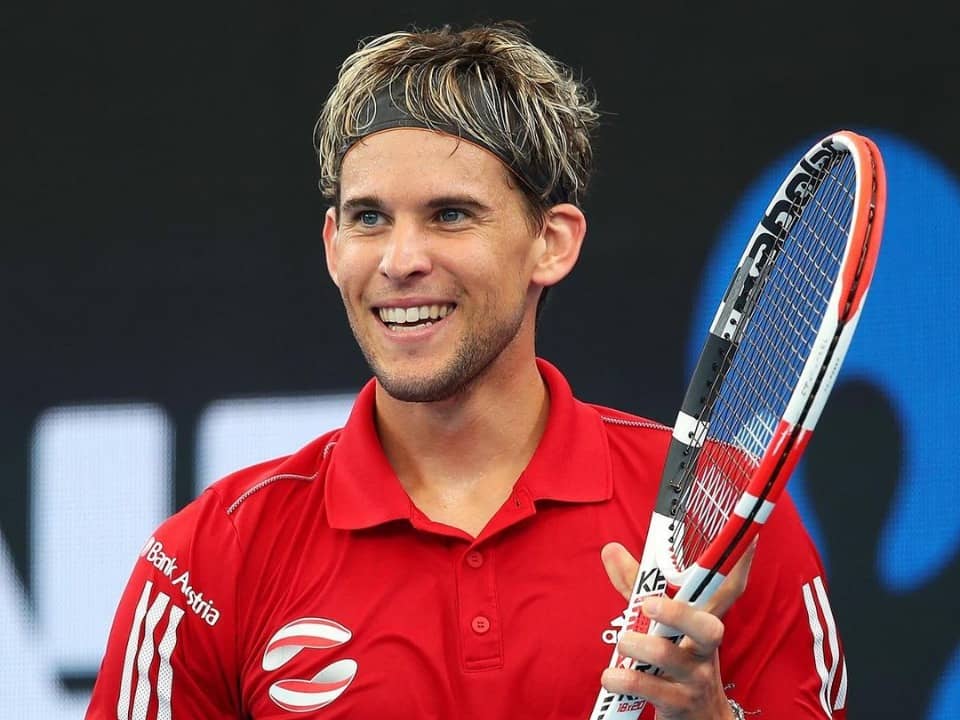 An Austrian native, with highly proficient skills and loaded with talent and opportunities turned out to be an impressive Tennis player. Dominic Thiem entered the ATP circuit at an early age and became a pro tennis player in the year 2011. His powerful groundstrokes and single-handed backhand have earned him a lot of media attention and praise from all quarters. He is often portended to have a glittering career in the future. His fans get baffled while watching him play in the fields.

Dominic Thiem was born on 3rd September 1993 in Wiener Neustadt, Austria, while he resides at Lichtenworth lately. He was born to Wolfgang and Karin Thiem, who are both professional tennis coaches. He has a younger brother named, Moritz Thiem, who is also a prominent tennis player. Besides tennis, the player is a big football fan and is a supporter of the Chelsea football club. His love for football made him found his football club namely, TFC Matzendorf. Adding to his hobbies, he also likes to watch ski jump competitions and is also an animal lover.

Dominic’s father stated about his education that, academics and tennis are incompatible. However, he also believes that for a youngster, attending school is a necessity. Even though he was focused on education, Dominic’s tennis training remained paramount. His parents ensure that he had extensive coaching. As time passed, he drops out of school to pay full concentration to his tennis career. Thiem started home-schooling and to give time to tennis his father started a small tennis academy. The training house was one that merged tennis coaching with the conventional school system.

Dominic began playing tennis at the age of 6, where his father was his coach. When Thiem was 3, his father worked at Gunter Bresnik’s academy in Vienna in 1997 as a coach. He joined the academy at the age of 9, where Bresnik advised him to change his two-handed backhand to one-handed backhand. Thiem struggled with health issues while playing tennis at the age of 17. In early 2008, he was fortunate to enter the International Tennis Federation and begin his junior career.

On 3rd January 2011, his hard work paid off as his struggles were finally ended. He surprised the world by reaching to an ITF Junior circuit, where he was ranked world no.2 in combined singles and doubles. He ended his junior career with a 115-33 win-loss record, playing in singles, while 49-32 win-loss record, playing in doubles. Dominic started winning ATP events in 2013 and as a result, was qualified for the Austrian Open’s main draw in 2014, where he reached the 2nd round in the Grand Salm but Kevin Anderson defeated him.

At Mutua Madrid Open, he won against S. Wawrinka, which was his breakthrough. His next breakthrough came in his 1st US Open in 2014, reaching the fourth round and later lost against Tomas Berdych. In the 2015 Croatia Open, he made a thrilling win over Joao Sousa in the finals and won the title. Towards the end of the year, he won the 2015 Swiss Open Gstaad and achieved the world no.21 rank which later dropped to no.18 due to his high-profile performances. In 2017, French Open, he made it through the semi-finals and reached the quarterfinals. At US Open, he reached the fourth round and end up losing against the opponent. Until the French Open, he was unable to appear in many tournaments because of his ankle injury.

He met Nadal at the US Open in December 2018, where he reached the quarterfinals. He began his 2019 season with an injury at the Australian Open. However, returned with a bang, which is why his resilient victories over the biggies in tennis have earned him fame and recognition. He joined Spanish superstar Rafael Nadal in withdrawing from Tokyo Olympics on 17th June 2021. Dominic begins his 2021 grass-court campaign at the Mallorca Championships, where his opponent is Adrian Mannarino in the 2nd round on 22nd June 2021. However, it is predicted that Thiem will win in three sets.

As dating is a kind of distraction for a potential player like Dominic, he once called off his relationship to focus on his game. He was previously in a romantic relationship with Kristina Mladenovic, who is a French tennis player. They started dating in mid-2017 but separated in late-2019. They decided to broke up due to the distance factor. However, he has been dating Lili Paul-Roncalli since October 2020.

The professional player is rising bars on social media and generating more fans day by day. His Instagram account @domithiem has 1.4 million followers, while his Twitter account @ThiemDomi catches the attention of 262k followers. His highly an activist and socialist and loves to get involved with his fans and know their thoughts.

The Austrian athlete owns a few of the best luxury cars in the world, which is evidence of his high source income. He also owns a house in Lichtenworth, Austria worth $1 million. Thiem also has few brands such as, Adidas, Babolat, Bank Austria, Kia, Rolex, Red Bull, and Sky Sport that sponsor him besides his tennis profession. He is seen featuring in many commercials. His estimated net worth is $26 million. as per records, Dominic won a staggering amount of $11.1 million from June 2019 to June 2020. He is the 9th highly-paid player during that period. As of 2020, his biggest prize money is a whopping $27,247,047.