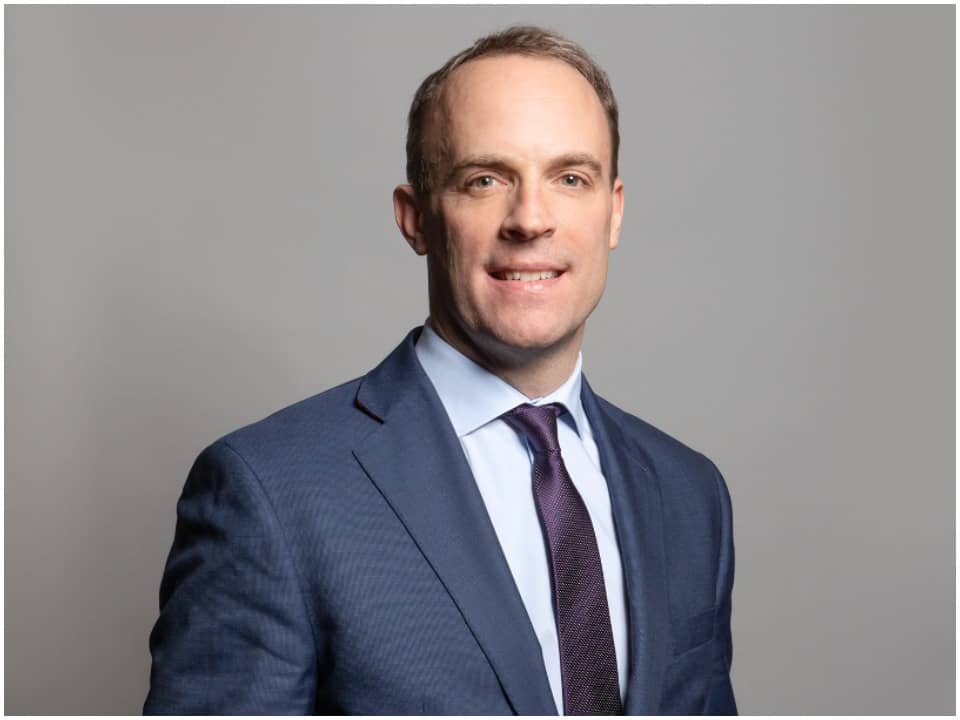 Dominic Raab is an experienced British politician who is currently serving as the First Secretary of State and Foreign Secretary who is serving at his position since July 2019. He is also known to have served as a member of the Conservative Party and also as a Member of Parliament since 2010.

Dominic Raab was born Dominic Rennie Raab on February 25, 1974. He was born to his mother Jean, who is a clothes buyer, and father Peter Raab, who worked as a food manager for Mark and Spencerin Buckinghamshire, England in the United Kingdom. As a student, Dominic attended Dr. Challoner’s Grammar School in Amersham. He then studied law at Lady Margaret Hall in Oxford. Later, he enrolled for Jesus College from where he earned the Bachelor’s degree of Art majoring in jurisprudence. After getting his Bachelor’s degree, he also earned a Master’s Degree in International Law.

After his graduation from Cambridge, Raab started working at Linklaters in London where he worked on project finance and competition law. Later in 2000, he joined the Foreign Office where he covered a large range of briefs which included leading a team at the British Embassy. As a lawyer, he also defended Tony Blair for his charge against Subpoena by former Yugoslav President Slobodan Milosevic. He worked as a Chief to Staff to Shadow Home Secretary David Davis and Shadow Secretary of State for Justice Dominic Grieve from 2006 to 2010.  Raab was elected to represent Esher and Walton in the 2010 election. Raab spoke about the coalition government’s plan to cut the budget deficit repeal the Identity Cards Act 2006 and supported to enact of Freedom Bills.

In August 2010, Raab received too much media attention as he requested that the pressure group 38 Degrees remove his parliamentary email address from his website. He also participated in the debates about giving prisoners the vote and extradition. Raab opened a debate in House of Common on March 7, 2012, focusing on the topic of Sergei Magnitsky and the Impunity of Gross Human Rights Abuses. Dominic on January 30, 2014, proposed an amendment to the Immigration Bill in order to deport all the prisoner who was given a sentence for a year or more. Raab won the general election again on May 7, 2015, with his seat with Esher and Walton and was appointed as Parliamentary Under-Secretary of the State at the Ministry of Justice under Michael Gove.

He addressed the representatives of the 46 other member states of the Council of Europe in September 2015. Raab was then elected in the 2017 general election with a reduced majority and was re-elected in the 2019 general election. On July 24, 2019, Raab was elected and appointed as a Foreign Secretary succeeding Jeremy Hunt, and gave him the title of the First Secretary of the State. In 2020, Raab announced that the UK won’t be involved in any trade with China even after the end of the Covid pandemic. In 2021, Raab spoke with the newly sworn-in U.S. Secretary of the State and his successor Antony Blinken in January.

As a lawyer and a politician, Raab married his wife Erika Rey. His wife is a Brazilian marketing executive who worked for Google till 2020. The couple lives happily together with their two children. They currently live in Thames Ditton, Surrey in England, United Kingdom.

Raab is a 47 years old man, who earns an estimated net worth of $ 5 million USD through his work as a politician, lawyer, and also writer. Dom has really done some exceptional work and has brought great improvement to his nation. Raab was also seen at the political headquarters and also with many other nation’s governments with whom he has maintained good relationships which would help the further government too.