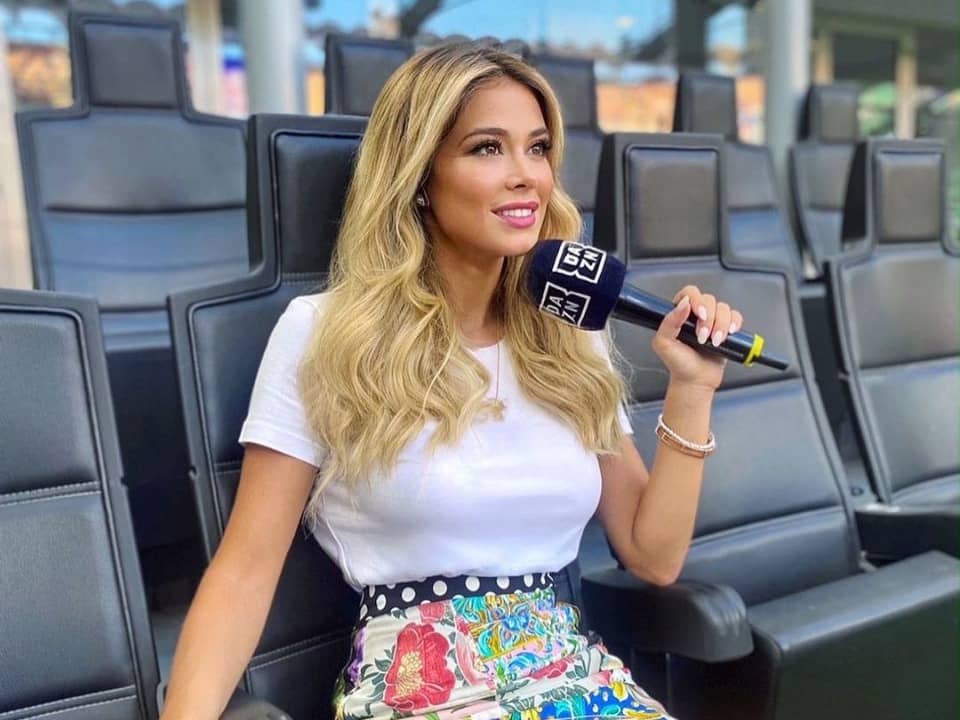 Diletta Leotta, in full Giulia Diletta Leotta is an Italian television presenter who belongs to Catania, Sicily. Apart from this, she is a dazzling diva and social media personality who quite often flaunts her beauty on her account.  Being a diva, Diletta’s relationship status is the kind of a matter in which most of her fans are excited to know. Also, she gained worldwide attention in 2019 when Napoli fans started chanting “fouri le tette” means “get your t**t out”. In reply to this, her reaction won the heart of the audience because instead of showing anger she simply showed thumbs down and walked away.

Diletta Leotta was born on 16th August 1991 in Catania, Italy to native Italian parents Rori Leotta and Ofelia. Apart from this, she also has a brother, Mirko Leotta with whom she spent her childhood days in her hometown. It is obvious that being a journalist, she must be a well-educated person as she studied law at Luiss University and finished graduation in 2015.

She and Can Yaman used to be very public about their relationship on their social media platforms. The Italian presenter has even shown her engagement ring in the media which is assumed to be given by her boyfriend Yaman. However, the breakup rumors have followed the couple and it seems to be intensified with time as both are seen separately while going to any important event.

The couple has continued to distant each other on major celebration occasions. They seem to be separated or either on the way of separation. The pair have not been seen together with each other since the second half of summer 2021. They seem to be seen individually while maintaining a different lifestyle. Their choice of celebrating or enjoying the summer’s vacation separately has not gone unnoticed by their fans. The pair continued to share their views, thoughts, and pictures on Instagram separately.

She is currently working on the television series named Serie A that is used to broadcast on DAZN. Earlier this, she used to present Serie B games on Sky Sport (Italy) from April to August 2018, she worked on the show named “105 Take Away” a program of Radio 105 Network as a host with Aida Yespica. She hosted another television reality series “2018 edition of Miss Italia”. In 2020, she co-hosted the 70th annual edition of the Sanremo Music Festival. She went to Luiss University and studied law in Rome and was later graduated in 2015.

The rumors seem to be certain after the gossip expert Alessandro Rosica claimed that the farewell between Can and his girlfriend Diletta is something you can count on in real. Rosica further affirmed that the relationship between the two has recently broken up following the quarrel that took place between both of them making them choose two different paths. Meanwhile, Diletta remained calm on social media with the ongoing rumors of her breakup with Can Yaman.

However, the sports presenter never misses an opportunity to upload any picture of her on social media during her summer vacation. The caption, she chose to put on her picture that further reads like “summer with the family” confirm that Diletta intends to devote her time with her nearest and dearest ones only. On the other hand, the Turkish actor has recently won the most important award at the Venice Film Festival which he gained without the support of his bae, Italian presenter, Diletta. The Turkish actors seem to be surrounded by his fans on their arrival on the red carpet. And it has been noticed that the personality was not being accompanied by his girlfriend Diletta.

Diletta Leotta is one of the most successful television presenters who has worked for different television reality series while being presenting the show. She is estimated to earn an annual income of around $ 300,000 USD. Dilleta is also very much active on her social media platforms including Facebook and Instagram. She often used to post her pictures while traveling with her parents or with her boyfriend.