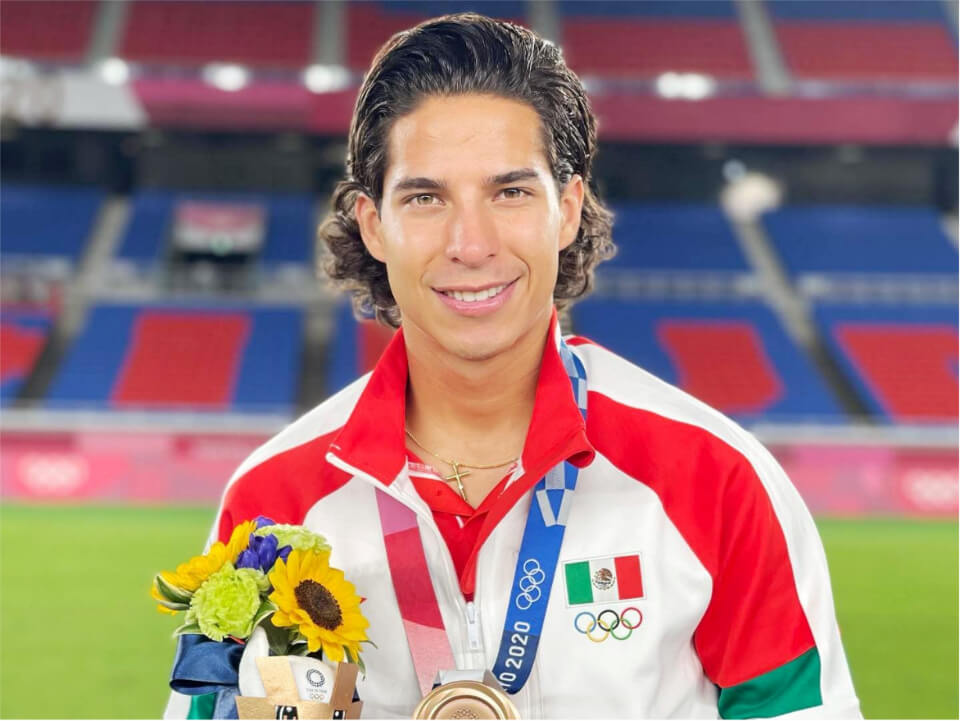 Diego Lainez is a professional young athlete from Mexico who is gaining a lot of fame in the ongoing FIFA 2022 world cup. He played football for the Primeira Liga club, Braga as a winger. In October 2022, he was named in Mexico’s preliminary 31-man squad by manager Gerardo Martino for the 2022 FIFA World Cup but did not make the final 26.

Diego Lainez was born on 9th June 2000 and he is 22 Years Old as of 2022. Diego Lainez’s father’s name is Mauro Lainez and his mother’s name is Mary del Carmen Leyva de la O. He was raised in Villahermosa, Tabasco, Mexico with his brother Mauro Alberto Lainez Leyva. His brother, Mauro is a 26-years old Mexican professional footballer who plays as a winger for Liga MX club Juárez. Diego is very close to his mom. According to his Instagram profile, on 19th February 2022, he share pictures of his mother with msg – “Happy birthday to the queen of the house❤️ 🔥🍷 I love you mom.”

Diego began his career at a very young age. In 2012, he was recruited by scout Ángel González to join Club América, a football club in Mexico City. On 1st March 2017, he made his competitive debut match against Santos Laguna and León. At the age of 16, he became one of the club’s youngest players. In 2018, he won over Pachuca at Estadio Hidalgo (Stadium) and became the fifth youngest player with Club América, who scored a two-goal in the club’s history. During training, he suffered a sprained ankle on his left foot, but he returned from the injury within two days. After the injury, he scored his first goal as a Club América player in the Estadio Azteca (stadium located in Mexico City) and defeated the Tijuana club team.

He became the youngest player to ever score during the playoff stage for the club. On 29th August 2018, he received his first call-up from interim manager Ricardo Ferretti for the Senior National Team, representing Mexico in International football. He played matches against Uruguay and earned his first cap. Later, he was called up by Diego Ramírez, a Mexican former footballer and manager, on 25th October 2018, to participate in the 2018 CONCACAF U-20 Championship. In April 2019, he was named in the Best XI to represent Mexico at the U-20 World Cup in Poland and included in the 21-player squad.

Diego joined La Liga club Real Betis, a Spanish football club in 2019. He made his debut in La Liga and won against the Girona football club. Next, he played 75 minutes and defeated the Athletic football club, Bilbao. Later, he became the youngest Mexican player to score in the UEFA Europa League. He also participated in the 2020 Summer Olympics and won the bronze medal with the Olympic team. On 29th July 2022, Lainez joined the Primeira Liga club from the city of Braga and made his debut on 12th August 2022 which resulted in a 3-0 victory over Famalicão, entering as a substitute in the 73rd minute. On 28th August 2022, he scored his first goal against Arouca and won 6-0.

Diego Lainez Leyva is the youngest single Mexican football player. He is not dating anyone or has not been in any love relationship. Presently. Diego focused on his football career and wanted to get an opportunity to join the senior squad at the Gold Cup.

He is a Left-footed Mexican football player who represents Mexicans around the world. He earned income as a professional young athlete and from commercial advertisement projects. On 10th January 2019, he joined La Liga club Real Betis on a five-year contract reportedly worth $14 million. It is safe to say that Diego Lainez earned an estimated net worth of around $3 million in 2022.