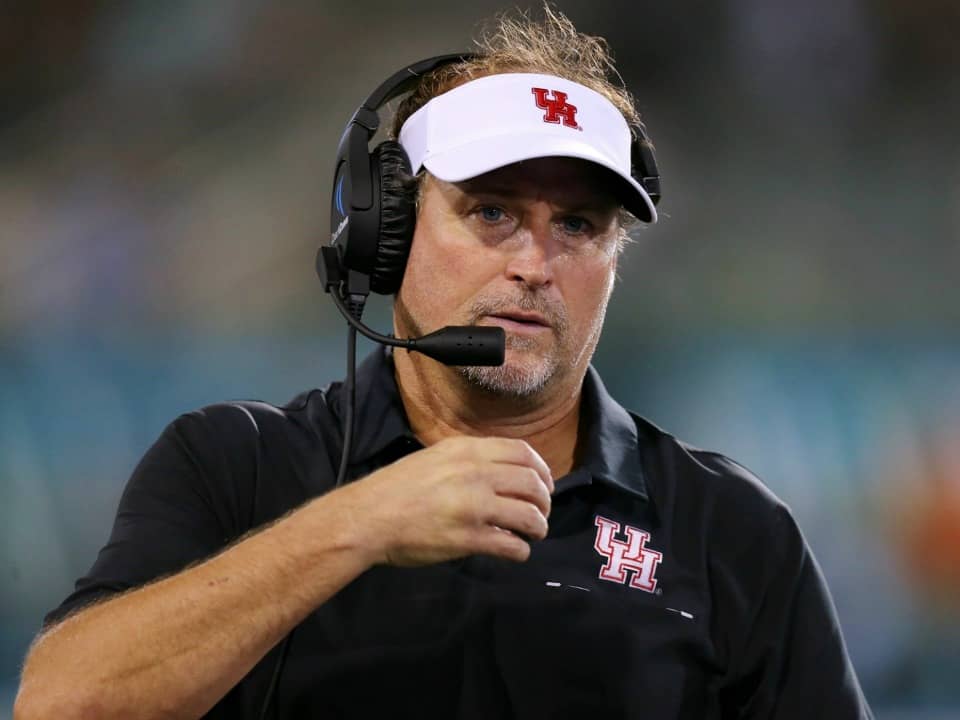 Dana Carl Holgorsen was born on 21st June 1971 in Davenport, Iowa, the USA to under the parenthood of Steve and Pat Holgorsen. Dana Holgorsen has been a great coach at Valdosta State from 1993 to 95. He has remained quarterback, receiver, and special team coach there under the head coach of Hal Mumme. At Mississippi College, he has guided the team for almost two years from 1996-98 as a quarterback, receiver, and special team coach. He has also remained a coach at Wingate (1999) as a quarterback and receiver coach.

He has remained an important member of the coaching staff at Texas Tech from 2000-07. During his career life at Texas Tech, he served as the inside receivers coach from 2000-04 and then was promoted to co-offensive coordinator alongside Sonny Dykes from 2005-06 and later was appointed as offensive coordinator in 2007. During his time at Texas Tech, he reunited his career life with the head coach named Mike Leach whom he had previously coached at Valdosta State under the head coach Hal Mumme.

He was being appointed to coach the team named Red Raiders who was earlier to his promotion as offensive coordinator was ranked at number 7 nationally. While he was running with his offensive coordinator position, his squad ranked at number 8 in 2006, and later in 2007, it ranked at number 3. In 2007, it led the team to attain an overall ranking of number 2 with total passing in the nation as 470.31 and total offense as 529.62 with an overall ranking of number 7 in scoring offense with 40:9. In the year 2006, the team Red Raiders finished the season while ranking at number 3 nationally in passing offense and at number 6 in total offense.

Dana received huge popularity while being in Houston as the coach for the football team. He was being appointed as an offensive coordinator at Houston and gained prominence recognition while being the most promising offensive coach in the country. He maintained two-year tenure with Cougars at Houston where he accounted for almost 563 yards of total offense per game, 42.2 points per game, and 433.7 yards passing.

When Dana was being hired at Oklahoma State, the Cowboys’ offense ranked at 61 nationally. In his first season, he led the team with a total offense as an average of 537.6 yards per game and at number 2 while being in passing offense and average 354.7 yards per game while being at number 3 in scoring offense. The post-season accolades have been yielding for Holgorsen as being an offensive player in 2010 when Brandon Weeden become the first OSU passer with All-Big 12 honors.

Dana Holgorsen married Candice Holgorsen and they together have three children named McClayne, Logan, and Karlyn. He had his home in Morgantown and shifted there in 2014 which is assumed to be the first luxury house to be built of cross-laminated timber. The marriage of Dana and Candice didn’t work and they divorced each other. However, details are not there about Dana’s wife. Previously, there had been claims that the pair rented a house to which the pair failed to fill their rent and had to face a lawsuit because of the irresponsible behavior of being not able to pay the fee for cleaning and repairs. The house was rented for around $2,500 a month to which the Houston athletic failed to do so and the number of Candice was unreachable.

The time when Dana left West Virginia, he signed the five-year contract for $20 million with Houston. As of 2019, his basic salary is around $3.7 million which is approximately $1.1 million higher than any other group of Five Head Coach.