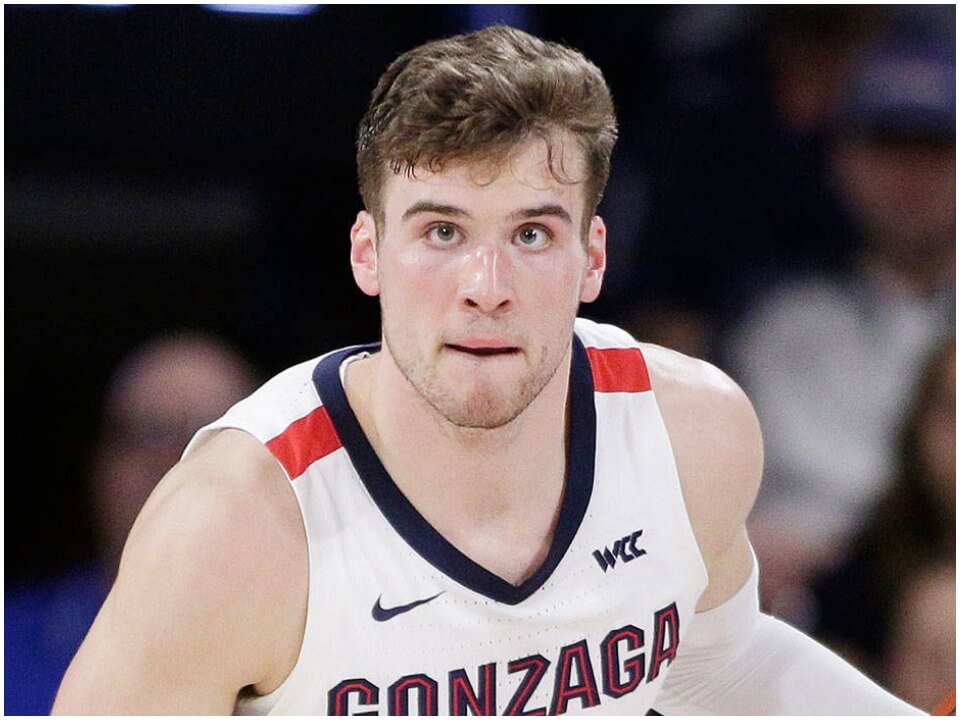 Corey James Kispert is an American college basketball player who currently plays for the Gonzaga Bulldogs of the West Coast Conference (WCC). He plays the position of small forward for the team and played high school basketball for King’s High School back in his hometown.

Corey James Kispert was born on March 3, 1999, in Edmonds, Washington, United States to father Craig Kispert and mother Desi Kispert. He has a sister named Casey and brother named Calvin. His grandfather Dainard Paulson comes from a football background and has played six seasons for the New York Jets. He has a great influence on Corey and even tried to convince Corey to play football but in spite of that Corey stuck to basketball since elementary school days. Kispert was born and brought up in Edmonds, Washington where he attended King’s High School and also started to play basketball. Due to his grandfather’s wish, he also played football while growing up but then eventually continued with basketball. Then he committed to play college basketball at Gonzaga over Notre Dame and Virginia after his junior season.

Corey started to play basketball at a young age, while he was still enrolled in high school, as a junior, he averaged 23.9 points, 6.8 rebounds, 3.4 assists, and 2.3 steals per game and led the team to their second straight state title and was named the MVP of the State Championship Tournament. Then in 2017, he started to attend, Gonzaga where as a freshman he splayed all the games for Gonzaga starting in 7 and averaged 6.7 points and 3.2 rebounds per game. On the opening round of 2019 Battle 4 Atlantis, against Southern Mississippi, Kispert scored 28 points and made seven of eight three-point attempts. In a match against North Carolina, he also managed to score 26 points with five three-pointers.

By the end of the regular season, Corey was named to the First Team All-West Coast Conference. He was also declared for the 2020 NBA Draft but did not hire an agent. Kispert was named to the Preseason All-West Coast Conference team in his senior season and even managed to score 1,000th career point against Kansas. He was named as the WCC Player of the Week on Jan. 20 and prior to the season was named First Team All-WCC by Athlon. Currently, he is named as the No.1 player of Gonzaga and is expected to be a top selection in this year’s NBA draft.

The 22-years-old basketball player is currently in a relationship with Jennifer Wirth who attends the same college as Corey and also happens to be a member of Gonzaga Women’s basketball team. The two began dating in March 2018 and have been together to date. Jennifer attends almost all of Corey’s games showing her love and support for him and his team. Corey is active on all social media platforms like any other player of her age. He goes by the username @ckis24 on Instagram and has over 37.6k followers with a verified account. Kispert is also a Twitter and Facebook where is often seen posting insights from his personal life and clips from his basketball matches.

Though there are no reports of Kispert’s salary, considering his stats and the salary of an average college basketball player his net worth can be estimated to be not more than $1 million as of 2021.