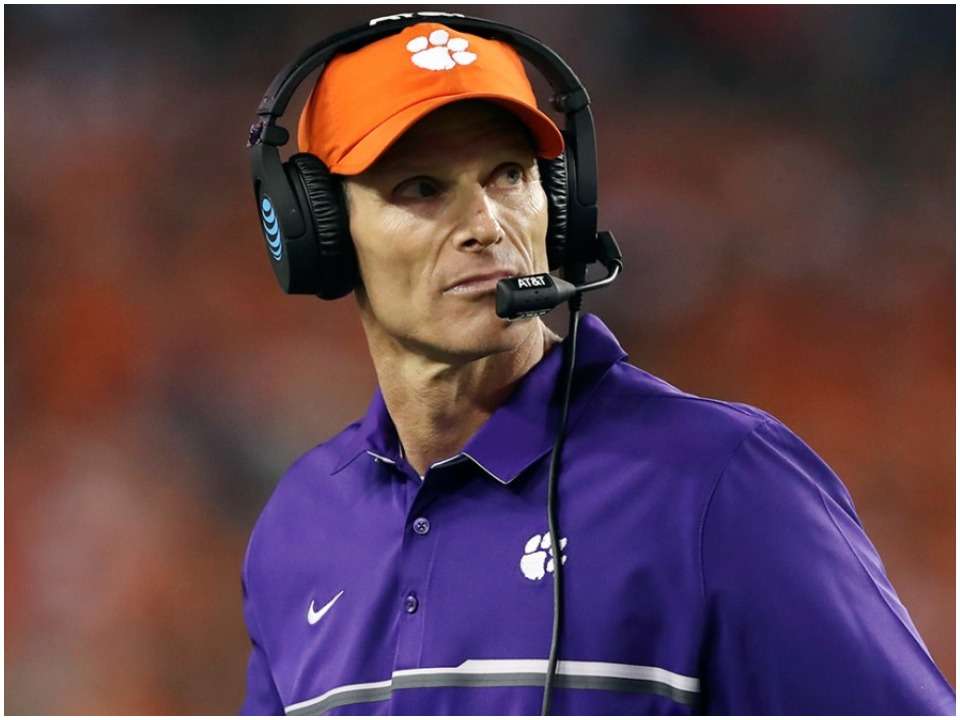 Brent Venables is an American personality who is a famous football coach and a defensive coordinator for Clemson. Although he is one of the frontrunners who can be named the new coach for Oklahoma Sooners. Brent received lots of attention after this news and the football fans especially Sooners fans want to know more about him like his education, salary, and other things.

Brent Venables was born on 18th December 1970 to his parents named Ron Venables and Nancy Schumaker. Brent was the youngest of all children born to his parents. He was having two older brothers named Arthur Kirkpatrick Venables and Ken. Brent’s father was a fighter pilot and worked in the Air Force. Both of his parents got separated when Brent was just two years old. In one of his interviews, Brent confessed that his father terminated the marriage because he didn’t want to stay married for longer.

On the other hand, Brent’s mother Nancy Schumaker was raised in a catholic family. All of Nancy’s siblings went to good colleges, schools, and high schools. Nancy wanted to get married, so she tied a knot with Ron. But, the separation happened and Nancy ended up while not going anywhere for help. While growing up, Brent worked hard and bought a house for his mother who always had to work hard to earn livelihood when Brent was young.

Brent’s mother started searching for a job after separation. She had to look after three boys that were born to her. Brent was only three when he saw the hardship of his mother. She was the one who taught ethics, the importance of hard work, and the necessity of doing consistent things in life. Brent’s childhood was full of hardships. His mother had to struggle every day to complete the necessities of her children.

Initially, Nancy denied taking any kind of financial assistance from her parents but because she had to carry three children, she had to carry a little amount from Brent’s grandparents and his father. She did everything to get a good life for her boys. She worked at the soda fountain, as a secretary, at the pop shop, as a house painter, and whatnot. The mother of three had to work a full day to provide meals to her children.

From 1999 to 2011, Venables had a long career journey of teaching football at the University of Oklahoma. There, he served as the defensive coordinator and linebacker coach. Previously, he coached Stoops at Kansas State. Later, he was brought to Oklahoma by the Stoops. He coached linebackers from 1996 to 1998 and later was appointed as defensive run game coordinator in 1998 after serving as a graduate assistant from 1993 to 1995. Venables was selected to be the head coach of several schools including Kansas, Miami, Kansas State, Clemson, and Texas Tech. finally, Venables accepted the position of defensive coordination that he held previously until 2004. He got committed to Clemson as a defensive coordinator where he was offered to have the base salary of $750,000 and $1 million.

Brent is married to Julie Venables. The couple is living happily married and some spending meaningful days while being together. They together share two sons- Jake Venables and Tyler Venables (both of the sons play at Kansas) and two daughters. Brent is one of the moderate personalities. In comparison to what happened to his mother while raising Brent and his other siblings; Brest is having comparatively a peaceful life.

Julie Venables is a loving, caring, and gorgeous personality. She was born on 14th September 1973 in Hutchinson, Kansas. She was pursuing her bachelor’s degree in science in nursing at KSU when she met Brent Venables who was a senior by then. They started meeting each other after Julie got herself transferred to Washburn University for nursing school in January 1995. Later, they tied a knot together in July 1997. Julie was a registered nurse at Memorial Hospital before she quit her job for being a full-time mother.

In 2017, Brent Venables was the second-highest paid assistant football coach who used to teach the style of playing football at different colleges or high schools. He used to receive $1.7 million from Clemson. By that time, the only coach who was ahead of him was Dave Aranda of LSU who used to get $1.8 million by then. As of 2021, Brent’s net worth is somewhere $12 million.