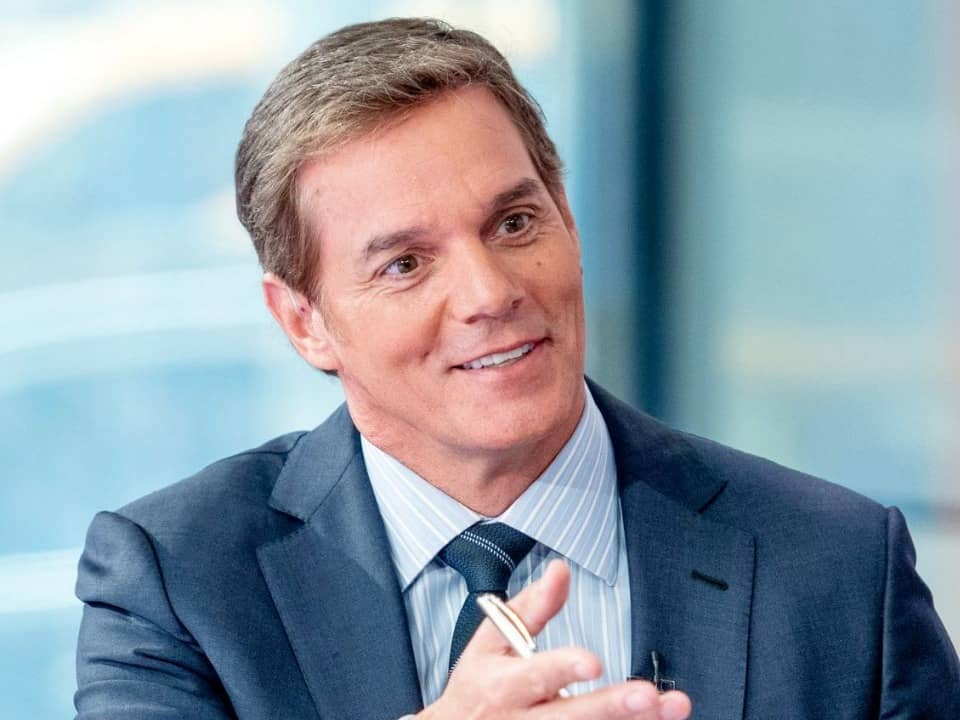 Bill Hemmer is an American journalist who now serves as the hour-long news anchor for Fox News at 3 p.m. Shepard Smith resigned from the station after 24 years of service, and Hemmer took over the job in January 2020. He is also the Chief Anchor for Fox’s breaking news.

Bill was born on November 14, 1964, in Cincinnati, Ohio, and spend his childhood with his four siblings. His mother Georganne Hemmer is a housewife while his father William Bill is a retired executive from a manufacturing company. Later he went to Our Lady of Victory (Cincinnati), a catholic parochial school in Cincinnati, before transferring to Elder High School in 1983.

Bill and a friend established a radio show in his senior year of high school that played 15 minutes of music before classes started. This was the catalyst for his interest in broadcasting, according to him. Hammer earned a Bachelor of Arts in broadcast journalism from Miami University in Oxford, Ohio. He was a member of the Delta Tau Delta fraternity at Miami University and attended the Dolibois European Center at Miami University.

Interning at radio stations WMUB-FM and WOXY-FM, as well as at Cincinnati’s NBC affiliate, was the beginning of his radio career. He also worked at WLWT-TV as a sports producer and subsequently at CBS station WCPO-TV as a weekend sports anchor. During his nearly year-long journey to China, Vietnam, Nepal, India, Egypt, Israel, and Eastern Europe, he penned dispatches, taped interviews, and took photographs that became known as Bill’s Excellent Adventure. The broadcaster was able to walk away with two regional Emmys for Best Entertainment Program and Best Host, owing to this collection.

After that, he got a job at CNN’s International Headquarters in Atlanta, Georgia. Hemmer joined CNN as the host of American Morning, CNN Tonight, CNN EARLY Edition, CNN Morning News, and CNN Live Today, among other shows. He covered the 1996 Atlanta Olympics bombing for CNN along with spending 37 days in Tallahassee, Florida during the 2000 U.S. presidential election’s Florida election recount.

Bill began reporting for Fox News in August 2005, covering events such as Hurricane Katrina’s aftermath, the 2006 Israel-Lebanon Crisis, the Iraq War, and the British sailors held hostage in Iran. Hemmer also kept an eye on FNC’s “Billboard” throughout election nights in 2012, 2016, and 2020. Bill Hemmer moved from CNN to Fox News in 2005. He rose through the ranks of the station to become one of the best, capable of handling a variety of critical reports.

Hemmer established the William G. Hemmer Scholarship in 2005 to promote journalism. He established this scholarship to help any qualified Elder High School student who is interested in journalism and tours the world. On election nights, his “BillBoard” is designed to convey data to viewers by collecting the vote in real-time from precincts across the country. From the Sandy Hook Elementary School shooting in Newtown, Connecticut, until the Boston Marathon bombing in April 2013, Hemmer was the network’s principal correspondent and anchor. Hemmer traveled to Helsinki, Finland, in July 2018 to cover President Trump’s meeting with Russian President Vladimir Putin.

Hemmer covered President Trump and Chairman Kim Jong-nuclear un’s meeting in February from Hanoi, Vietnam, before wrapping off the assignment at the DMZ in South Korea. In 2020, he aired Bill Hemmer Reports, a weekday afternoon newscast, as the Chief Anchor for breaking news and other important events. Hemmer live claimed on August 10, 2021, that Karl Marx wrote Mein Kampf, which was written 42 years after Marx’s death by Adolph Hitler. In 2021, Fox News announced a new weekday programming roster, with Hemmer and co-anchor Dana Perino returning to America’s Newsroom.

Although the award-winning journalist has kept his personal life private from the press, he was said to be dating Dara Tomanovich, an actress and model. The couple started dating in 2005, but tragically, they split up in 2013. Bill has not been associated with any romantic relationships since then. Currently, the well-known journalist is unmarried and rumored to be single. Bill was the subject of a gay rumor at one point. However, there is no substantial evidence that he has been involved in a same-sex relationship.

Bill Hemmer is living a luxurious lifestyle, thanks to his earnings as a top journalist, having spent 10 years as a reporter and anchor at CNN, one of the best news networks in the world, as well as spending over ten years at Fox News. His annual income at Fox News is reported to be over $400,000, while his net worth is estimated to be around $9 million.