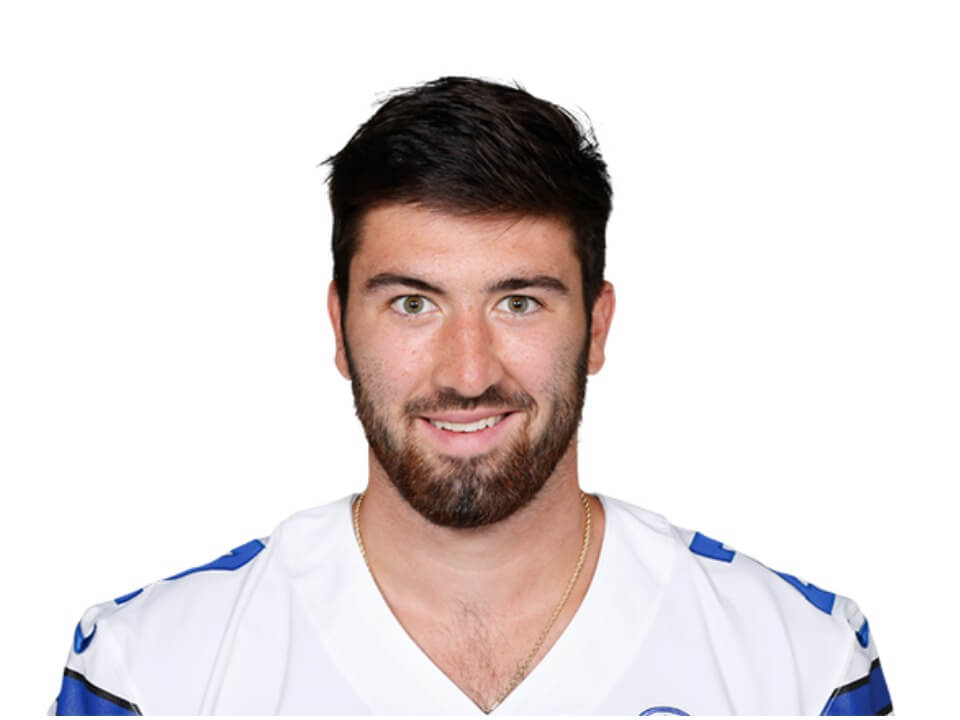 Ben DiNucci is a well-known and renowned American football player. He is a quarterback for the National Football League’s Dallas Cowboys (NFL). He was a James Madison University football player and The Cowboys selected him in the seventh round of the 2020 NFL Draft.

Ben DiNucci was born on the 24th of November 1996 in the city of Atlanta in the state of Georgia. He is a 23-year-old man at present. When it comes to his education, he studied at Pine Richland High School. As a sophomore, he was named the starting quarterback. He also used to play basketball for Joe McCarthy, Mike McCarthy’s brother. In addition, as a senior, he became the first quarterback in Pennsylvania history to throw for 4000 yards in a single season.

After enrolling at the University of Pennsylvania, Ben DiNucci began his academic career. He backed out of his agreement and took a football scholarship from the University of Pittsburgh rather. As a redshirt freshman, he served as backup quarterback to Nathan Peterman. In 2016, he made his debut against “Duke University” in the last offensive series. He also came in late in the third quarter of the same year to replace an injured Peterman. In a 24-31 loss to Northwestern University, he completed 3 of 9 passes for 16 yards, one score, two interceptions, and two carries for 18 yards. After senior Max Browne sustained a season-ending right shoulder injury, he was appointed the starting quarterback before the seventh game of his second season against North Carolina State University.

He was also named to the CAA’s third team. Against Elon University, Ben threw for 316 yards and a touchdown. Against the University of Rhode Island, he set a career-high with four touchdown passes. As a senior, Ben DiNucci started all 16 games at quarterback, passing for 3441 yards and 29 touchdowns while completing nearly 71% of his passes. In the championship game, he completed 22 of 33 passes for 204 yards, two touchdowns, and one interception. He’s also been named to the All-CAA team, the CAA Offensive Player of the Year, and the AFCA first-team All-American. After completing his undergraduate career, he was ranked third in James Madison incompletions.

When it became evident that Ben DiNucci was considering signing with either the Cleveland Browns or the Chicago Bears, he was selected in the seventh round of the 2020 NFL Draft by the Dallas Cowboys. DiNucci made his NFL debut against the Arizona Cardinals on October 19, 2020, in relief of Andy Dalton. He entered the game against the Washington Football Team on October 25, 2020, after Dalton was forced to leave due to an injury. DiNucci completed his first pass to Amari Cooper for 32 yards. The Cowboys were defeated 25–3.

Due to Dalton’s concussion protocol, the Cowboys announced on October 31, 2020, that DiNucci will start for the first time in his career on Sunday Night Football against the Philadelphia Eagles. DiNucci completed 21 of 40 passes for 180 yards, lost two fumbles, and was sacked four times as the Cowboys fell 23-9 and for the fourth time in franchise history failed to score a touchdown in back-to-back games.  It also squandered a strong defensive showing by the Cowboys, who forced four Eagles turnovers. Garrett Gilbert passed DiNucci on the depth chart for the backup spot in the following games.

He is currently unmarried and in a relationship with Bryn Recker who quite frequently appeared in his Instagram posts. There is not much known about his previous relationships available on the internet because he is still quite a new face in the game.

At the time when he started his career, he was getting around $610,000 base salary for 2020. Also, he signed a four-year contract of about $3.3 million which made him one of the lowest salaries players of the season. Apart from this, he was also given the signing bonus of $95,148 just to make him feel secure and assured of his contract. His net worth is estimated to be between $3 million and $5 million as of 2021.