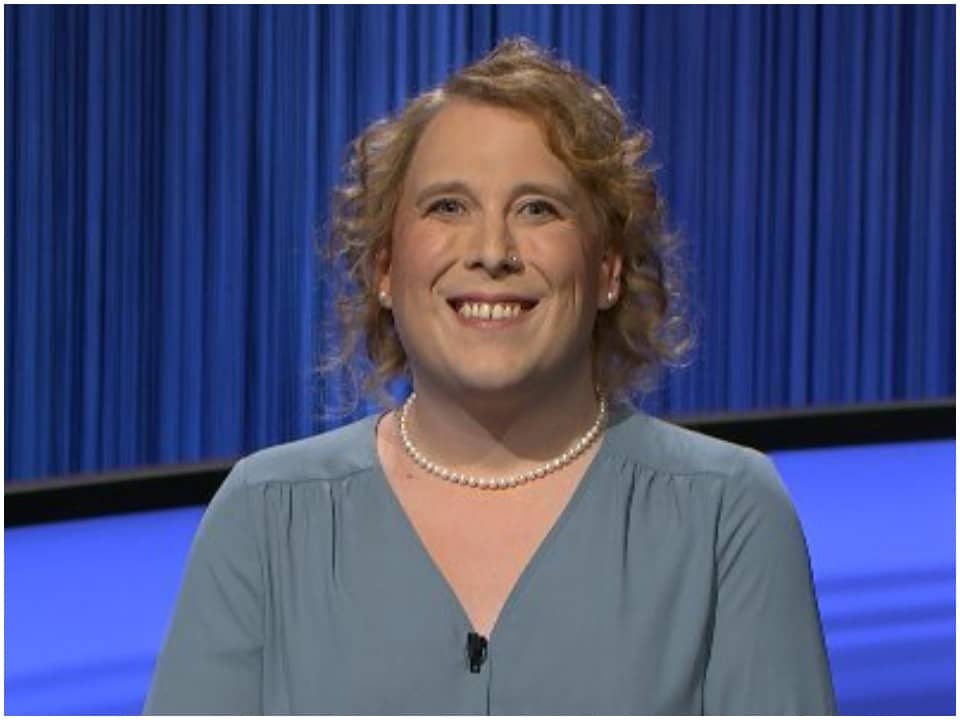 Amy Schneider is the first transgender woman who qualified for the Tournament of Champions. She is an American Engineering manager currently known to be a contestant on the quiz tv show Jeopardy!. She immediately gained a lot of recognition for being one of the few trans persons to be on the show. Amy has maintained a great streak and has been standing strong as a competition for other contestants. Amy Schneider is a person of interest who is making the waves as a contestant on Jeopardy. She started her remarkable run on the show by becoming the champion for the first time on Wednesday 17th November 2021 and ever since then she is unstoppable and breaking so many records.

Amy created a record for herself on the last episode of the game which premiered the last Friday. She became the first-ever woman contestant to gather more than $1 million during the regular season play. Her unusual style of answering sometimes left viewers in confusion but she is a genius and acquired tons of general knowledge. She has created curiosity for many of her fans to know about her. Amy has made $1,382,800 from her 40-game win streak but he was finally dethroned by Rhone Talsma. At present, she is the fourth-highest ever winning in the regular season and heading towards breaking the record of Ken Jenning’s 74-game streak but she’s got a long way to that.

Amy Schneider was born on May 29, 1980, in Dayton, Ohio. She was born as a male under the name Thomas E Schneider to her parents James T Schneider and her mother whose name has not been shared. Her father worked at the Dayton Metro Library and she grew up with her brother John Schneider. She belongs to a family that is well-educated and whose members value quality education and general knowledge. Amy is an engineer manager who is currently working in Oakland, California and is super active as well as dedicated to her work. She went to the University of Dayton and earned a bachelor’s degree in science.

Amy Schneider got her first job as a software developer in NexTech. Previously, she worked as a software engineer with the engineer team lead in San Francisco. She has also worked as an engineering lead in Softbank Robotics America of the United States. There, she worked in the role of engineering manager while developing her skills and management towards the work. Amy Schneider owes the skills of engineering management, REST Stress Analysis, Catia, Ruby on Rails, Mobile Applications, Amazon Web Services Aws, Git, etc.

Since the start of the year 2021; she has been working as an engineer manager at Fieldwire Company. She also owes an account in “Podchaser” where she kept doing her podcasts every day. Talking about her social media profiles, she has made her account private. While being on the show Jeopardy, she disclosed some information about her life. She revealed that she had to go through bullying and was one of the hatred personalities of many people in her school. She was consistently bullied by many of her mates in school.

Amy Schneider is a transgender who appeared on the show Jeopardy! She has been the winner of the show which is a matter of great happiness for all of her fans. Amy became the winner and defeated the other contestants Andrew He and Max Mcdonald. She defeated the five-time winner Andrew He and became the sole contestant to answer the final Jeopardy clue correctly. Currently, she is on 33 games win-streak and would be the returning champion for tonight’s episode.

Amy would be defending her title against Frances Garrison and Jorge Quinones on the episode of 17th January 2022. So far, she has accumulated an amount of $1,382,800 from 40 consecutive wins and was looking solid but lost to Rhone Talsma on the 26th January 2022 episode. Her remarkable performance so far amused viewers and they think how is she so smart? In an interview she said,

“Another factor, of course, is my privilege. Unlike most people in history, I wasn’t born into grinding poverty, and my parents believed in the value of knowledge as its own reward. Moreover, I am white, and until well into adulthood, was perceived as male. A good place to start for that is by studying J!archive.com. That has every Jeopardy! clue ever from the show’s history, and that’s definitely been my main thing during idle times, on commutes.”

Amy is probably one of the best and sharpest contestants in the history of the show. She is currently competing against toughest competitors of the recent times in the ongoing Tournament of Champions. Although, it’s not an ideal start for her as she couldn’t register victory in the first day of finals as Andrew He managed to win the first day. Now, Amy will be trying to win the remaining days of the finals against Sam Buttrey and Andrew He.

After the show was aired, Amy posted on Twitter that she was not only the one transgender to win the quiz. She wrote that there have been a handful of personalities on the show who have been transgender and won the quiz consecutively. She explained and supported her words while saying that Kate Freeman was the first transgender who became the winner of the quiz on 16th December 2020.

A number of fans are praising the work of Amy pointing out her victory over the show. Many people have come forward saying that she won the heart of many during the Trans Awareness Week which started on 13th November and ends with the remembrance on 20th November. Amy revealed that she was able to win the momentous for herself as she was trying to appear on the show for almost 10 years.

Amy has publically come out as a trans person and went through sex alteration surgery to become a naturalized woman. She previously recognized herself as a male and was married to Kelly Anneken in 2004. She got divorced in 2016 after she started recognizing herself as a female and separated from her partner to go through the process. Amy moved to Oakland, California after her marriage and has been settled there ever since. She has always suffered a lot of hate and bullying during her college and school years where she was often labeled and called a trans person even though she has a male appearance due to which she suffered from a lack of confidence.

Recently Amy has tied the knot secretary with her girlfriend Genevieve and they love each other so much. The necklace Amy’s been seen wearing throughout her ongoing streak on the Jeopardy! is actually a gift from her girlfriend. It was given to Amy on her first birthday which they spent as a couple and ever since then, it became an important part of her. Although Gene is way too far from her, Amy likes to wear it because it would remind her of their sweet relationship. Scheneider told in an interview,

It was the first significant time I’d spent apart from her since we’d started dating. And so having that was just a nice, just sort of comforting reminder that, that she was at home waiting for me.

Looking at her experience and profile on Linkedin, we can assume that she might be earning a hefty amount in form of a salary mostly. She has a moderate personality thus, her net worth is assumed to be more than $1 million that’s for sure. Amy has earned a few skills majored in an engineering subject. She appeared for the first time in Jeopardy! and has been a great fan of the show and was consistently trying to appear for the show for many years.