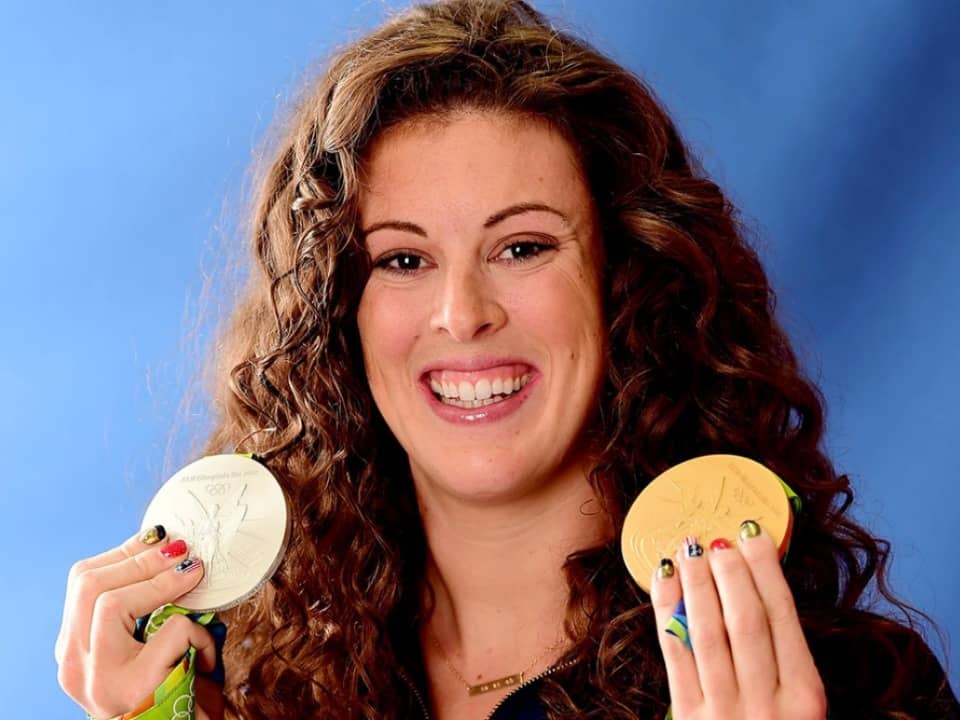 Allison Schmitt is an American Swimmer famously known as a four-time Olympian holding eight Olympic medals. She is a freestyle swimmer and is one of the most talented and respected female athletes today.

Allison was born on 7th June 1990 in Pittsburgh, Pennsylvania, USA.  She was born to her parents Ralph and Gail Schmitt and grew up in Canton. She is known to have four siblings, Derek, Kirsten, Kari, and Sara. Her father works as a financial analyst while her mother is a system project manager. She started swimming when she was eight following her sister Kirsten’s steps. All her siblings are also athletes and are either playing professionally on the collegiate level.

Currently, Allison is 31 years old. Allison completed her elementary and middle school education at Canton Charter Academy. She graduated from Canton High School in 2008 and later pursue college, she attended the University of Georgia and graduated in the year 2013 with a major in Psychology and a minor in child and family development.

She started swimming at the age of 8 and in her initial years, she trained at the Ann arbor swimming club. She gradually picked up the skill and participated in the 2007 Junior National Team Competition. During her senior year of high school, she began training along with Olympian Michael Phelps under his coach Bob Bowman and went to the 2008 Summer Olympics where she won her first-ever Olympic medal with a Bronze in the freestyle event.

After high school graduation, she began swimming for the University of Georgia and also started participating in the NCAA Competitions. She became NCAA national champion four times in 2009, 2010, and 2011. In 2009, she also participated in the World Aquatic Championships in Rome and Secured a Silver Medal while in the 2011 World Aquatic Championship in Shanghai, she managed to win a Gold. In 2012, she competed at the Summer Olympics in London and won a total of five medals, 3 gold, one silver, and one bronze. She then competed at the 2015 Pan American Games and earned a gold and silver medal.

The following year, she competed at the 2016 Summer Olympics and also became one of the captains. She won a gold and a silver medal at the events. In 2019, she won a silver medal at the Pan Pacific championships and 2 silver medals in the World Aquatics Championships in Gwangju. Recently in 2020, she competed at the Olympic trials and is now selected in the USA national swim team to compete in the 2020 Tokyo Olympic to be organized in July 2021. She is also the Captain of the team and is set to compete in her first event of 200m freestyle on July 26th.

Allison has not shared much about her personal life but she is known to be a close friend of swimmer Michael Phelps. She was once rumored to be dating swimmer Grant Hackett who is a mutual friend of both Allison and Micheal Phelps. Allison loves scrapbooking, photography, outdoor sports, and board games. She also loves watching movies while getting a massage. She has shared she suffered depression due to public attention after her return from the 2012 Olympics which affected her performance severely. Due to this, she had to take therapy in order to get rid of it once and for all. Moreover, her cousin committed suicide the same year. Allison currently has 147k followers on her Instagram account and also owns an active Twitter handle since 2011 where she currently has 61.9k followers.

She has been a professional swimmer for several years and has earned a lot of wealth through her wins in championships and also through endorsements. Her net worth as of 2021 is estimated to be around $2million.

Allison Schmitt has now become a name in female sports that everyone knows. She has become an idol for several young swimmers and her achievements have decorated both her and her countries pride. She is highly focused and talented and also loves to enjoy her life to the fullest. We wish her all luck for the Tokyo Olympics 2020.