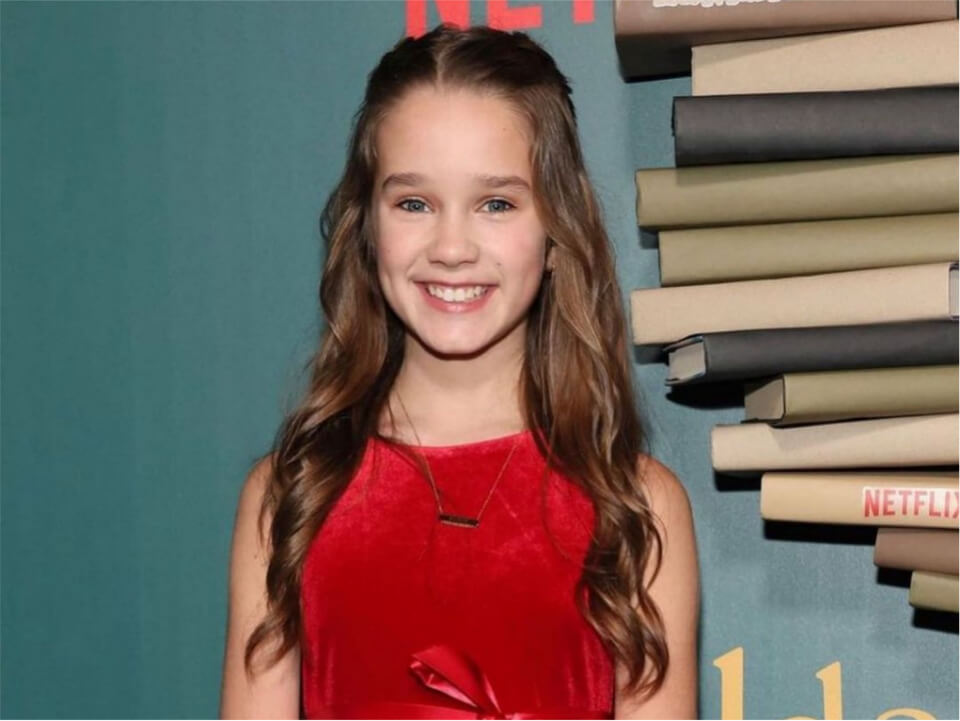 Alisha Weir is a household name in the USA after the little girl broke her newest and yet most prominent role in the last December’s Netflix show Matilda the Musical (by Roald Dahl). The show was directed by Matthew Warchus, who said that he auditioned hundreds of children but could get the spark in the eyes of no one except Alisha. “She’s a brilliant listener,” Warchus said while interviewing with Netflix.

Alisha Weir was born in 2009 in Dublin, Ireland, and makes her 14 years old as of 2023. She began her acting on the stage of the Talented Kids & MVW Talent Agency’s 10th Anniversary Show, an annual event that was held at her school called the Talented Kids Performing Arts School & Agency. The young actress is the youngest one in her family. She has two older sisters, Katie and Emma Jane, who are both interested in performing arts.

Alisha’s eldest sister has just completed her college in musical theatres (as of December 2022, information from The People). Their mother’s name is Jenny, and their father’s name is Mark. The middle child of the family is named Emma Jane, who just began her UCD doing film, music, and drama as well (as of December 2022). All three daughters of the Weir family have developed an interest in cinema and arts. The three sisters seem close to each other and often remain involved with each other’s work.

Alisha once also appeared in Katie’s TikTok videos. Alisha began her film work with her debut role in the movie Don’t Leave Home, released in 2018. It was the time when Alisha received a zoom call from the side of Matilda, the Musical director Matthew Warchus, the whole family was with Alisha, and Alisha went into tears. Her eldest sister (Katie) recorded and posted it on TikTok. One of their emotional yet sweet moment got nearly 1.8 million likes.

Alisha is not only a child actress but also a singer. Before becoming famous for Matilda’s featured titular role, she appeared on The Late Late Toy Show and performed a rendition of Cyndi Lauper’s “True Colors” in 2017. She also sings songs or tracks like “Miracle,” “Naughty,” “When I Grow Up,” and “Quiet” from the Matilda the Musical soundtrack, although not as a professional singer (we guess!).

Concerning her singing talent, her mother Jenny says that she always could catch the voices and follow others, whether in singing or other talent or skills. She often attended her singing classes with her other schoolmates or girls. She would know all the words of the songs and do her classes as well. Matilda is one of the most significant roles of her life that made her achieve popularity in the Hollywood world. She has also acted and shown her skills in the comedy Wicked Little Letters.

She has also received credits for performing in the songs & videos like “Miracle,” “Naughty,” “Naughty (Reprise),” “When I Grow Up,” and “Quiet” – all from the film adaptation of Matilda the Musical. Not only this, but she also lent her voice to the English localization of Two by Two: Overboard!

Before getting famous in December 2022 with the release of the film Matilda the musical, she was seen in Michael Tully’s Don’t Leave Home, the horror film released in 2018. Alisha Weir has also worked in the featured role of Laura in five episodes of Darklands (2019). Her work, professional life, and films have been managed by the agency called “MVW Agency.”

Alisha is only 14 years old as of January 2023. She is yet to achieve a lot with her talent and skills. We wish her luck in achieving good academic grades, skills, and talents in films and attaining the wonder of life.

Alisha is available on Instagram with the handle name @alishaweir123, where she has posted the name of her upcoming film of the year – Wicked little letters 2023. You can also catch her on Spotify with the name- Alisha Weir, posting the songs of her work.

Alisha’s estimated net worth is nearly $1 million, as she is only a child actress, singer, and talented personality with no doubts!