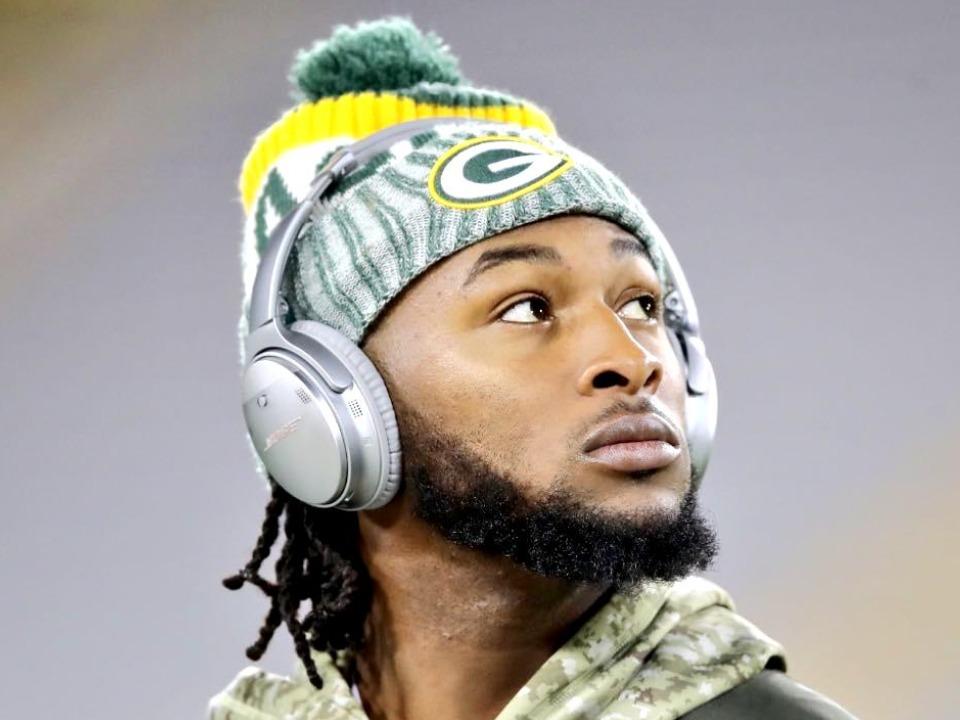 Aaron Jones is an American footballer, playing at the running back position with the Green Bay Packers from 2017 to date. He has been playing fantastically and has numerous rushes and touchdowns. He was drafted in the fifth round by the Packers in National Football League. Aaron has previously played for his college team Miners, University of Texas at El Paso. He has an immensely huge base salary of a total of $3798000 from 2017.

Aaron Jones was born on the 2nd of December, 1994 in Savannah, Georgia. His family includes parents, Vurgess and Alvin Jones Sr., elder brother Xavier, twin brother Alvun Jr, and sister Chalsirae. Both their parents were serving in US Army as non-commissioned officers due to which their family had to live in Germany, Kentucky, Tennessee, Virginia, and near the Mexican Border as per their postings.

His father retired and started his own marketing company to jump-start the recruiting process for his sons before Aaron’s senior year. He looked up to Emmitt Smith, Percy Harvin and Tyrod Taylor as his prime inspiration. Jones completed his high school studies at Burges High School in El Paso, Texas, and later attended the University of Texas at El Paso. He also got a three-star composite from 247sports.com.

Aaron went to the University of Texas at El Paso and played football for UTEP Miners during the period of 2013 to 2016 under the guidance of head coach Sean Kugler. Jones played in nine games as a freshman. He had 11 carries for 127 yards and 2 rushing touchdowns in his collegiate debut besides New Mexico. Jones had pretty good records to his name in his college career and with his fierce gameplay, he managed to attract the attention of the giants.

Green Bay Packers drafted Jones in the fifth round and 182nd overall in the 2017 NFL Draft and signed the contract on 5th of May, 2017. As a running back he was the 19th one to be drafted that year. Jones landed an opportunity to play in the Thursday Night Football match, in which he had 13 carries for 49 yards and his first career rushing touchdown in the 34-14 victory match with Chicago Bears in the fourth week when Ty Montgomery and Jamaal Williams got injured. In the following week, Jones had total 19 carries for 125 yards, one lone target for a 9-yard gain.

After that in the 2nd Quarter of that game, he had the 2nd touchdown of his career when he rushed up the middle for a 7-yard touchdown. He had 17 carries for 131 yards and one touchdown against New Orleans Saints in the 7th week. He concluded the Rookie year with 448 rushing yards, a team-leading 4 rushing touchdowns, 9 receptions, and 22 receiving yards.

Due to the legal troubles, he faced in 2017, he was suspended from the first two games of the 2018 season for violating the NFL’s Substance Abuse Policy on the 3rd of July. Later in September, on the 23rd he got to play his first match of the season against Washington Redskins in which he rushed 6 times for 42 yards to lose. He rushed 11 times for 65 yards and one touchdown for a 22-0 win against Buffalo Bills in the following week. Aaron continued carries with Williams and Montgomery while taking over the starting duties in the sixth week.

He qualified for the first spot on NFL leaderboards in terms of yards-per-rush at 6.02 by the ninth week. In a 31-12 victory against Miami Dolphins in the tenth week he had 15 carries for a career-high 145 yards and 2 rushing touchdowns. Jones got his 1st NFL receiving touchdown in the following week and he went for the next one in a loss to Seattle with a score of 24-27.

He scored his fifth touchdown in 3 games en route to 93 yards besides Minnesota Vikings in the 12th week. He was placed on the injured reserve for a knee injury in 15th week on 18th of December. His season ended with 728 rushing yards, 8 rushing touchdowns, 26 receptions, 206 receiving yards, and 1 receiving touchdown. He had 9 average touches per game and was leading the league with 5.5 average yards per carrying in the first 2 seasons.

In the 2nd week of the 2019 season, Jones rushed 23 times for 116 yards and 1 touchdown for a 21-16 victory over Minnesota Vikings. Later, he rushed 10 times for 19 yards and 2 touchdowns for a 27-16 victory against Denver Broncos. In the 5th week, the Packers enjoyed a victory of 34-24, in which Jones finished with 107 rushing yards, 75 receiving yards, and 4 touchdowns against the Dallas Cowboys, which also got him the title of NFC Offensive Player of the Week. In the 8th week, a victory against Kansas City Chiefs for 31-24, Jones finished with 13 carries for 67 rushing yards, 7 catches for 159 receiving yards, and 2 touchdowns during the Sunday Night Football match.

His performance in this match earned him an NFC Offensive Player of the Week title. Against Carolina Panthers in the 10th week, Jones rushed 13 times for 93 yards and 3 touchdowns resulting in a 24-16 victory for Packers. Jumping to the 14th week of the season, Jones rushed 16 times for 134 yards and a touchdown for a 23-10 victory over Washington Redskins. During Monday Night Football, in a match against Minnesota Vikings, Jones emphasized a big-play of 56 yards touchdown run in the 16th week. He concluded that match with 154 rushing yards and two touchdowns on 23 rushes with a win of 23-10.

In the 17th week against Detroit Lions, he rushed 25 times for 100 yards and caught two passes for 43 yards in the 23–20 win. In that game, he played a career-high 75 snaps and surpassed 1,000 rushing yards for the first time in his career. He had a total of 285 touches, 1,084 rushing yards, and 16 rushing touchdowns to go along with 49 receptions for 474 receiving yards and three receiving touchdowns in the 2019 season. In the 28-23 win in the Divisional Round of the playoffs against the Seattle Seahawks, he rushed 21 times for 62 yards and two touchdowns.

Aaron is reportedly dating a girl named Crystal Molina. It is believed that they might have started dating somewhere around the month of August during the year 2018. The couple is currently expecting their first baby along with their family members. Other than that he had to face some legal trouble during 2017. On 1st October 2017, he was quoted for a traffic stop when he was speeding at 79 MPH at a 55 MPH speed limit along with having possession of Marijuana. He was charged fines for court costs and his license got suspended for 6 months for operating with a restricted controlled substance, operating without a valid license, and speeding.