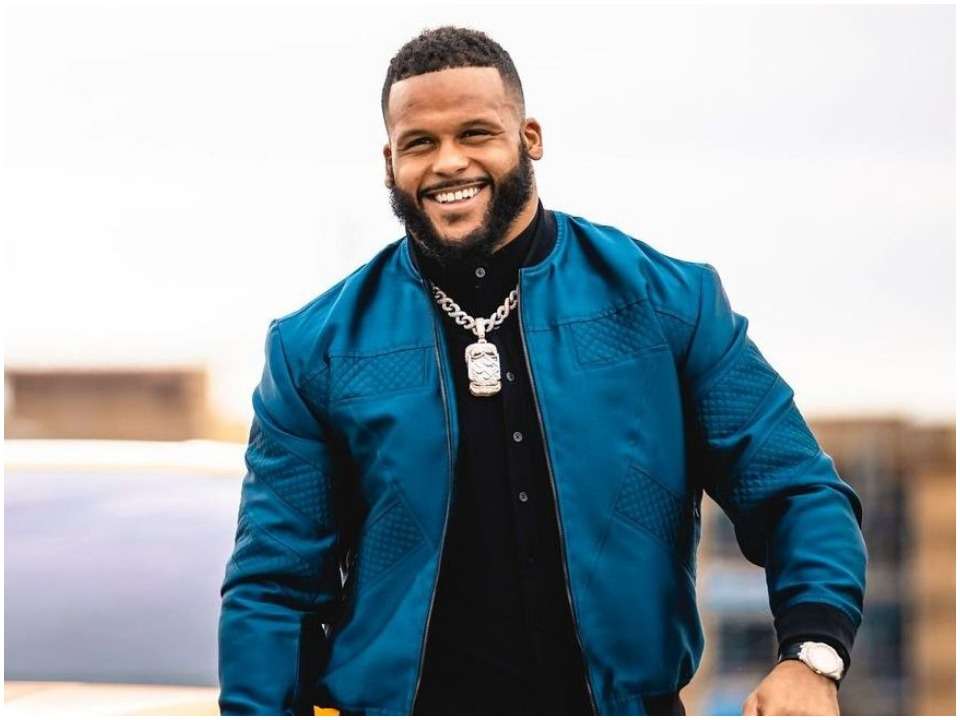 Aaron Donald is one of the best Defensive Tackle in the pro scene who is playing for the St. Louis Rams. As of now, he has scored 441 Tackles, 98 Sacks, 23 forced fumbles, 6 fumble recoveries, and 16 pass deflections. He has also set a record for a 40-yard dash in the NFL draft which was previously set by Tank Johnson.

Aaron Donald was born on 23rd May 1991 in Pittsburgh, Pennsylvania, United States of America. The names of his parents are Anita Goggins and Archie Donald. He has not shared details about his siblings with the media. At the age of 12, his father used to work out as he was a lazy kid. Aaron went to Penn Hills High School over there he studied and played football. Later he received college scholarship offers from Toledo, Akron, and Rutgers. He decided to play with the University of Pittsburgh.

Aaron began his career in football in his high school he used to play as an offensive guard. Later he played at college and had a total score of 179 tackles, 66 for loss, and 29.5 sacks. He was honored with many awards like Lombardi Award, Bronko Nagurski Trophy, Chuck Bednarik Trophy, and Outland Trophy. He was drafted by St. Louis Rams in the first round with the 13th Overall pick in the 2014 NFL draft. On 7th September 2014, he made his regular-season debut against Minnesota Vikings. He also played matches against Tampa Bay Buccaneers, San Francisco 49ers, and many more.

In 2018 he signed another contract extension for 6 years with the Rams. He has played various matches against Chicago Bears, San Francisco 49ers, Arizona Cardinals, Dallas Cowboys, New England Patriots, and other teams. Along with he also was honored with NFC Defensive Player of the Week, NFL Top 100 players of 2019, and others. In 2019, 2020, and 2021 he was seen playing against various teams. He was seen against Green Bay Packers, Arizona Cardinals, Miami Dolphins, Seattle Seahawks, Buffalo Bills, Dallas Cowboys, and other teams.

In 2016 he was ejected for making an illegal contract with the referee during the San Francisco 49ers match on Monday Night Football. He was later fined a total of $21,269 for unnecessary roughness and unsportsmanlike conduct. On 21st October 2016, he was again fined worth $18,231 for unsportsmanlike conduct after committing a penalty during a match. In 2017 after the extension of the contract he did not report to training camp and preseason due to an extension dispute. His fines were accumulated to $1.4 million due to his nonparticipation in each game. In 2021 he was again fined $10300 for his rude behavior in a match against Green Bay Packers where he choked offensive lineman Lucas Patrick.

Aaron Donald is engaged to Erica Sherman who is also his marketing manager. Erica has previously worked with Los Angeles Ram and is Vice President of Athlete Partnerships for game 1. The couple likes to spend quality time together and away from the limelight.

Aaron Donald has earned a lot from his career as a footballer. In 2014 he signed a 4-year contract worth $10.13 million rookie contract including a $5.69 million signing bonus. Later in 2018, he signed a 6th-year contract extension worth $135 million with $87 million guaranteed. According to sources his net worth has been estimated at around $60 million.