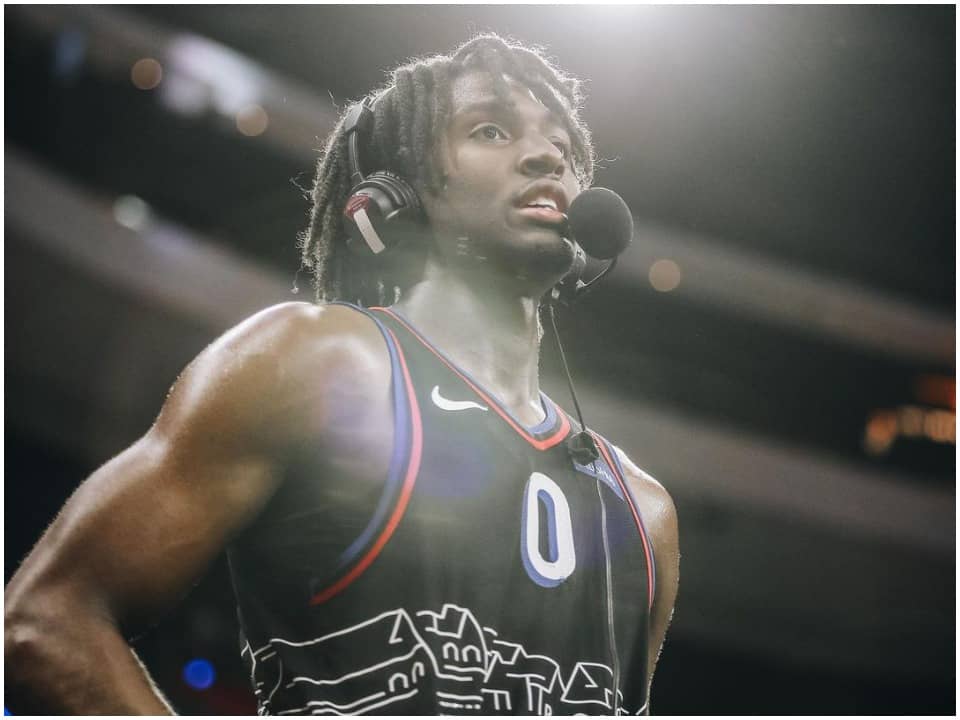 Tyrese Maxey is an American Professional Basketball player who plays at the shooting guard position for the Philadelphia 76ers at National Basketball Association. He has a successful college basketball career and was picked at the 2020 NBA draft in 21st overall.

Tyrese was born on 4th November 2000 in Dallas Texas, the USA in a Christian family and is an African-American. He has been playing basketball since he was a kid and has always been sporty. Tyrese has not shared much about his parents and family but it is known that his father’s name is Tyrone and he was the Director of Recruiting at the SMU Mustang Men’s Basketball season in 2017 while his mother’s name is Denise Maxey. He is also known to have three sibling sisters named Denasia, Talia, and Keiar and he is currently 20 years old.

Tyrese has not shared much about his early education but it is known that he has been playing basketball at the middle school level. He graduated from South Garland High school where he also played high school basketball. Tyrese later joined the University of Kentucky in 2019 for his college studies and to continue college basketball. He joined college to study Exploratory studies in communication but did not complete his college.

Tyrese has a flourishing high school basketball career as part of the team of the University of Kentucky. In his junior year, he set a record of 22.5 average points and 3.1 assists which led his team to score36-4 record. Then again in his senior year, he scored an average of 22.2 points with 3.6 assists which led the team to set yet another record. He acted as a catalyst for the team throughout his high school career and at the season end, he was given a 5-star rating as a recruit by Rivals, 246 sports as well as ESPN.

Tyrese went on to join the Wildcats at Kentucky and in his very first season, he scored 26points which led the team to secure a win against the number one team Michigan state. He was named the SEC All-Freshman team. The following year, he did not participate in the college sport but instead went on to participate in the 2020 overall NBA draft. He also became the Second All team SEC in 2020. Tyrese is known to have played with the United States U-18 team at the 2018 FIBA U-18 American Championship and won a gold medal with the team.

He was recruited by the Philadelphia 76er in the 21st overall draft and in 2020-2021, he started his very first season as a professional player on the shooting guard position. Tyrese scored a high of 39 points against the Denver Nuggets which was the highest score by an NBA rookie since 1970. He had excellent offense skills and shooting but due to lack of experience at the NBA, he has little playtime. He practiced and trained on his weak points and gaining skills and eventually his minutes started increasing along with his average.

Tyrese is highly active on social media platforms and currently, on his Instagram account he has a following of 257k followers where he likes to post about his outfits and airport looks, snippets from his games, travel experiences and photoshoots, etc. he also has a Twitter account since 2019 where he currently has 63.9k followers. He also has a YouTube channel where he has a total of 2.09k subscribers.

Tyrese has not shared much about his personal life and relationships but it is believed that he is currently single. He had earlier posted pictures with his prom date who might be his girlfriend but there is no sure information available about it. He is known to be a fashionista and is often seen sporting branded and unique outfits and styles.

Tyrese has just started his professional basketball career and has been earning loads of wealth through his profession. According to Forbes, his team is valued at a total of $2billion which makes his own wealth none less than a million or two. Although his exact net worth is yet unknown, he is known to own luxury cars and branded clothes while living a lavish lifestyle.