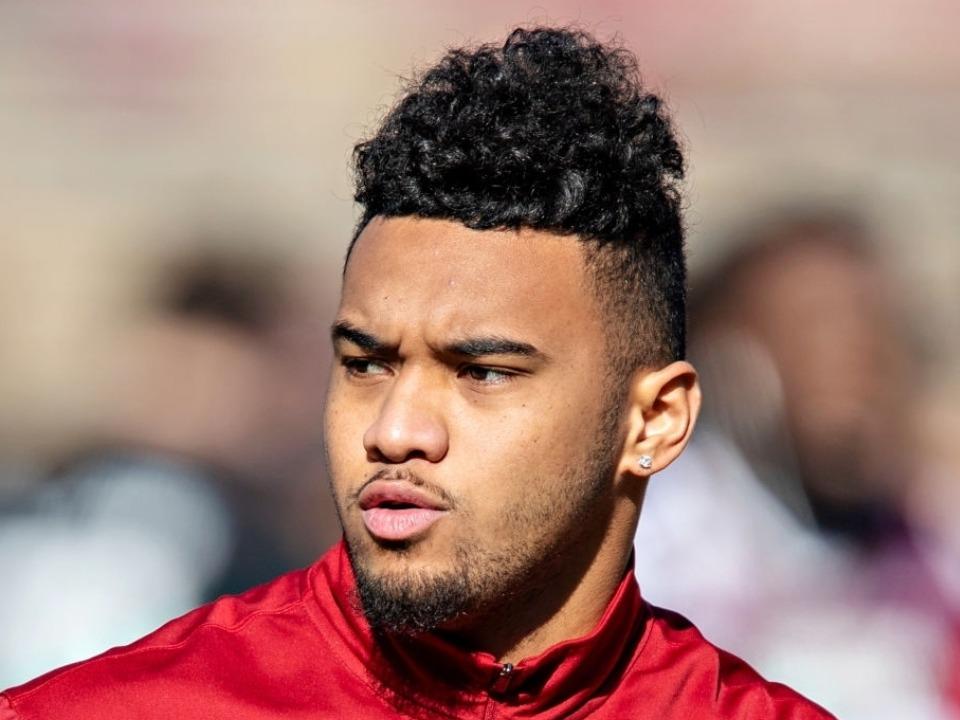 Tua Tagovailoa is an NFL Quarterback currently playing at position one from the Miami Dolphins, the team that drafted him overall fifth. He has struggled through many injuries and even two surgeries along with winning hearts and games while leading Crimson Tide to victories. Tua is a left-handed quarterback despite being right-handed, a trait he learned from his father when he was young. He has won numerous awards and has surpassed Baker Mayfield’s record too. He is turning his grandfather Seu’s dream into reality by being one step closer to be a football star as Seu wanted him to be.

Tua Tagovailoa was born on the 4th of March, 1998 in Ewa Beach, Hawaii. His parents are Galu and Diane Tagovailoa and he is the oldest of four children in a Samoan family. He has grown up with an extreme interest in football with his family. He is so in love with the sport that he would sleep with a football under his arm every night as a small child. When he was eight years old, during Pop Warner games when his classmates could usually throw a football little more than 10 yards, he consistently threw passes more than 30 yards. He sees his grandfather as his prime inspiration, Seu Tagovailoa who was often addressed as “Chief Tagovailoa” and was greatly respected in the Samoan community.

Seu had faith that Tua would become a great football star. After every game, Tua would go to him to report him about the game no matter what time it was. Unfortunately in mid-2014, Seu passed away due to which Tua thought of quitting football for a short time until he realized that the best way to honor him was to continue his game. His father disciplined him very much for his game that when he threw an interception his father would use a belt, but this strictness is the reason he is so good at his game. Tagovailoa’s younger brother, Taulia, is also a footballer. He went to Saint Louis School in Honolulu and later attended the University of Alabama to play college football.

Tua threw for 33 passing touchdowns during his first season with three interceptions and 2583 passing yards, in his varsity football team during high school. He threw for 2669 passing yards with 27 passing touchdowns and 7 interceptions in his regular-season during 2016, when he played in All-American Bowl. Tua was picked to be in the Elite 11 roster as one of the top high school quarterbacks in the nation, where he was named MVP of that roster. He was ranked the top high school prospect in the state of Hawaii when he was considered a four-star recruit in the recruiting cycle of 2017.  In 2017, during the month of January, he had offers from various colleges to play on a college football scholarship, including UCLA Oregon, and Colorado, but he chose to enroll in the University of Alabama.

In 2017, he was a backup to sophomore quarterback Jaden Hurts throughout the season as a freshman. Due to a couple of blowouts victories for the Crimson Tide, he got noteworthy playing time as an experience. A home game against Fresno State was his collegiate debut game played at Bryant-Denny Stadium. He ended 6-of-9 for 64 yards in a victory of 41-10. His first career passing touchdown was a 16-yard pass to wide receiver Henry Ruggs III. Another playing time h got was the victory of 59-0, against Vanderbilt, which recorded 103 passing yards and two passing touchdowns. The next game was beside SEC West rival Ole Miss, in which his first collegiate rushing touchdown in a 66–3 victory was recorded.

He concluded with 134 passing yards, one passing touchdown, one interception, and one rushing touchdown in a victory for 45-7 against Tennessee in the annual rivalry game. Another game was against Mercer, in which he threw for three passing touchdowns in the 56–0 victory. Due to ineffective play by Hurts in January 2018, he replaced him in the second half of the 2018 College Football Playoff National Championship. A game-winning 41-yard touchdown pass was thrown by him in overtime to another true freshman, wide receiver DeVonta Smith as the Crimson Tide defeated the Georgia Bulldogs, with a victory of 26-23 and winning their 17th National Championship. He finished the game 14-of-24 for 166 passing yards, three passing touchdowns, and one interception, along with 27 rushing yards on 12 attempts. Tua was termed the Offensive MVP of the game.

He made his first career start at the season’s opening game, besides Louisville, in Orlando, Florida during 2018 on the 1st of September. He finished 12-of-16, with 227 passing yards and two touchdowns in the 51–14 victory, before he got replaced by Jalen Hurts in the third quarter.  Following the victory, Alabama’s head coach Nick Saban in his weekly Monday press conference announced Tua as the starter for The Crimson Tide’s home opener alongside Arkansas State on the 8th of September.

Following the regular season, he got second in the Heisman Trophy voting to Oklahoma quarterback Kyler Murray, but he won the Walter Camp Award and Maxwell Award for 2018, both awarded to the top player in college football. Tua put on an almost perfect aggressive performance against Oklahoma in the 2018 Orange Bowl to lead the Tide to their fourth consecutive CFP National Championship appearance, while he was still recovering from the high ankle sprain he suffered during the SEC Championship against Georgia.

In the 2018 National Championship, they lost against Clemson (44-16), in which he went 22-of-34 with 295 passing yards, two touchdowns, and two interceptions. He made a new NCAA FBS passer rating record of 199.4 for that season, which broke Baker Mayfield’s record of 198.9 set by him in 2017. Tua began his junior season with a victory at the Chick-fil-A Kickoff Game besides Duke in Atlanta. He concluded with 26-of-31 with 336 passing yards, four touchdowns, and no interceptions before, he refrained to participate in the fourth quarter. The following game of the season was a home opener victory against New Mexico State.

Tua got invited to the NFL Combine, but couldn’t participate in any of the drills as he wasn’t recovered properly from his injuries. He was going to play on his pro day in the month of April, which unfortunately got terminated due to the ongoing pandemic. He was the fifth overall pick as drafted by the Miami Dolphins in a virtually held draft along with other 57 players being invited too. His college jersey number 13 was retired in the honor of Dan Marino, Tua then chose to wear the number 1. Tua signed his four-year rookie contract on the 11th of May, 2020 which is worth US$30 million. He was named as a backup for Ryan Fitzpatrick in the current season after he passed his physical with his team in July 2020 to begin the training camp.

Tua Tagovailoa hasn’t opened about his love life currently in the public domain, but the NFL Quarterback is reportedly still single. He had mentioned that he might need a girlfriend a while ago, but are still to hear from him.

Tua Tagovailoa is a great football player who has won numerous awards and has broken several records in terms of his game. He has an immense net worth of $1 million currently.