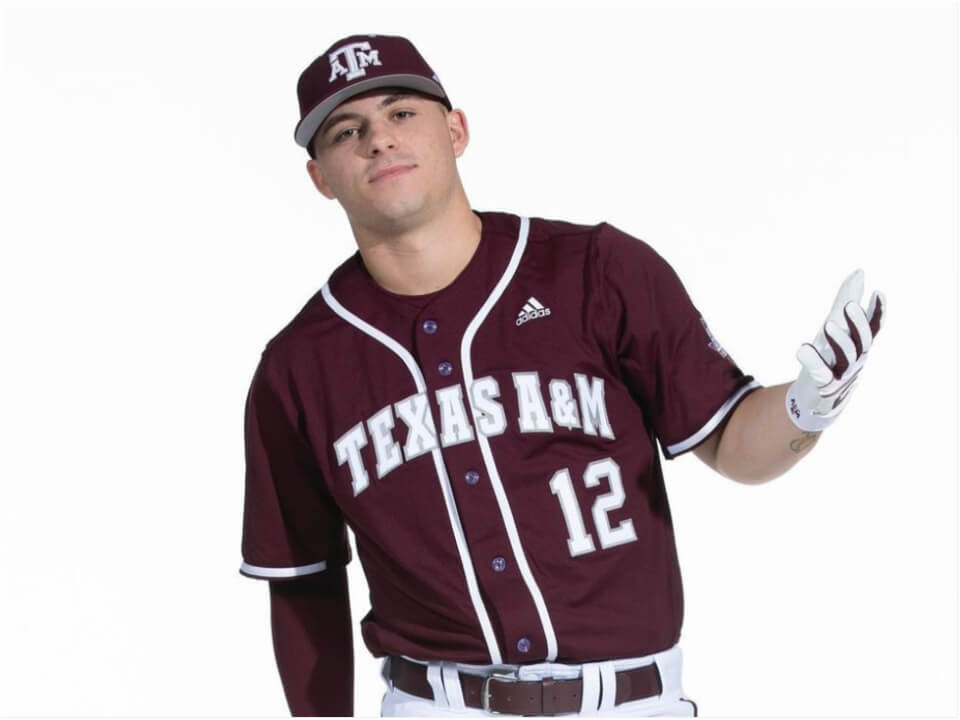 Troy Claunch is an American personality who is a graduate student having his current collegiate year with Texas A7M University and has remained a student-athlete of the Oregon State. He played baseball as the Catcher, First Baseman, and Right Fielder. He throws the ball with his right hand and is also a right-handed batsman. During his last year of Oregon State, he decided to transfer from his pursuing college to Texas A&M University.

Troy Claunch was born on 1st September 1998 and grew up in Fairfield, California. He is 24 years old graduate personality who has remained a student-athlete at the Oregon State University and later had the transfer his college from Oregon State to the Texas A&M University. Back in 2021, he announced that he would be using his final year to play for the Aggies for college eligibility. The announcement came after the issues because of the academic reasons not with the coach Mitch Canham and the things surrounding Beavers Baseball. Most recently (as of April 2022), Troy is pursuing his master’s from Texas A&M University majoring in Real Estate.

Troy is the son of his loving and caring parents named Laurie Audiffred and Stan Claunch. He shared his childhood with his loving sister named Jenna. Troy is the kind of personality who is an avid lover of snowboarding in his spare time. He aspired to become a firefighter after completing his collegiate career in baseball. He says that you have to work together not just to win the game but to save lives and have to perform like a team in sports. During the early years of his college selection, he chose Oregon State because of the persistent winning history and having the chance to win with the community support and the electric atmosphere.

During his high school season at Vacaville High School, Troy was guided by coach Stu Clary and earned the name of four-year letter winner, and also served as the captain during the three seasons. While playing as a senior for the high school in 2017, he batted with a .318 average and 4 doubles, 1 home run, and 11 RBIs. While playing in the year 2016, he made the career record of .316 batting averages with 5 doubles and 1 triple and had 21 RBI. During another game in 2015, he made the record-making scores of .489 batting average, 8 doubles, 2 triples, 1 home run, and 29 RBIs.

Back in 2014, he earned the honor of all-league first team on two occasions and played in the USA and had 10 RBI with 2 home runs, 6 doubles, and a hit of .421 batting averages. During the baseball seasons in high school, Troy earned the honor of being named First-Team All-League twice and also showed his presence for the USA Tournament of Stars. Troy spent most of his collegiate baseball years including 2018 (Freshman), 2019 (Sophomore), 2020 (Junior), and 2021 (Junior) with Oregon State

During his graduate year with Texas A&M University, he appeared for 48 games out of which he had 47 starts. He made the record of .299 batting averages and went 55-for-184 with 35 runs, 3 home runs, 13 doubles, 41 RBIs, and 18 walks while playing for the whole season. While playing the first game of the Kentucky series, he made a walk-off home run with the victory in hand for the whole team. He had a batting average of .500 and went 6-for-12 in Alabama Series where he earned 4 and a double run. While playing at LSU, he made the average batting run of .500 with an RBI. He had another batting average of .500 while playing for the Santa Clara Series on 12/3 and 13/3 where he earned the 4 runs together with 2 RBIs and a double.

Troy Claunch has shared several pics of him with a girl Ciera Hecht who is his sweetheart. Ciera is also a student of Texas A&M University and she is a member of the college volleyball team. On the other hand, Ciera has shared pictures of recent matches where she has been seen sharing hugs with Troy and congratulating him.

For the moment, there is only available information on Troy’s accolades and awards he earned throughout his career at his high school, Oregon State, and Texas A&M University. He has remained a student-athlete for Oregon State and is currently pursuing his master’s at Texas A&M University. He earned the honor of being named on the Frisco Classic All-Tournament Team after he batted with an average of .364 and went 4-for-11 along with one RBI, 2 doubles, and a run on the weekend (4/3/2022 to 6/3/2022).