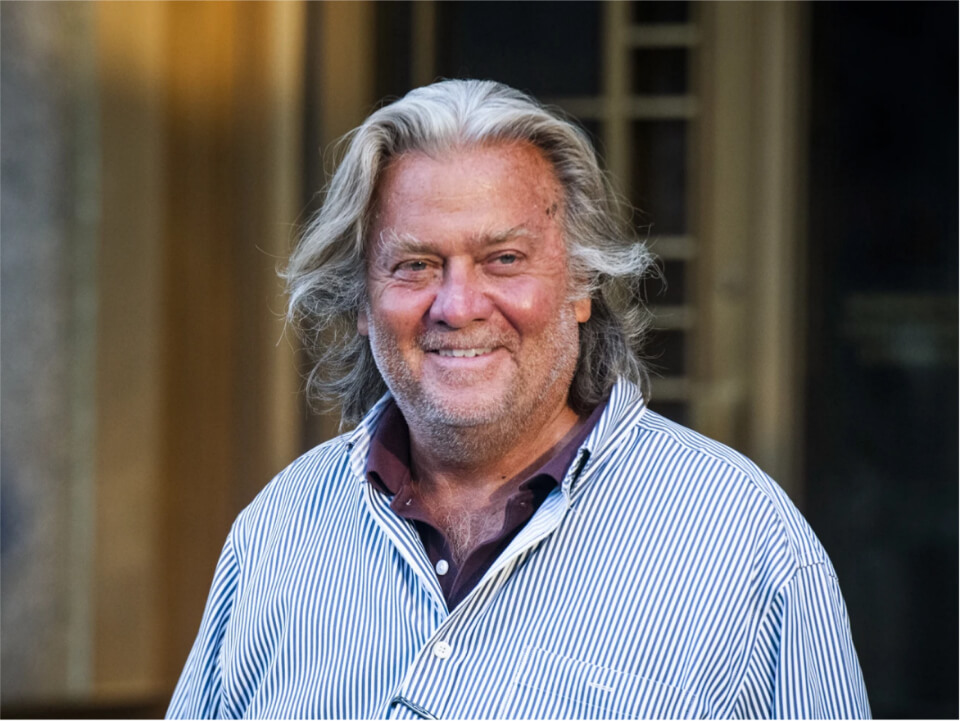 Steve Bannon is an American personality, media executive, political strategist, and former investment banker, and served the white house during President Trump’s administration as chief strategist for the early 7 months of Trump’s term. He has also worked as the former executive chairman of Breitbart News and served the board of firm Cambridge Analytica. On 11th July 2022, Bannon was undertaken by the testifying committee for proceeding with the investigations of the 6th January Capitol Riot. He agreed that he would be ready to pursue investigations anytime. The investigation team reports that Bannon could have liable information for the day of the riot and the Trumps decision over the matter of changing the results of the elections.

Steve Bannon was born on 27th November 1953, making him 69 years old as of 2022. He was brought up in Norfolk, Virginia to his parents named Doris (née Herr), who was the homemaker, and Martin J. Bannon Jr. (father) who worked as an AT&T telephone lineman and as a middle manager. He belonged of Irish and German descent. Most of the family members of his mother’s side were settled in the Baltimore Area. Bannon went to a private military catholic high school named Benedictine College Preparatory in 1971 and later went to Virginia Tech.

He was given the honor of serving as the president of the student government association. During the summers, he used to work at the local junkyard. Bannon went to Virginia Tech College of Architecture and Urban Studies in 1976 and received his degree in urban planning. He served a few years in the navy and earned a master’s degree in the subject of national security in 1983 from Georgetown University School of Foreign Service. In 1985, he earned another degree of masters in Business Administration with honors from Harvard Business School.

Bannon worked as an officer for the early 7 years in the later 1970 until 1980 in the United States Navy. After completing his military services, he worked for two years at Goldman Sachs in the position of an investment banker. In 1993, he worked as the acting director of the research project named Biosphere 2. Between 1991 to 2016, he worked as an executive producer in Hollywood and worked on 18 film projects. Later in 2007, he co-founded a website named Breitbart News, which he described as the platform for the “alt-right” in 2016. In 2016, Bannon became the chief executive officer of Trump’s 2016 Presidential Campaign.

He was given the position of chief strategist and senior counselor to the president after the elections. He worked in the position for a total of 8 months and later left the work and rejoined his self-funded website, Breitbart. In January 2018, Steve Bannon was disavowed by Trump after he passed critically viewed comments in the book Fire and Fury and left Breitbard. In August 2020, Bannon and his other three companions were arrested on the charge of conspiracy and committing mail fraud or money laundering with connection to the “we build the wall” campaign. Bannon was found not guilty and was later pardoned by then-President Donald Trump before his trial in court.

Steve Bannon married thrice in his whole life and was later divorced by all women who entered his life. First, he married a woman named Cathleen Suzanne Houff and produced a daughter named Maureen in 1988, and later divorced. Then for the second time, he married Mary Louise Piccard, who was then an investment banker. The couple exchanged the rituals of marriage in April 1995. After three days of marriage, Piccard gave birth to twin daughters. In 1997, Piccard filed for dissolution of their marriage.

She produced changes on Bannon in the category of domestic violence and battery and domestic abuse after which the court found “dissuading a witness case” in early January 1996. During the time, it was reported by the police department that when Piccard called 911 and when the police arrived home address, they observed marks on her wrist and neck. But, all the charges from the side of Piccard were dropped after she did not appear in front of the court. Thereafter, Bannon had her third marriage with Diane Clohesy in 2006 and later the pair got divorced in 2009.

According to Forbes Magazine, Steve Bannon is known to have a net worth of $48 million. He is holding different professions in the line of politics, film production, business, and military.