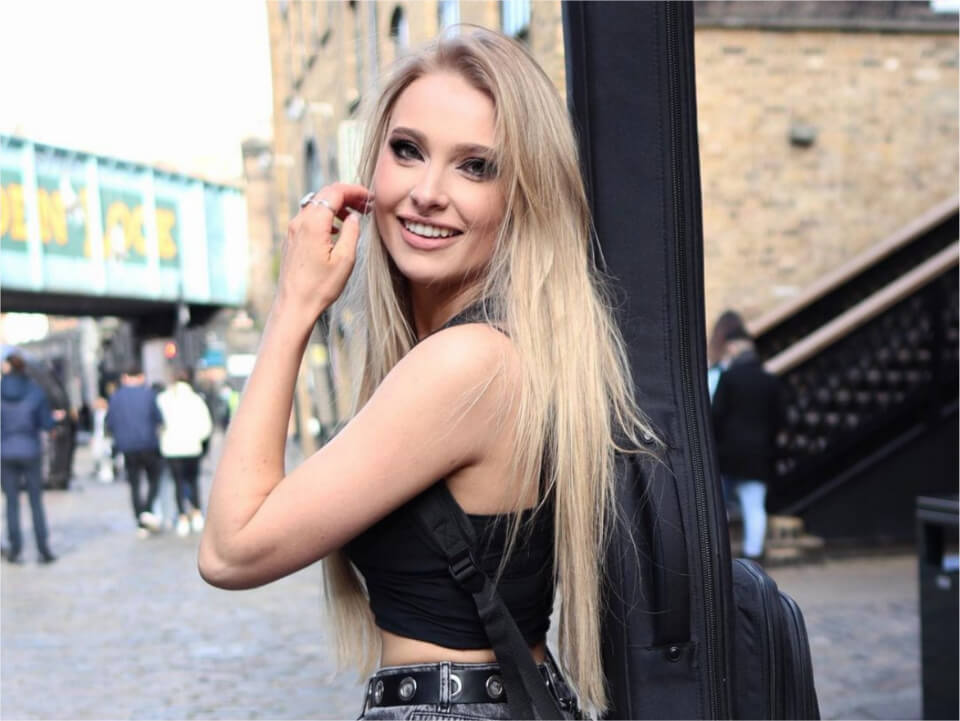 Sophie Lloyd is an American personality famously known as a guitarist, social media content creator, and kind of person who is obsessed with rock music and rock guitar tunes. She has developed her roots in metal, and bands like Black Label Society, Iron Maiden, and Pantera, which all have been the biggest influencing bands in her life with the expression and feeling of blues guitarists. Sophie loves to play the rhythms and is greatly inspired to produce punk bands such as Offspring and Misfits.

She has learned different genres of guitars including elements like Jazz, Country, and Gospel. She has developed herself with a unique and creative style of playing and comprising the guitar tunes with passionate and inspired work. You will find all of her tunes to be cheerful, composed, energizing, and well-developed to touch the hearts. Back in May 2022, Sophie was in the news because she was appointed by Machine Gun Kelly as the new guitarist for his touring band.

Sophie Lloyd was born on 2nd September 1996 in London, the United Kingdom with her roots belonging to a British family. From her infancy stage, she used to find herself connected with music and creating tunes for the people who could praise the same. She joined a school for her primary education, where she found herself connected with guitar and other instruments and began working for her passion at the age of 9. Later in life, she joined BIMM London, from where she completed her graduation in BMus, with a touch of creativity in popular music performance. She completed her graduation from BIMM London with first-class honors.

Sophie Lloyd is fond of rock and punk music tones which she has been practicing since the age of 9 when she first decided to pursue her career in music only and became a professional in the same field. While growing up, she used to listen to the music of the 60s and a few of the famous artists of that time including Jimmy Page, Albert Lee, Iron Maiden, Black Label Society, Joe Bonamassa, and others.

During her initial years of seeking education at BIMM London, she amazed the people with her different forms of genres of music and their varieties including Jazz, Country, and Gospel. She made her debut back in 2018 and released her EP with the title Delusions, with the help of the producer Jason Wilson- the producer of Stakeout Studios. The EP she released became one of the biggest commercial successes of the time, crossing more than millions of views on different social media platforms including Facebook, YouTube, Twitter, and Instagram. She has collaborated and worked with other popular musicians like Mike Hurst, Clem Clempson, and Fleur East.

Besides having individual success in her professional life, she also features her work on her YouTube channel, which she started back in September 2011. Today, the channel has got millions of subscribers, and where she often used to post music, covers, songs, guitar lessons, lifestyle vlogs, and other music-related content. She uploaded her debut video on her YouTube Channel on 9th August 2012 with the title Black Veil Brides- Knives and Pens (Guitar Cover). One of the most popular videos that gathered more than millions of views and subscribers was her new update titled “After Insanity (Original Song)”.

She is a famous social media influencer and has accumulated millions of followers on her TikTok account, YouTube Channel, Instagram, and Facebook, where she often posts videos related to lip-sync, pranks, dance, music covers, and other fabulous, countable or talented content. She has got herself published in various magazines and newspapers, creating a buzz in the market of music or the music industry about her name.

Sophie Lloyd has not been committed to anyone romantically. Also, she has not revealed any details regarding her past romantic relationships. She is yet to be 26 years old as of 2022 and is smart and mature enough to understand the importance of revealing truths in the industry. Sophie is best known for her music and her style of playing tunes on guitar. She is the star of a new generation of guitarists, especially in the society of women.

It is for sure that Sophie Lloyd is earning a good income because of her only profession as a guitarist. Despite being a guitarist, she is a social media influencer, a YouTuber, a lesson teacher, and a famous social media personality. Surely, she must be earning somewhere around $2 million as her total or estimated net worth that she must be getting from her work of art.