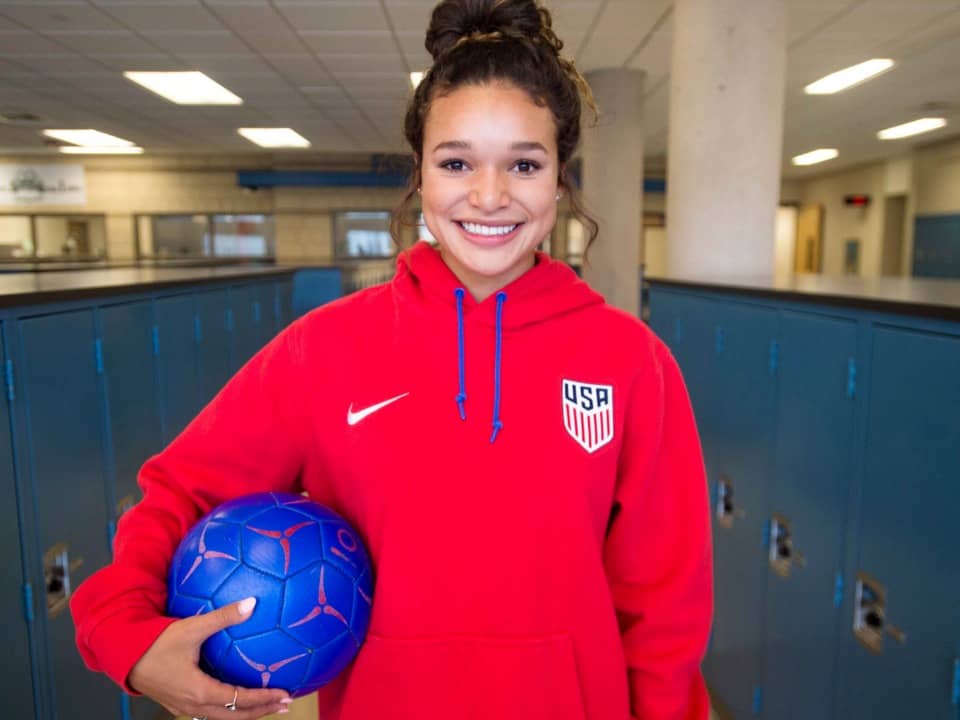 Sophia Smith is an American Soccer Player playing for the National Women’s Soccer League Team – Portland Thorns FC. She is given the Forward post and plays wonderfully. In 2021, she was sighted in the She Believes Cup match.

Sophia Smith was born on 10th August 2000 in Windsor, Colorado, United States of America. Her parents are Mollie Smith and Kenny Smith. She is the youngest sister of the three and the names of her elder sisters are Gabrielle and Savannah. Sophia loves playing sports and enjoyed every moment she spent with her family. She broke her family legacy by playing soccer instead of basketball. Sophia has attended Fossil Ridge High School located in Fort Collins, Colorado. There she played Soccer for her school team and at the same time was pursuing her high school education. Furthermore, she went to Stanford University for her higher studies.

Sophia started her career in the field of soccer as a sport. At high school, she was named as First Team All-Conference in her freshman year. In 2018, she played for her college team. She scored 7 goals that season and 17 in the following season. Next year she was seen at the 2019 College Cup where she scored a hat trick and defeated UCLA in Semifinal. Her team later won the National Title via penalty shootout in the finale. In 2017 she was seen at the U.S. Youth Women’s National Team. In that game, she scored 9 goals in six back-to-back matches.

On 31st March of the same year, she was called for the first time to play for the Senior U.S. National Team. She was named to the USA U-20 roster for the 2018 FIFA U-20 Women’s World Cup. In 2020 she was called for the Senior National Team first training batch after having been called into a Talent Identification Camp in December 2019. On 16th January 2020, she went for the NWSL draft and was selected with the #1 pick by the Portland Thorns FC.

Sophia is currently in a relationship with Michael Wilson. Michael is a wide receiver at Stanford University. They both met in the same university and started dating as they went out casually. It’s been a year since they started dating each other. They usually upload their cute and cozy couple of pictures on their social media account.

Sophia Smith started as a soccer player and broke her family’s streak. She plays for a club and earns from the matches through prize money who made several goals for the team and made her way through. Her estimated salary has been around $459,420. According to our sources, her net worth has been estimated at around $1,495,000. She earns by brand endorsements from Nike and Hyperice; and by attending various events.