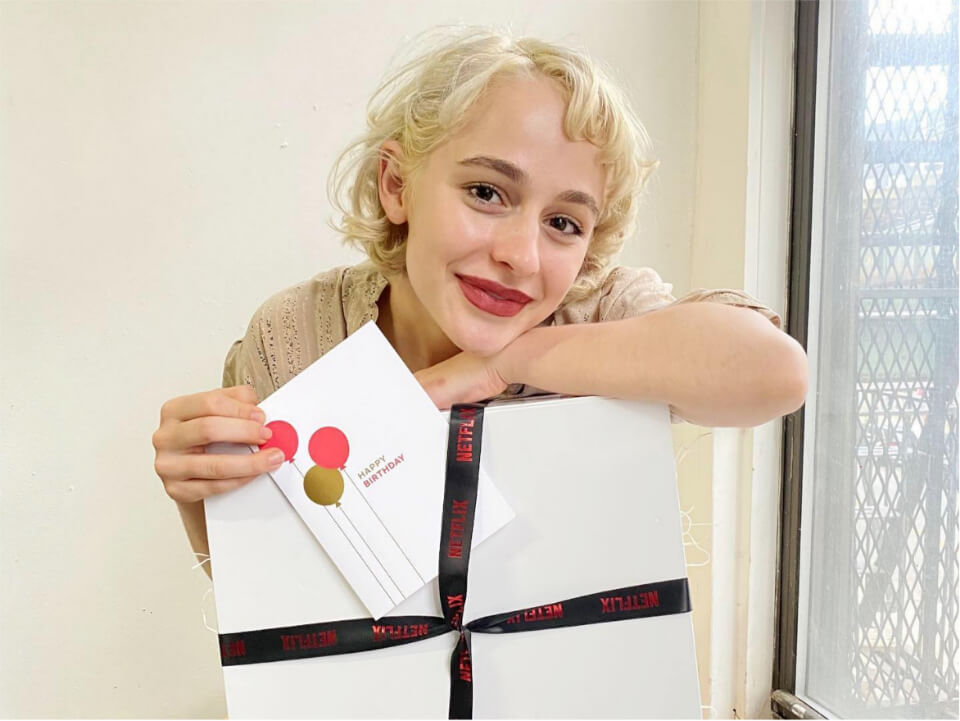 Sophia Anne Caruso is an American-born singer and actress. She came to the limelight with her emerging role of Lydia Deetz in the Broadway musical Beetlejuice, for which she also won a Theatre World Award. Despite this, she has also worked in other parts, including Girl in Lazarus (2015-17) and Iris in The Nether (2015). She is famously in the news as of October 2022 because of her new emerging role of Sophie, a young girl who wishes to escape her simple life to be a princess, in the Netflix film called The School for Good and Evil. Though she has already had a great fanbase, people are still excited to watch her and know more about her personality.

Caruso was born on 11th July 2001, making her 21 years old as of 2022. She and her family belong to Spokane, Washington, where her father, Steve Caruso, developed himself into a golfer (now a former golfer) and her mother, Deena Caruso, owns a clothing and jewelry store. Caruso has two elder siblings; since the age of seven, she has been involved in acting. She initially pursued her acting and theatre classes at the local Spokane Children’s Theatre before transitioning to other theatres named Spokane Civic Theatre and Interplayers Professional Theatre.

Caruso had her professional debut at the age of nine in 2011 when she played the role of Helen Keller in the production of The Miracle Worker (at the Interplayers Professional Theatre) in Spokane. She had her final role in Spokane as Tina Denmark in Ruthless! The Musical in the year 2012 in the interplayers theatre. But, the production never opened on the set because the actor David Gigler collapsed on stage while rehearsing before the opening and died at the moment. After that, in the same year, Caruso and her whole family went to New York so that she could pursue her professional career.

In 2014, Caruso got to reprise her role as Tina Denmark Ruthless! For a limited period at the Triad Theatre. The following month, she got another chance to play the role of Charlotte van Gotheem in Little Dancer at the Kennedy Center (Washington, D.C.). In 2015, Caruso appeared in an off-broadway play called The Nether at MCC Theatre, for which she also received a Lucille Lortel nomination in the category of “outstanding featured actress”. Later, she had her Broadway debut as The Girl in Blackbird at the Belasco Theatre. She appeared in the role of the Encores! That was performed at the concert production of Runaways at the New York City Center.

Then, in 2016, she reprised her role of Lazarus at the King’s Cross Theatre production, for which she received an award nomination from WhatsOnStage Awards. In 2017, she originated the role of Lydia Deetz in the musical Beetlejuice. Also, she received the chance to reprise the role in the musical’s tryout at the National Theatre – Washington, D.C. For the role, she also received Theatre World Award. On 19th February 2020, she left her role to pursue her career in films and big screens.

Caruso had her debut in the line of music with her singles called “Toys”, which was released on 22nd May 2020.

Caruso recently had her debut with featured roles in films on Netflix. She worked alongside Sofia Wylie in the fantasy film called The School for Good and Evil, which is, in reality, the adoption of the book series made by Soman Chainani.

Earlier, she showed her curiosity that she wanted to release an EP in the future, which she proved to be correct (though not with the EP she dreamed of). She recently released her single in July 2022, “Snow & Ice” and “Thing Like That” on 30th September 2022.

Sophia Anne Caruso is available on Instagram with her self-titled name. She has gathered around 153K followers and around 250 posts. Sophia has posted a lot of content related to her selfies, full-body photos, families and friends, and the photos of her new projects that she has worked on. She is well-versed with the fan following, and now, she is getting a good buzz on the internet with her new film on Netflix, The School for Good and Evil. in April 2022, Caruso revealed her picture on Instagram with brown hair and captioned the image as “back to my roots”.

Sophia Anne Caruso is not known to be dating anyone in the industry. She is not in any controversy stating her relationship with any boy, actor, or actress.

Sophia Anne Caruso has always worked hard, showing her curiosity for theatres, television and films. She is undoubtedly earning a good income because of her image on the big and small screens. She is estimated to make a net worth of around $1.5 million.