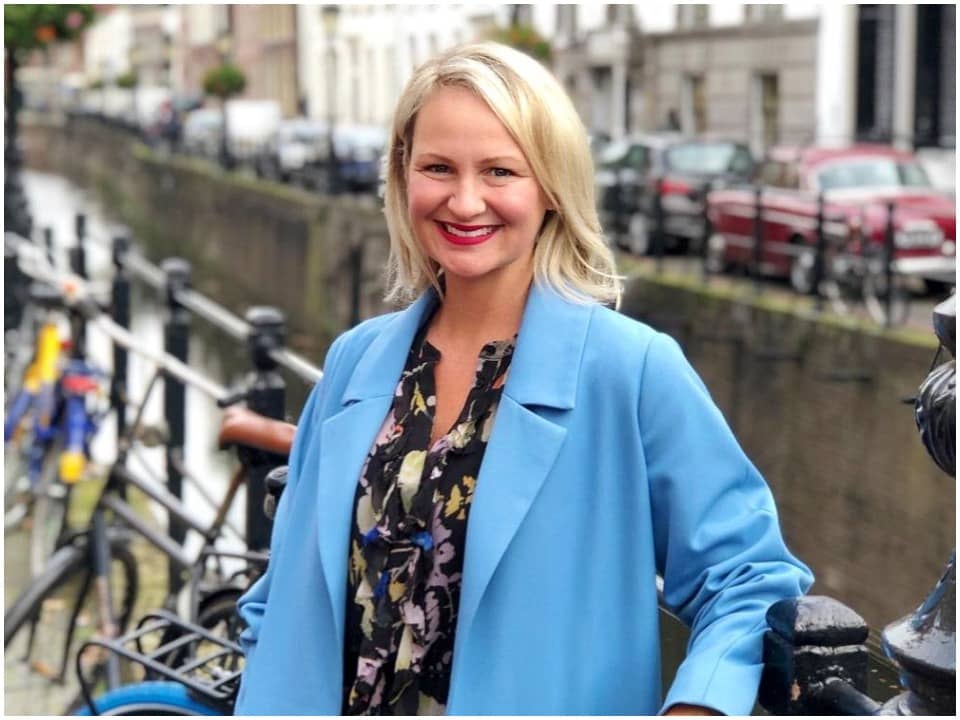 Sarah Eggar is a celebrity Real Estate Sales Consultant and Theater Actor. She is popularly known for appearing on an HGTV show named House Hunters International. Recently she was seen working as a property consultant in the Netherlands with Grove City natives Elena and Tyler Perrine who were finding an apartment in Amsterdam. On her Instagram, she posted a picture and made it official about filming for the new episode of House Hunters International with Jennifer and Dogan.

Talking about her age then she must be in her 40s as of 2021. She has not shared details about her birth date and place. The details about her parents and siblings have been kept private and away from the limelight. Sarah went to Valley High school and graduated in 1997. For her higher and further education, she enrolled herself at Liberty University. Over there she earned a Bachelor of Arts in English. She also went to William Esper Studio and is a graduate of their 2 years Acting Program.

Sarah began her career in the field of property and acting as well. In 2008 she was working as Director of Sales and Real Estate at My Resort Network.  Later in 2021, she was hired as Real Estate Salesperson for Christie Property Group, LLC. In December 2012 she began working for Home New York as Real Estates Sales Person. She is specialized in Luxury Rentals and Sales in Battery Park, Tribeca, Soho, and other financial districts. Also, she works as a 24/7 agent to ensure that her client can find the best possible place which they can call home.

She was also seen on the HGTV series named House Hunters International. Apart from working as a real estate salesperson, she was also seen in various acting roles. The films in which she worked are named Synthetic as Head Zombie for UF Grand Film and It’s a Wonderful Life as Violet Bick for Ellen Frattino/Ted Lewis, Van York Theater. She was also seen in various theatre projects named Closer, Rosencrantz and Guildenstern are Dead, Romeo and Juliet, Singing in the Rain, Falsettos, Guys and Dolls, and Macbeth.

Sarah is an active user of social media. She is known for posting content relating to her filming, work, family, and friends. On her Instagram account, she has earned 4,532 followers and 884 followers. She joined Twitter in January 2014. On Twitter, she has earned 205 followers with 46 following.

Sarah Eggar is married to a French man named Dragan Konsanovic. They met in New York City in June of 2013 at Conrad Hotel in BPC. Since then they have been together. They tied their knot in a private wedding ceremony. By looking at her Instagram profile she is 12 weeks pregnant with a baby girl.

Sarah Eggar must have earned a lot by working as a Real Estate Salesperson. She also appeared in theatre projects and other acting projects. According to sources the details about her net worth have not been shared with the media yet. She also earns from brand endorsements and by attending various events.