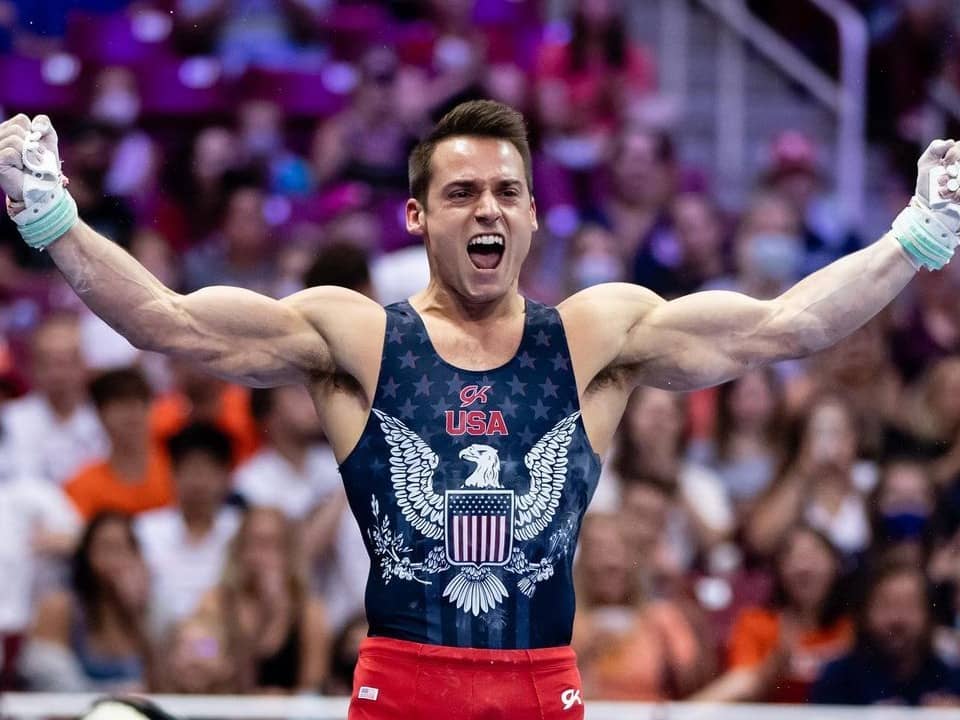 Sam Mikulak is a high professional American artistic gymnast who has won several accolades and named numerous accomplishments. He represented the United States at both the 2012 London Games end the 2016 Rio games. Sam belongs to a sports background as some of his family members are related to sports. He is a well-trained expert, who is well set to compete at the 2020 Olympic Games, where he is expected to give his tremendous performance as it is his 3rd Olympic appearance.

Samuel Anthony Mikulak popularly known as Sam was born on 13th October 1992 in corona Del Mar, California. His hometown is Newport Coast, California, where he spent his childhood days exploring and discovering new things. Hey currently recite in Colorado Springs, Colorado. He is a son to father, Stephen Mikulak and mother, Tina Mikulak. His father is an orthopedic surgeon while his mother is a gym coach at SCATS. His parents were participants in Gymnastics at the University of California, Berkeley. He grew up alongside his sister namely, Alexandra Mikulak, who started gymnastics at a young age but stopped eventually.

In his leisure, he enjoys longboarding, beatboxing, skeet shooting, and playing tennis, soccer, football, and golf. Sam refers to Paul Hamm and Alexie Nemov as his role model. his favorite athlete is Michael Jordan. Talented Sam went to Corona Del Mar High School, to seek primary and secondary education. He was always good at academics and sports even during his high school days. He later enrolled in the University of Michigan, where he finished with a degree in Psychology, as it was his favorite subject.

As Mikulak emerges from a sports background, he has sports in his genes. His parents never compromise to provide him with all affordable luxuries and never skip his Gymnastic training. He admitted to the Junior National team and became a member from 2007 to 2010. For gaining better experience and learning more about the sport, he joined the university’s team called Michigan Wolverines Men’s Gymnastics team from 2010 to 2014. Initially, he played as an anchor and led his team to name NCAA team title in 2013 and 2014. In his freshman year, he won an individual career-high score of 90.75 and named the all-around title.

As a sophomore, he played with full determination and with precise analysis. For his marvelous performance, he was named undergraduate assistant coach for the University of Michigan Men’s team in August 2014. In August 2015, Sam won his third consecutive national all-around title in Indianapolis. Unfortunately, he resisted participating in the 2015 World Championship due to torn Achilles’ tendon injury. At the 2016 Olympics, he went to secure 7th in the all-around final and 4th in the high bar final. In the same year, he named the 4th consecutive national all-around title. Additionally, he competed in 2 events at the 2017 US National Championships in Anaheim. His performance in the 2018 World Championship in Doha was a blast.

He made it through all odds to led his team to finish at 4th place. in 2019, he won the record-breaking sixth all-around title at the 2019 US National Championships and his margin of victories is considered as the largest of any of his national titles. His 2020, went quiet with uncertainties due to the coronavirus pandemic. However, came out with full-fledged power in the 2021 Us Gymnastics Championships in Fort Worth, and finished with 1st on high bar. As a result, he was chosen by the selection committee to represent the United States at the 2020 Summer Olympics alongside Brody Malone, Yul Muldaur, and Shane Wiskus. Recently, on 27th June 2021, he led the US men’s Gymnastic team to Tokyo.

Mikulak’s social media fans are out of control and going crazy over him. They praise and motivate him to follow the flow and likely Sam too does the same. As a result of his fame, he has reached to 220k followers on his Instagram @samuelmikulak, moreover, his Twitter @SamuelMikulak is loaded with 72.2k followers, where he tweets about his victories and also about the current trending news related to Gymnastics.

Sam is an unmarried sports personality, who was in a goofy relationship with Anissa Cianigraphic, who is a graphic designer living in Huntington Beach. Currently, in 2020, he shared a post, which says that he got engaged to his best friend, Mia Atkins. There were high school sweethearts. At a picturesque lookout point on California’s Catalina Island, Sam dropped to his knee and proposed to her with an engagement ring. The date for their big day is still awaited.  It is known through their social media posts, where they flaunt each other. The athlete is not known to have any past relationships with anyone on and off records. Nor any previous engagements came out to be real.

His successful career states that his pockets are fully loaded. Winning all big accomplishments and prize money, his net worth is on boon at present. His bank balance is loaded with $1 million, which a considerably huge net worth, which he mostly makes out of his artistic gymnastic career. Sam is highly expected to shoe some more efforts towards winning the matches and to take his income to the next level.