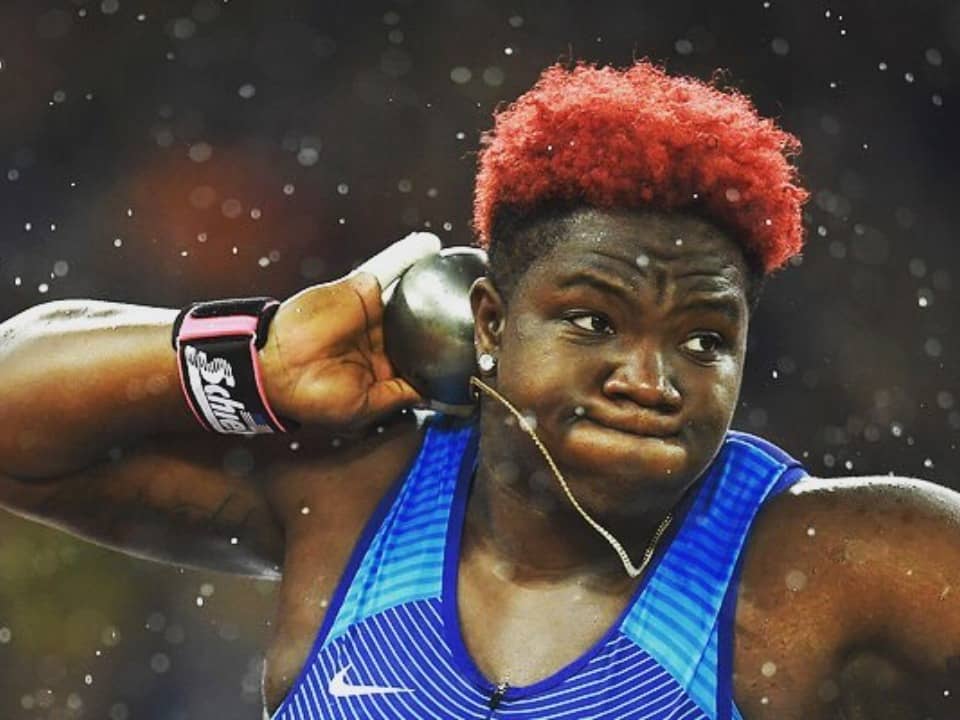 Raven Saunders is a young American Nike Athlete, she competes in the line of Shot put and discus throw. She has won a variety of awards and engraved many titles in her name at the collegiate level during her university time. Further, she won the world junior as well as the Pan American Junior In the year 2014 and 2015 respectively. Moreover, her recent sighting at the 2020 Tokyo Olympics where she secured a silver medal in throwing made her famous among the globe.

Raven Saunders was born in the Charleston city of South Carolina in the United States of America. She was born to Mr. Herbert Johnson and Mrs.Clarissa Saunders. Further, she was born in May of 1996 and she celebrates her birthday every year on the 15th of May. She enjoyed her childhood with her sister named Tanzania. Apart from being into Athletics, she used to enjoy music and playing the piano.

She completed her freshman, sophomore, and other high school years at the Burke High School in Charleston, South Carolina, where she played for her school team, and later in the year 2014, she engraved a record of short put in her name.  Further, she attended Southern Illinois University and after that, she went to the University of Mississippi, during her university time she won an enormous number of championships at a huge level.

She was greatly inclined towards athletics and hence she started throwing short put during grade-9  and made a national high school record for shot put in the year 2014 as a result she was nominated as the Gatorade Female track and field Athlete of the year. Further, in the year 2015, she won the shot put title at Missouri Valley Conference, and in addition to that, she became the first American Junior category Athlete to throw beyond 18meters.

Post to it she improved her skill set and broke the Missouri valley conference record.  In the year 2016, she was placed 12th in NCAA Indoor Championships additionally she broke a record of 23 years when she threw a shot put of 19.33m. in the year 2016, she gave the Olympics trials and made herself to the Olympics. Talking about her recent achievement then, she won a silver medal at the Tokyo Olympics with a shot put throw of 19.96 meters.

Raven Saunders posts very rarely over her Instagram Handel(@giveme1shot__), she has posted a total of just 50 posts and she has a follower count of 43.1K along with that she is verified on Instagram. Further, she tweets regularly on her Twitter handle(@GiveMe1Shot), she has a fan following of 16.3K and she has received her verified badge on Twitter too.

According to some of the prominent sources, Raven Saunders is single as of now and she is not dating anyone right now. Moreover, there’s no past record regarding her dating life which could be fetched from the internet.

She earns a large sum of money because she has already appeared in a substantial number of prominent championships including the NCAA, World Championships, and the Olympics of 2016 as well as in Tokyo Olympics 2020. She is earning from various sources including salary, bonuses, incentives, and Sponsorship from various brands. According to Forbes and other genuine magazines her net worth is estimated to be $1.5Million.