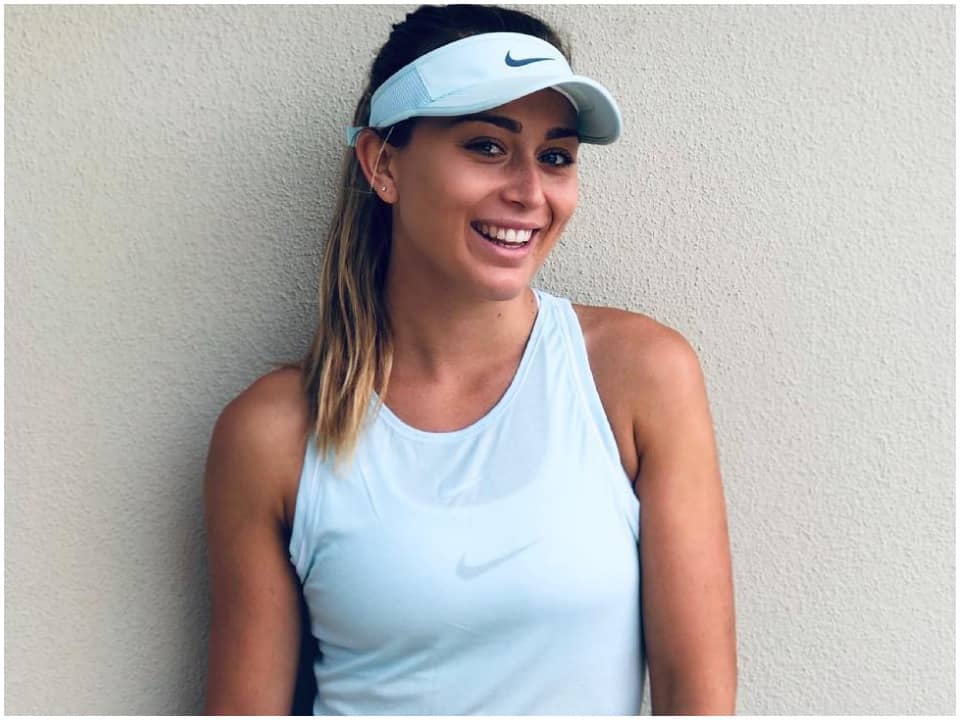 Spanish tennis player, Paula Badosa caught media attention through her gameplay and moves. Her best singles ranking of the world is 34 and has peaked at 359 in the doubles ranking. She considers herself an aggressive tennis player and likes to play short points. Her favorite shot is serving and represents Spain and never lets the country down. Paula is currently facing some of the world-class players in the Indian Wells Masters and reached into the round of 16.

Paula Badosa Gilbert was born on 15th November 1997 in Manhattan, New York, United States, and currently resides in Begur, Spain. She was born to her mother Mireia Gilbert and her father Josep Badosa who both worked in the world of fashion. The family moved to Barcelona when she was 7. She speaks Spanish, Catalan, English, and a bit of French. Maria Sharapova was her role model and inspired her a lot. US Open is her favorite tournament. Talented Paula attended high school for four years at a distance from her family. Not much data is available regarding her higher education and qualifications. Watching her grow and her success rate rising at stake, she seems to be well educated.

After moving to Barcelona, Paula started playing tennis at the club called ‘Playa de Aro’. In order to take her tennis career to the next level, she shifted to Valencia and again returned to Barcelona, when she was 17. She made her debut in the sports world in September 2012 at the ITF Junior Circuit. In February 2014, she became the winner of her first junior singles title at the Grade-1 Mediterranee Avenir in Casablanca while in April, in the same year, she won another Grade-1 tournament called The Trofeo Juan Carlos Ferrero in Villena in doubles. She made her Grand slam debut in the 2014 French Open and reached the quarterfinals in both singles and doubles.

More success came on her way when she finished runner-up at the European Junior Championships in singles. The 2015 French Open, was the end of her junior career, where she was honored with the Girls’ singles title. Later in 2012, she began to play on the ITF Women’s Circuit in Getxo, where in November 2013, she named the first title in Saint Jordi while in march 2015, received a wildcard for the main draw at the ‘Premier Mandatory Miami Open’ and secured first 2 wins on the WTA Tour.

After that, she debuted in the top 100 in the 2018-19 season. Her 2020 season went very well, her biggest result of the year was at the French Open, where she reached her first round of 16 at a major tournament. She defeated 2 Grand Slam champions namely Sloane Stephens and Jelena Ostapenko. At the 2021 Serbia Open, she entered the top 40 for the first time in her career and won her maiden title, after Ana Konjuh retired from the final with an injury.

Paula did participate in popular tournaments in 2021, although she couldn’t perform as per the potential and exited either in the qualifying rounds in the US Open and Ostrava Open. Following this, she managed to reach the round of 16 in the ongoing BNP Paribas Open where she will be playing against Barbora Krajcikova for securing her place in the quarter-final.

Sports personality, Paula has a huge reach of fans over her social media. On her Instagram, she enjoys 106k followers under the username @paulabadosa, where she posts pictures doing fun activities and practicing her play, and getting an expert at it. She also uploads her beautiful pictures along with her friends, competitors, teammates, and family. She has earned 31.7k followers on her Twitter account @paulabadosa, where she updates about her upcoming matches and victories.

There are no traits available about Paula being in any romantic relationships. The only guy that appeared on her social media is Joshua Sorrentino, who is a fashion Model. As per records, she is single at present and is relatively private when it comes to her love life. No details are available about her past relationships. The athlete is still in search of the love of her life.