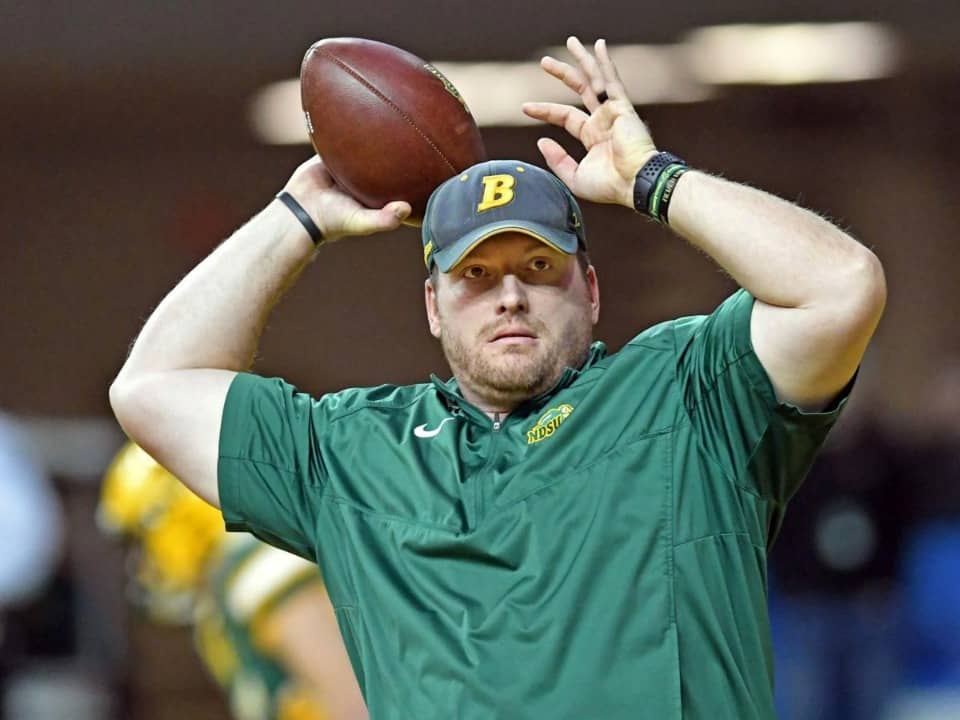 Matt Entz is a talented and hardworking American Football Head Coach for North Dakota State University. He was the defensive coordinator for the Bison from 2014 until he was promoted in the 2018 season. His record till now is 23-3. In 2019 he won the MVFC Coach of the Year award, AFCA FCS National Coach of the Year, and STATS FCS Eddie Robinson Award finalist.

Matt Entz was born on 9th October 1972 in Waterloo, Iowa, United States of America. The names of his parents are Kathy Entz and Ed. At a young age, he used to help his family at the farm and also used to play sports like Baseball, track & field, basketball, and football there. Matt has completed his high school education at a local school. For higher studies, he went to Wartburg College and earned a Bachelor’s degree in Biology. Later he went to Wayne State College in Nebraska and earned a Master’s Degree in Education and exercise science.

Matt kicked off his career as a Football Coach in 1998 where he was a defensive coordinator at Illinois College. Next year, he worked for Wayne State Wildcats. Between 2002- 2009, he worked with Winona State Warriors. In 2010 he joined Northern Iowa and in 2012 he was promoted as defensive coordinator for the same team. In 2013 he was coaching Western Illinois Leathernecks Football. From 2014 till now he has been working with North Dakota Bison Football. Recently he is busy training his team as they will be seen in upcoming games. They also won a match against Albany Great Danes Football.

Matt Entz is married to Brenda. We could not get much information about his wife but all we know is they are happy. They are blessed with two sons named Kellen and Konner. They are residing in Fargo, North Dakota, United States of America.

Matt Entz gained widespread fame after providing valuable tips as a Football coach for various university teams. Currently, he is the head coach at North Dakota State University. He has inked a 5-year deal where University will pay him a $300,000 base salary plus $80,000 additional compensation. According to our sources, Entz has an estimated wealth that stands somewhere between $0.8 to $1 Million USD.