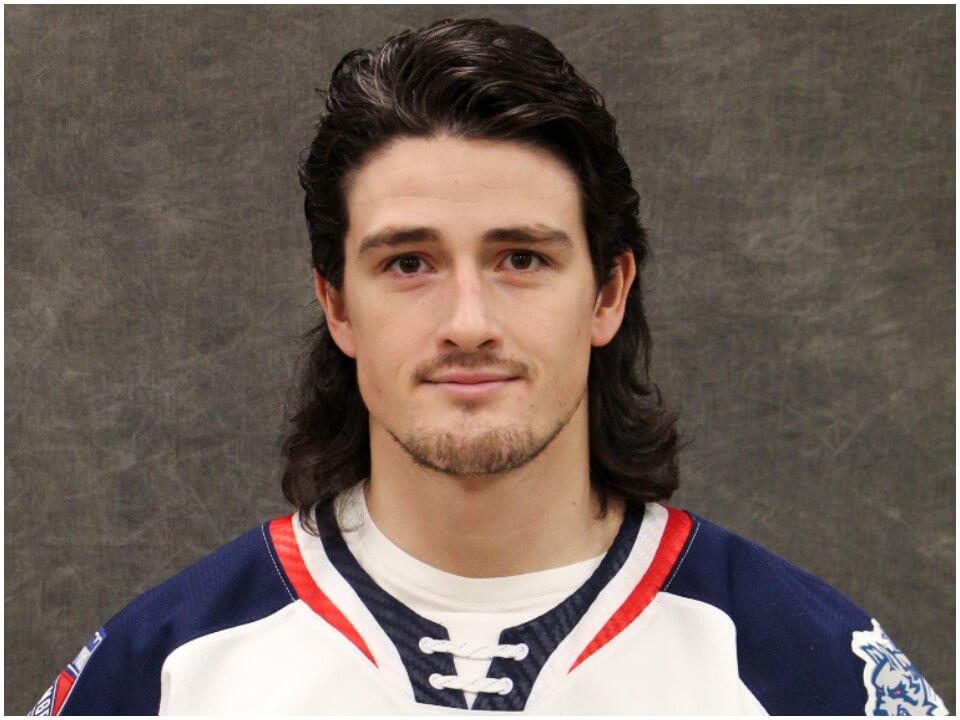 Mason Geertsen is a Canadian professional ice hockey player who plays at the defense position for Hartford wolf pack at the American Hockey League and recently in 2021, he signed a contract with New York Rangers to play at the National Hockey League.

Mason was born on 19th April 1995 in Drayton Valley, Alberta, Canada to Larry and Kathy Geertsen. He was born in a Christian family and grew up in Alberta and belongs to the white Caucasian ethnicity. Mason is known to have two older sisters Larissa Geertsen and Kat Geertsen but he has not shared much about them. Living in Alberta, he has always experienced snow and was interested in ice hockey since he was a kid. He started playing professional hockey early on in his teenage years.

Mason has not shared much about his education and background but it is known that he completed his high school studies from Salisbury composite high school in Drayton valley in Alberta and graduated in 2013. Since he was drafted right after graduating from high school, he is not known to have joined any college or university but it is believed that he has taken up training and extensive coaching in Ice Hockey from various coaches.

Mason started playing ice hockey at an early age while he was in high school and played bantam hockey as captain of Leduc oil kings in the local Alberta Major Bantam Hockey league. He also played Midget hockey for the team Sherwood Park Kings in the Alberta Midget Hockey League. His game was impressive and helped him to get drafted in the 18th overall of the 2010 Western Hockey League Bantam Draft. He was drafted to play at the Western Hockey league for the team Edmonton Oil Kings.

In 2011, he played at the Canada winter games for team Sherwood and the team won a bronze medal. In 2012, he went to represent Canada in the under 17 world Hockey Challenge in Windsor, Ontario. He finished the championship in 5th position. Later, in 2013, he started playing for Vancouver Giants in the WHL after he was exchanged in the October trade. The same year, he was ranked at 59th position amongst the North American skaters in central scouting and was drafted in the 93rd overall by Colorado Avalanches of the 2013 NHL draft.

He signed a three-year entry-level contract in 2015 with Colorado Avalanche and made his debut in the American Hockey league with the team Lake Erie monsters. He also played the 2015-16 season of WHL with the Vancouver Giants. In the 2016 season, he played at the American Hockey League for the San Antonio Rampage and appeared in 36 games. The same season, he also played the ECHL for Colorado Eagles and lead the team to win its first Kelly cup championship.

Meanwhile, his contract with the Colorado Avalanche ended in 2019 and he was invited to attend the New York Rangers’ training camp. After his excellent performance at the camp, he was signed for a one-year contract to play at AHL with the Hartford Wolf Pack.  He played in the 2019-20 season of AHL and his contract got a year extension due to the cancellation of the season due to Covid19. In 2020, he played the season at AHL and his performance led him to be signed by New York Rangers. He was signed to a two-year contract by New York Rangers in March 2021 to play for the team in NHL.

Mason has not shared much about his personal life but is known to be committed in a relationship. He is currently dating a grad student and fitness model named Clarity Engel. The couple has not revealed much about when they started dating but is often seen posting pictures together on their Instagram accounts. They have often had a couple of photoshoots and posted shots on their social media. They often like to go fishing, hiking and like to go on adventure trips together. Mason is a great lover of animals and recently he adopted a female rescued puppy named Meeka. The couple is currently settled in Sherwood Park, Alberta with their puppy Meeka.

Mason has been a professional hockey player since 2013 and since then has played at various seasons of WHL, AHL, ECHL, and well as international and national tournaments. He has earned through various contracts and winning in tournaments over the years. Mason has managed to build himself a fulfilling and enjoyable lifestyle full of travels and trips. He also recently bought himself a RAM2500 truck. His estimated net worth as of 2021 is around $601,500.