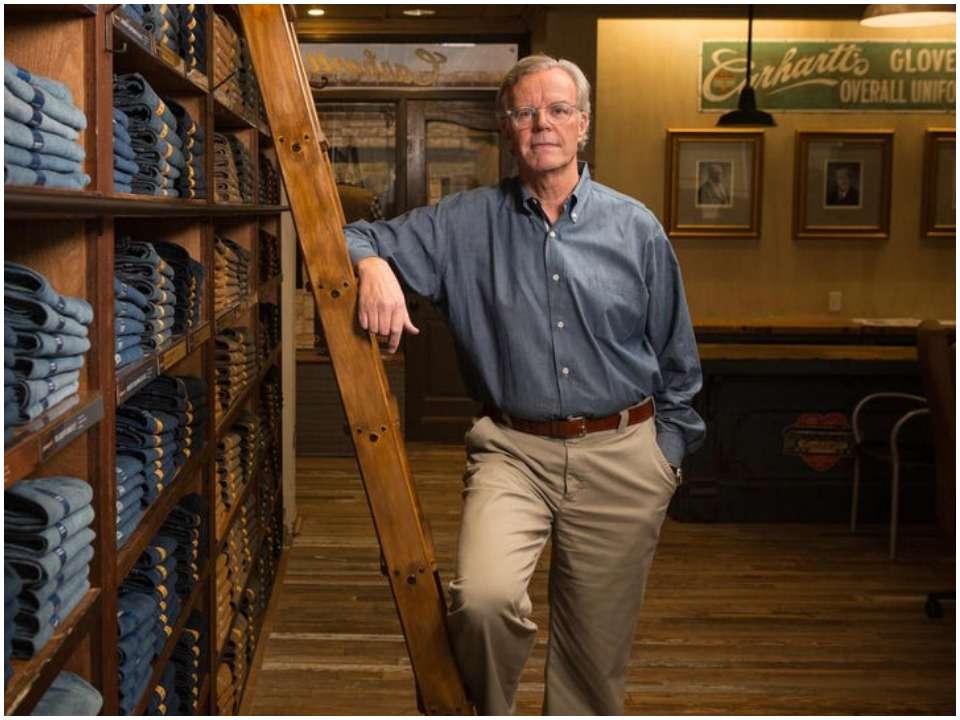 Mark Valade is the CEO of Carhartt and recently caught the media attention after he sent an official email to the employees of his company stating that the company needs the workers to be vaccinated against COVID-19. He made the workers get vaccinated by 15th February 2022. Dearborn, Mich.–based workwear company was founded in 1889 and has made vaccination mandatory for all workers. Valade is the great-grandson of the company founder Hamilton Carhartt. The company is owned by the whole family and is also operated by the family only. Now, the matter is that the email and its screenshot let “Carhartt” trend on Twitter.

People are now asking for the company’s protection and the worker’s health. While some others are asking to boycott the brand that is forcing its employees to get vaccinated. Mark Valade shares ownership of the company with his mother, Gretchen Carhartt Valade. The company was first launched to create denim for railroad workers and it has now expanded its establishment with the making of ultra-durable clothing for tough working conditions. Carhartt has seen great success in the market of clothing. As of 2014, it possesses revenue to be around $630 million.

As per the online records, Mark was born on 23rd June 1953 and he is 68 years old at the moment. Maureen Keiles Valade, Robert Chas Valade, Gretchen R Valade, Kyle Valade, and Cameron P Valade are among his family members or relatives because no proper clarification was done about their relationship. Mark is currently living on Lewiston Road, Grosse Pointe Farms, Michigan and he is married as well.

Carhartt remains a leading workwear brand in the US. It was established in 1889 and since then it has been working for the American laborers. The best part of Carhartt is that it has a rich heritage of working. It has been supplying the workers with apparel for more than a century. The brand has been working with the motto of “outworking for them all”. To date, the company is providing quality products to the customers ensuring the durability and comfort of all its customers in the form of its products. The beginning of the brand was made when Hamilton Carhartt left school to start a furniture business in 1882. Later in 1889, he converted the business to a men’s wear shop focusing on apparel manufacturing.

For the first time, the company kicked up to two sewing machines and a half-horsepower electric motor. In the beginning, the company Carhartt failed to deliver the products and make a profit but the best part was that being the organizer and the founder Hamilton Carhartt didn’t give up all the things in one go. Instead, he met the railroad workers asking them about how they want their garments to look. By 1925, the company progressed and had its plants across the globe at places like New York, Liverpool, Paris, and many more. The brand set up the subsidiary called Hamilton Carhartt JUnior. The company focused on young men’s apparel including shoes, pants, shirts, and overall dressing. The division was notable. It expanded its range and became one of the top brands with a long-term vision.

Mark has not given details regarding his family background, although he is married for sure. The couple is living in a Single Family Dwelling Unit home along with their children in Lewiston Road, Green Pointe Farms, Michigan. They started living in this property whose value is estimated at around $1.8 million from 2017.

The American workwear brand called Carhartt has now found itself in the crossfire of the culture wars. The CEO Mark Valade has published a letter informing employees of the company to continue with the working space and mandate the coronavirus vaccinations. The information has leaked online drawing both support and ire. On the other hand, Carhartt has verified the content of the email. He sent the email last Friday and the message he sent to all the employees has gone viral on Twitter with TWTR, +0.13% as of Tuesday, i.e, 18th January 2022.

The email says that we want to put the workplace on the top priority list of safety. The workplace has mandated the supreme court’s recent ruling. The company also says that it doesn’t want to impact the core value. Let us tell you that the Supreme Court may have blocked the Biden administration’s attempt stating that the business with 100 or more employees may be required to get COVID-19 vaccination or frequent testing but the giant apparel company of Carhartt is moving ahead with its vaccine plans.

Today, Carhartt is living with its success and possesses more than 2000 employees in Kentucky, Tennessee, and Detroit. In one of his interviews with Forbes, Mark Valade owns Carhartt and shared the strategies to continue to work with the changes. He believes that the company is focusing on its core value, though the strategies are changing with time. It will continue to develop the best apparel for active workers. Today, the brand enjoys its collaboration with different brands like BAPE, A.P.C., Vans, Vetements, and many more.